It's the closest we have come to a naturally functioning hand 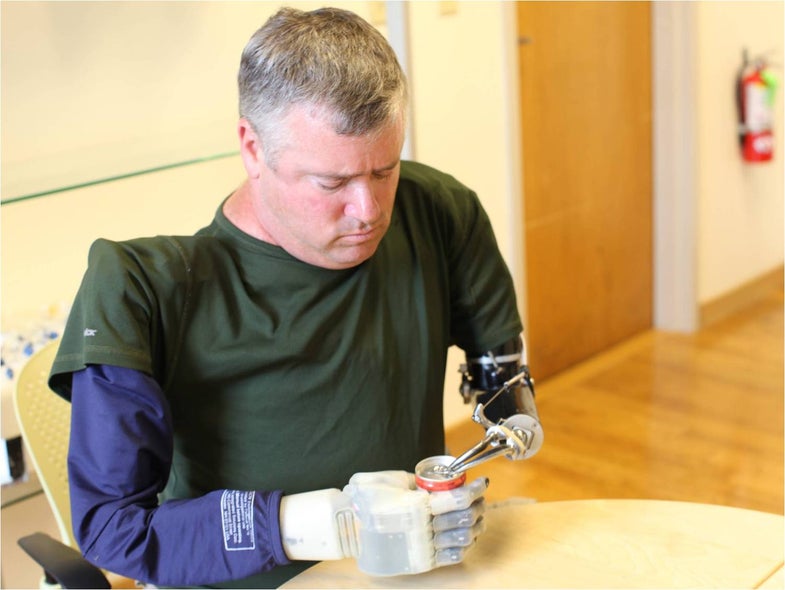 A 28-year-old man, paralyzed due to a spinal injury, was able to feel a physical sensation thanks to a hand prosthetic attached to his brain, DARPA announced on Friday. Though neuroprosthetics have become very advanced in recent years, enabling paralyzed patients to move their artificial limbs, this is the first experiment in which the connection worked the other way and the patient was able to regain some sense of touch.

“We’ve completed the circuit,” DARPA program manager Justin Sanchez said in a press release. “By wiring a sense of touch from a mechanical hand directly into the brain, this work shows the potential for seamless bio-technological restoration of near-natural function.”

Touch is one of our least-understood senses. If someone hands you an unknown object, individual nerve pathways transmit different pieces of information–an object’s weight, temperature, smoothness–up the arm and spinal cord and into the brain, which compiles an image of what you’re holding (researchers still aren’t quite sure how the brain does this). But researchers have had a hard time replicating this sensory ability with prosthetics. In some experiments, patients have been able to move prosthetic limbs just by thinking about it–a chip implanted in the brain translates the electricity in the brain’s motor cortex into instructions for the prosthetic to move. But engineering prosthetics so that they can transmit information to the brain had so far proven elusive.

In this experiment, the researchers used wires to connect a prosthetic arm to chip’s placed on the patient’s motor cortex, responsible for movement, and sensory cortex, where the brain compiles sensory information. The prosthetic hand contains torque sensors that can detect minute changes in pressure. Once the brain and arm were hooked up, the researchers blindfolded the patient, then gently touched each of the prosthetic fingers. The patient was able to identify when the hand was touched, and which finger, with nearly 100 percent accuracy. He said he felt as if his own hand was being touched, according to the press release.

The paper outlining the experiment hasn’t yet been accepted by a scientific journal, or subject to peer review. So, at this very preliminary stage, we have to be a little skeptical of these findings until they’ve been vetted by the scientific community. But if the research does live up to this initial excitement, prosthetics might take a huge leap closer to imitating how our limbs naturally work. And though they aren’t yet able to sense all the information that our hands can, prosthetics that can feel would improve the lives of patients all over the world.