The Journal of Cosmology recently published a special issue concerning the requisites for and perils inherent in a manned mission... 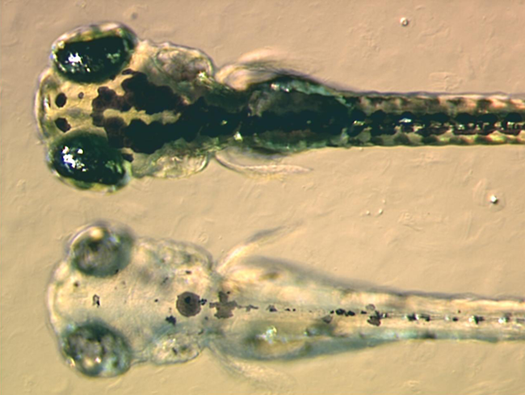 The Journal of Cosmology recently published a special issue concerning the requisites for and perils inherent in a manned mission to Mars, which appropriately touched upon that taboo topic that NASA never talks about: sex in space. But while it might seem like a natural inevitability, sex in space might not be such a great idea, at least from a reproductive aspect. Example: A recent study shows zebrafish embryos brought to term in microgravity develop cranial defects.

Those defects aren’t immediately problematic necessarily, but they’re certainly not good. In the zebrafish, the abnormalities arose in the neural crest cells, which develop cranial cartilage and bone. Assuming the same thing happened in a human embryo, the first-gen spacebaby might not be in such bad shape, but successive generations could suffer.

The research involved placing zebrafish embryos in a bioreactor that spun to mimic microgravity during the fertilized eggs’ development. When the eggs hatched, researchers stained some of the fishes’ cranial cartilage and found that parts of cartilage that support the gills–parts corresponding to the human jaw–were altered. Several months later, when the fish reached adulthood, they stained a few more of the fish, finding they also were abnormal; bone at the base of the skull had buckled on some of the adult fish.

That’s a problem, especially considering previous microgravity experiments on zebrafish have shown similar abnormalities developing in other parts of their bodies. While bioreactors have been previously criticized for creating an imperfect analog to the conditions of outer space, microgravity, it seems, isn’t too kind to embryos designed for life on solid, gravity-laden ground.