Most asteroid diversion schemes tend to involve some kind of impact – an explosion, a crash, a violent shove –... 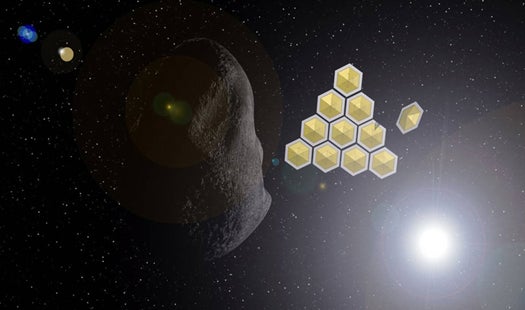 Most asteroid diversion schemes tend to involve some kind of impact – an explosion, a crash, a violent shove – but a French researcher has proposed an intriguing plan to alter the course of the asteroid Apophis before it swings into Earth’s neighborhood in 2036: offer the asteroid some shade. A fleet of solar sail spacecraft could shift Aphophis’s course by simply shielding it from solar radiation, the researcher says.

The idea is to eliminate the so-called Yarkovsky effect, a phenomenon that produces a tiny amount of thrust on the warm side of an asteroid (named for Russian engineer I.O. Yarkovsky). As the sun heats one side of the rock it emits more thermal radiation on its near side, which affects the asteroids orbit ever so slightly. Small asteroids emit too little radiation to matter and large asteroids are too big for the effect to move them, but Apophis is in that medium-sized goldilocks range that is just right.

A group of solar sailing spacecraft flying in formation could get between Apophis and the sun, blocking solar radiation and elimination the Yarkovsky effect, altering Apophis’s orbit significantly over time.

Of course, it’s not easy to predict Apophis’s trajectory that far into the future with absolute certainty, and there’s no guarantee nudging the asteroid might not make things worse. And, as critics have pointed out, if you’re going to launch a mission all the way out to Apophis you might alter its orbit just as easily by – that’s right – crashing a spacecraft directly into it.

Regardless, the strides being made in solar sail tech are promising, and the versatile way they are being employed – even in theory only – show a lot of potential for the nascent technology.