DARPA Asks for a Flying Car, Gets a Dual-Rotor Road Warrior Turned Helo

Just after the new year, DARPA put out a broad agency announcement requesting a flying car, specifically a one-to four-person,... 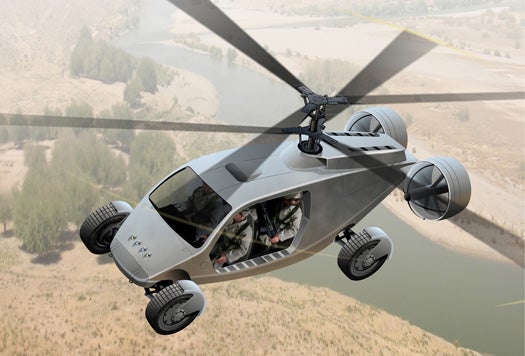 Just after the new year, DARPA put out a broad agency announcement requesting a flying car, specifically a one-to four-person, vertical takeoff and landing-capable vehicle that can negotiate off-road conditions as well as take to the skies. Today, Fort Worth-based AVX Aircraft has responded with a proposal, releasing some mock-ups of a dual-rotor, ducted-fan driven aircraft that’s also road-ready.

AVX says the four-seater will be able to carry a 1,040-lb. payload 250 miles on a single tank of fuel, peaking at 80 miles per hour over land and 140 miles per hour in the air. It’s coaxial rotor design would certainly satisfy the vertical take-off and landing requirement, and at least the sketches make it look off-road rugged. Unfolding the rotor blades for flight should convert the vehicle from road warrior to aircraft in just one minute.

Of course, sketches are only sketches and it will be interesting to see if AVX can flesh this design out into a practical battlefield vehicle that reliably complies with the written laws of physics and the unwritten practicalities of combat. But as concepts go this one is pretty cool. Feel free to pull the pic above into Photoshop and add the air-to-surface armaments of your choice. 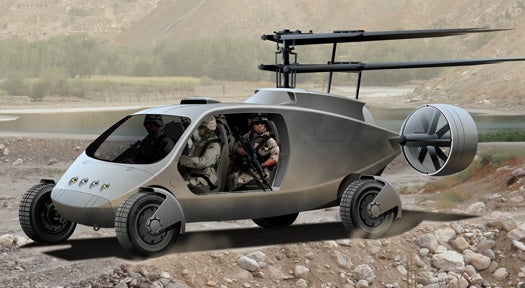