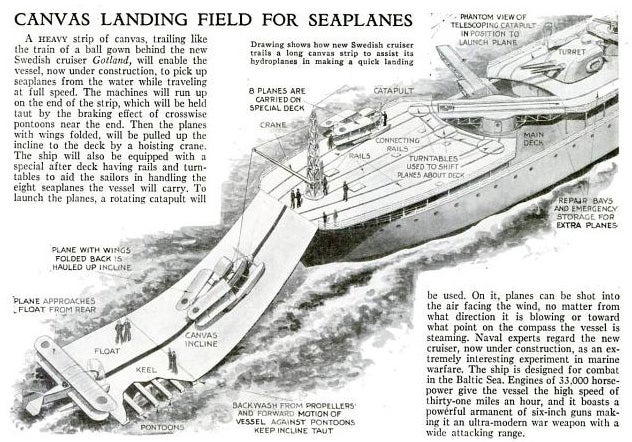 By 1933, World War II was well underway so naval experts busied themselves by coming up with better combat technology. Engineers planned that the H.M.S. Gotland, a Swedish cruiser, would come equipped with a canvas landing strip for seaplanes. While kept afloat by pontoons the landing field would pick up seaplanes while the cruiser was moving at full speed. A rotating catapult on the deck would be capable of launching planes in any direction. Alas, the canvas landing field never caught on, and seaplanes aboard the Gotland suffered damage caused by wave turbulence. In 1944, the cruiser was converted into an anti-aircraft cruisers. After the war, the Swedish military used her as a training center. Read the full story in "Canvas Landing Field for Seaplanes".
SHARE

For as long as ships have been around, naval powers have competed for supremacy on the seas. After the steam engine’s invention in the 19th century, warship design underwent a major upheaval, culminating in an arms race for the best battleships and cruisers. Some of these ships went on to become famed World War I and II icons. Others never made it past the blueprint stage. You’ll find that when it comes to naval warfare, the Popular Science archives favor both the formidable and the funny speculations, as long as they contribute to a bright (Allied) future.

World War I was the era of Dreadnoughts, or big-gun battle ships powered by steam turbines. During the interwar period, Great Britain and Germany emerged as the two leading contenders for naval supremacy. Even though the Treaty of Versailles limited Germany’s navy to a series of minor, weight-controlled ships, German engineers still managed to release a few deceptively lightweight vessels into Allied waters. Their heavily-armed pocket battleships changed history while serving during the Second World War, but for other projects, like Germany’s proposed submarine cruiser, the time simply wasn’t right.

Just because a ship didn’t make headlines doesn’t mean it couldn’t capture our imaginations. The interwar and postwar periods led us to wonder what the next great conflict would look like. Could we merge battleships and submarines? Could we design supercarriers capable of holding jet bombers? Two decades before the Navy promoted aircraft carriers to capital ship of the fleet, engineers experimented with a converted tanker that could dock airships in mid-flight. Italy, still years away from becoming a major Axis power, released plans for a semi-submersible equipped with 18-inch guns and a superstructure coated in cork.

Many of these ships never had their moment; others, like the battleship, dominated the seas only to become obsolete within a matter of decades. What can we say, some vessels simply work better on the page than on the sea, so click through our gallery to see World War I and II’s great ships in their prime. 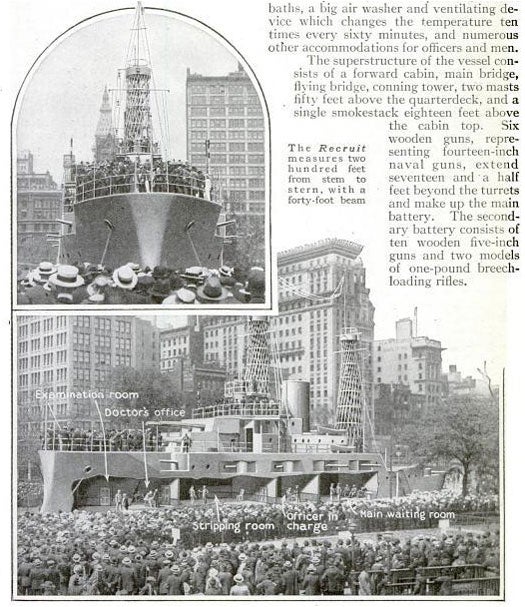 During World War I, the US Navy commissioned a land-based dreadnought battleship as a recruiting and training center for the New York city district. Located in Manhattan’s Union Square and christened the U.S.S. Recruit, or the Landship Recruit, this fully rigged battleship accommodated 39 bluejacket guards from the Newport Training Station under the command of Acting Captain C.F. Pierce. Every day, crew members would live as though they were at sea: the would do laundry, clean the deck, attend classes, and stand guard. Meanwhile, regular citizens would tour the ship to improve their understanding of life aboard a warship. As you can see from the left, the U.S.S. recruit contained waiting rooms, doctor’s offices, shower rooms, and even a ventilating device to regulate temperature. As far as weaponry goes, the ship used several wooden models of guns to represent rifles and naval guns. The New York Times reported that the Navy recruited 25,000 men through the ship. After the War, the Recruit was decommissioned and dismantled for a planned relocation to Coney Island, but to this day, no one knows what fate befell it. Read the full story in “The ‘Recruit’ — Our Only Land Battleship” 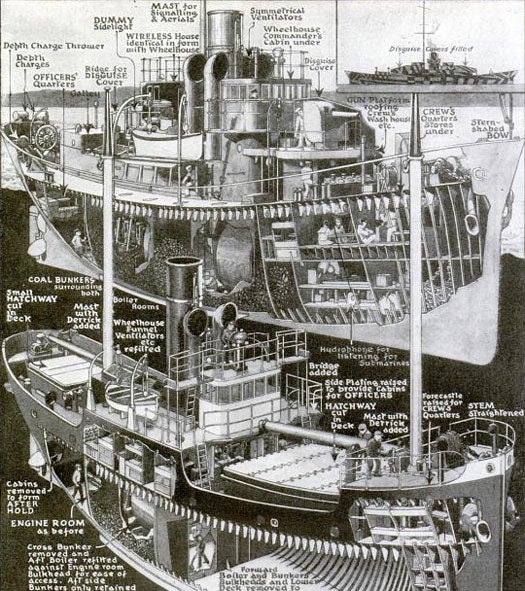 From Gunboat to Cargo Boat: November 1920

Gunboats are a warship used for carrying guns to assist in coastal combat. During the first World War, the Kilmore served as a gunboat for the Royal Navy, and afterward, she was converted into a cargo ship capable of holding 570 tons of cargo at a speed of ten knots. The image at the top left shows the Kilmore in her original form while the image below shows the modifications. During wartime, the Kilmore’s stern-shaped bow made it difficult for enemy fleets to tell whether she was coming or going. As a cargo ship, she had a reduced deck with a mast where the false stern use to be. The project was such a hit that a similar conversion was planned for seven other ships in her class. Read the full story in “A Gunboat in War–A Merchantman in Peace” 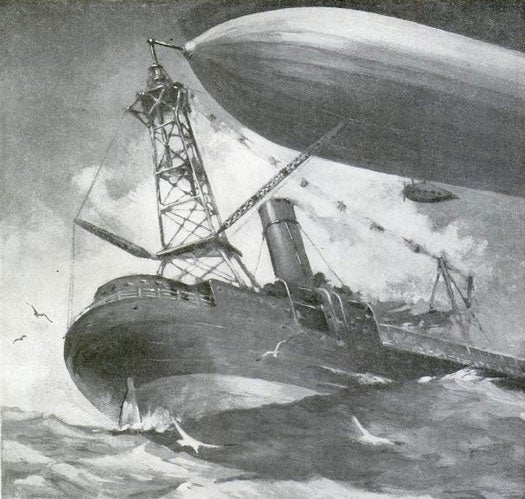 The interwar period is characterized by social turmoil and political unrest. To prepare for the Second World War, the Navy conducted maneuvers for testing the usefulness of airships in maritime combat. They fashioned ships such as the converted tanker Patoka, pictured left, with mooring masts capable of steering an airship to safety. After completing a successful maneuver with Patoka, the airship Shenandoah was assigned a place in the Pacific Fleet. Read the full story in “Airship Takes Its Place on Battle Lines at Sea” 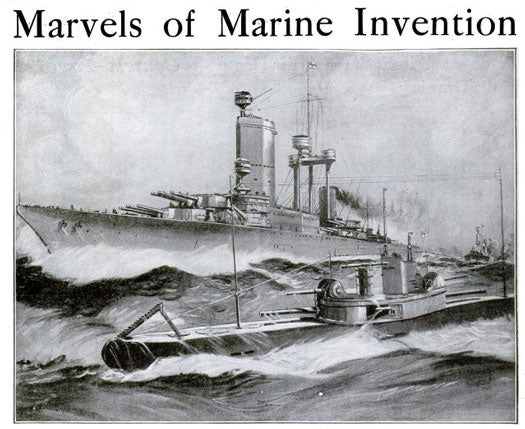 In 1925, experts claimed that warships were going out of style, but tension between Great Britain and Germany was still strong as ever. Although the Treaty of Versailles limited the latter’s navy to a small amount of surface ships, they exploited the treaty’s loopholes by building vessels that were deceivingly small. For instance, the Admiral Graf Spee got around the 10,000-ton, 11-inch gun limit by using weight-saving techniques like electric arc welding. Prior to the Admiral Graf Spee‘s completion, however, a German naval architect designed a giant submarine cruiser, which appears considerably smaller than the era’s conventional battleships. Sailing nearby is the H.M.S. Nelson, Great Britain’ 30,000 ton, 16-inch gun battleship. Read the full story in “Marvels of Marine Invention” 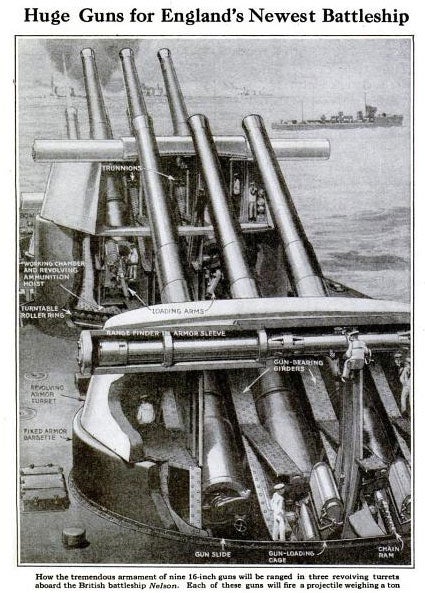 Speaking of the H.M.S. Nelson, here’s a picture of her impressive weaponry. Nine 16-inch guns mounted on three turrets, in addition to a secondary section of 6-inch guns, gave the Nelson and her sister ship Rodney the world’s most powerful armament of any battleship. The guns’ location forward of the ship’s superstructure also made the Nelson class of ships distinctive in form. Rumor has it that shortly after the release of Disney’s Snow White, the guns were nicknamed after Mickey Mouse, Minnie Mouse and the seven dwarves. During World War II, Nelson served in the Mediterranean, Atlantic, and Indian Oceans before being decommissioned in 1949. Read the full story in “Huge Guns for England’s Newest Battleship” 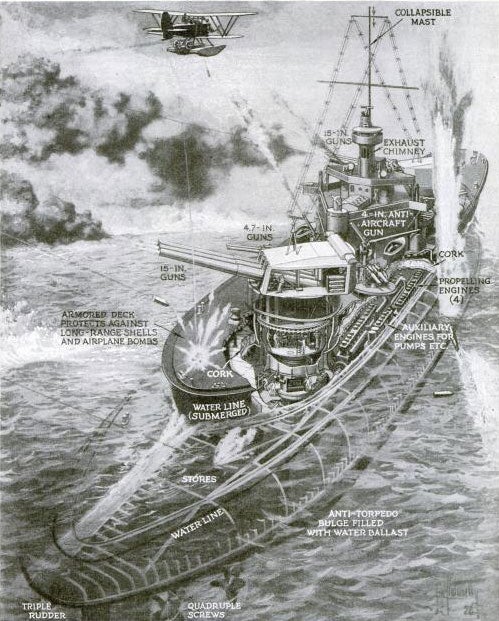 Strange is right. Although Italy’s navy was overshadowed by Germany and Great Britain’s, Italian naval engineers envisioned vessels that could hold their own during combat with more advantaged flees. Nabor Soliani’s semisubmersible battleship was designed so that even if its superstructure were destroyed, most of the ship would be protected by the water, and thus intact. An armor of cork around the superstructure would keep the ship afloat while deflecting shots. Meanwhile, torpedoes hitting the “anti-torpedo bulge” filled with water would merely slow down the ship instead of causing it to sink. Read the full story in “Strange Warship Defies Attack”

By 1933, World War II was well underway so naval experts busied themselves by coming up with better combat technology. Engineers planned that the H.M.S. Gotland, a Swedish cruiser, would come equipped with a canvas landing strip for seaplanes. While kept afloat by pontoons the landing field would pick up seaplanes while the cruiser was moving at full speed. A rotating catapult on the deck would be capable of launching planes in any direction. Alas, the canvas landing field never caught on, and seaplanes aboard the Gotland suffered damage caused by wave turbulence. In 1944, the cruiser was converted into an anti-aircraft cruisers. After the war, the Swedish military used her as a training center. Read the full story in “Canvas Landing Field for Seaplanes” 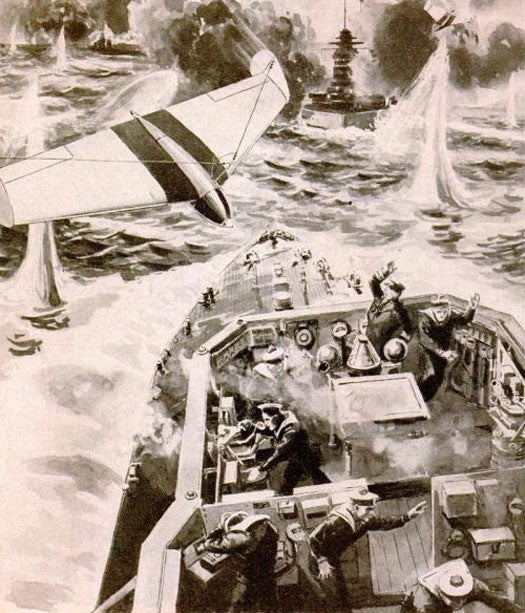 The Future of Naval Warfare: July 1938

When it comes to combat, bigger isn’t always better. A year before World War II began, we predicted that future war machines would become smaller to allow for accurate control. For instance, electrically-powered one-man submarines lowered from battleships would let someone fire a deadly missile at close range. Also, forget aircraft carriers, the future would be all about torpedo warfare on the high seas. Guided by radio control and manned by built-in motors, the torpedoes would cause havoc by landing directly onto an enemy warship. Read the full story in “War Machines Go Midget” 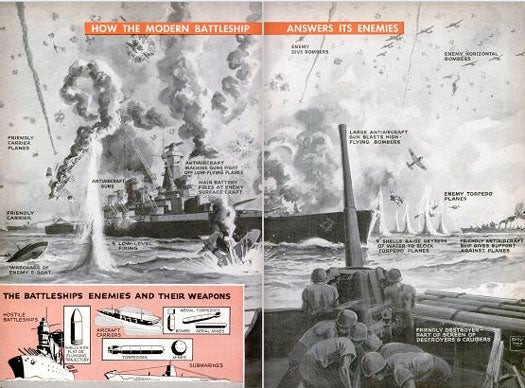 The Uncertain Fate of Battleships: April 1943

By World War II, it was clear that battleships were in a period of decline. Despite their role in guarding important convoys and their big guns, battleships were vulnerable to smaller weapons, like mines. Moreoever, they could not operate within range of enemy airbases and coast-defense guns. The prominence of airplanes at sea had rendered battleships into slow, expensive torpedo targets. Just a year before the last battleship launched, however, we made a case for the powerful old vessels. Torpedoes causing problems? Battleships used the heaviest armor out of any class of warships. Battleship design had adapted to aerial warfare by increasing antiaircraft fire power, or sky guns capable of hitting dive bombers with 400 quarter-pound shells a minute. Finally, since a battleship never travels alone, it will unlikely be completely open to attack. Read the full story in “Why Do We Keep on Building Battleships?” 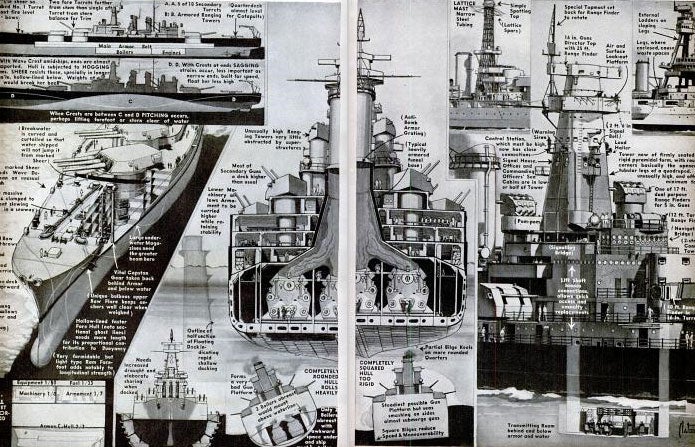 Inside a Battleship: October 1943

In the end, the aircraft carrier proved too powerful. Battleships went out of service and many were converted into museums. The last two were removed from the U.S. Naval Vessels Register in 2006. Although we’ll never see a battleship in service again, and many of us will never make it out to one of the preserved models, this meticulously illustrated diagram should gives you a fairly thorough understanding of battleship design. Read the full story in “How a Battleship Works” 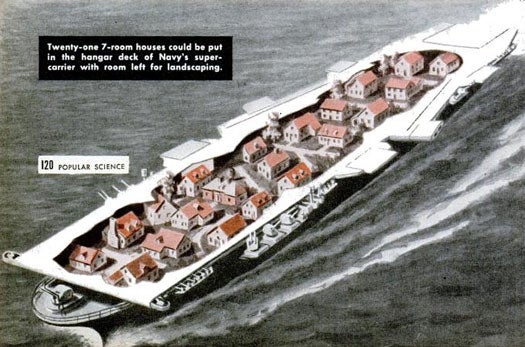 Supercarriers of the Future: January 1949

No, aircraft carriers of the future won’t house suburban neighborhoods, but according to our post-war predictions, supercarriers would one day grow large enough to hold 21 seven-room houses, including backyards, on their hangar decks. Almost immediately after the war, the Navy contemplated redesigning aircraft carriers to accommodate jet planes, which they believed could only get bigger. Their dream supercarrier would have a flight deck more than 1000 feet long. In comparison, the Midway was only 932 feet long and had obstructions that would hinder the paths of jet planes. Supercarriers of the future would use huge stern elevators to lift planes for launching, while escalators would carry crewman to the runways. Read the full story in “Why the Navy Wants Supercarriers”
Military
galleries
Popsci Archive