In a 22-hour operation, a Spanish man received the entire face of a donor 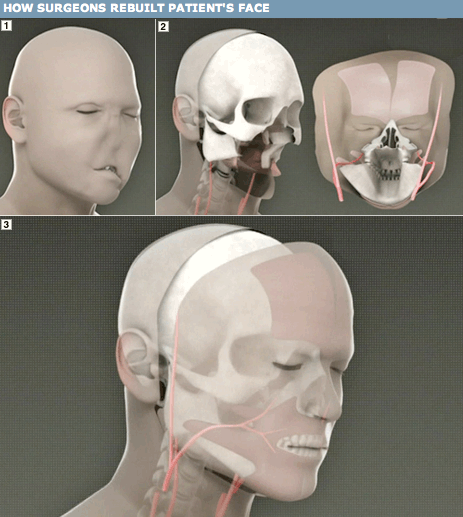 A team of 30 Spanish doctors announced Friday they had completed the world’s first full-face transplant.

In a 22-hour-long operation on March 20, a man injured in a shooting accident received the entire face — skin, muscles, cheekbones, lips and teeth — of a donor.

The man, whose name was not released, has since seen himself in the mirror and was calm and satisfied, the BBC reports.

From his hairline down, the only scar is a wrinkle running across his neck. There’s no word on whether he looks like John Travolta or Nicolas Cage, however.

“It is a little bit like the movie [Face-Off],” Dr. Joan Pere Barret, the lead surgeon at Vall d’Hebron University Hospital in Barcelona, told AP.

“If you look him in the face, you see a normal person, like anyone else we have as a patient in the hospital,” Barret added.

The man is a Spanish farmer between age 20 and 40 who shot himself in the face by accident five years ago, according to the Times of London. He had been unable to breathe or swallow and had trouble speaking. He had undergone nine failed operations before the transplant.

Meanwhile, a doctor in Britain says he plans to complete a total facial transplant — including parts of the throat and the entire scalp — sometime in the next year. Doctors in Britain stopped short of calling the Spanish procedure a full transplant, but acknowledged it is the most complex to date. It included more bone and much more of the lower part of the face than previous surgeries, according to the BBC.

In a four-hour operation, veins, arteries, skin, muscle and bone were taken from a donor cadaver. Halfway through that surgery, the recipient was anesthetized and his previous skin grafts were removed. Using microvascular surgery, doctors spent the next day stitching the donor’s blood vessels into the recipient’s.

Only a handful of facial transplants have ever been performed. American Connie Culp received a facial transplant after she was disfigured by a shotgun blast in 2004. Doctors at the Cleveland Clinic replaced 80 percent of her face in December 2008.

French doctors were the first to complete a partial facial transplant five years ago. Isabelle Dinoire, 38, received a new nose, chin and lips after she was bitten by a dog.