Tobacco May Keep Us from Catching the Flu 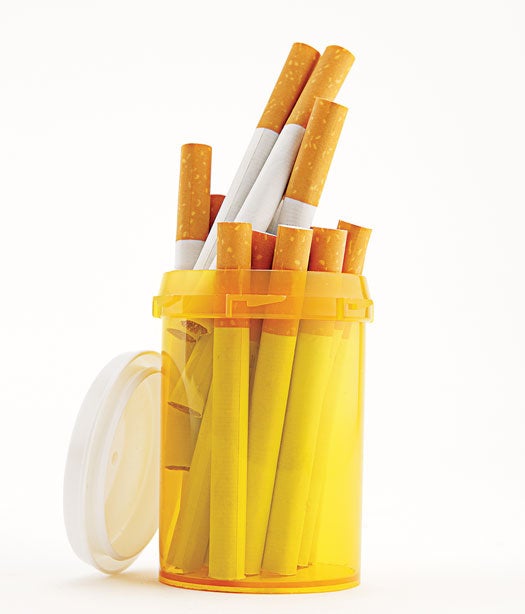 Cigarettes kill more than four million people a year, but a cousin of the tobacco plant could help protect the rest of us from a major flu pandemic. This February, Darpa, the Pentagon’s R&D branch, awarded $40 million to Texas A&M University and pharmaceutical manufacturer G-Con to launch Project GreenVax, an effort to speed vaccine production by growing it in tobacco. First, scientists engineer bacteria to carry the latest flu markers and wash them over Nicotiana benthamiana tobacco plants. The bacteria dump the DNA into the plant’s cells, which follow its instructions to churn out the flu protein. Technicians then grind up the leaves to extract the protein. Injected into a person, the protein works like any vaccine, training the body to attack the flu virus.

The entire process is about a quarter of the cost and three times as fast as the conventional method, growing live viruses in chicken eggs, a system so sluggish that it contributed to vaccine shortages last fall. Next year the team plans to do a demonstration production run of 10 million H1N1 vaccines—about 10 percent of a seasonal supply—and start a tobacco-made vaccine in clinical trials, which the vaccine must pass before it could be distributed.

Researchers think a similar approach could produce proteins to treat people who are already sick. This winter, Arizona State University biologists demonstrated the first tobacco-made treatment to cure disease in mice: a protein that gums up the part of the West Nile virus that binds to animal cells. They hope to kick off clinical trials in about five years.

As plant-grown medicines gain industry popularity, this particular species of tobacco could dominate the market. Like its cash-crop cousin, it’s fast-growing and cheap. It easily takes up foreign DNA, points out Qiang Chen, the Arizona project leader, and tobacco is much lower-maintenance than chicken eggs and other animal-based methods: “It just needs water, minerals and sunlight.”