The Big Question: How many people will it infect this year? 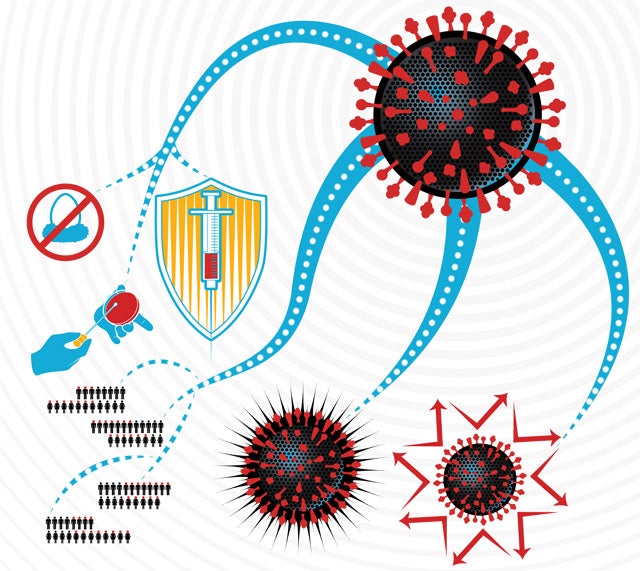 Flu season in the Southern Hemisphere is almost over—and now it’s heading back our way. At the time this issue went to press, there were more than 162,000 confirmed cases and 1,154 deaths worldwide from “novel H1N1,” a.k.a. swine flu, but the Centers for Disease Control and Prevention believes this figure is a gross underestimate, especially since only a fraction of people who have the flu go to the hospital.

Now that the Northern Hemisphere is entering flu season, scientists fear that the virus may come back with a vengeance, compounding the impact of conventional flu, which alone kills about 36,000 people in the U.S. annually. The trouble is that this H1N1 is so genetically different from traditional flu strains that our bodies have few defenses against it and ordinary flu vaccines are useless. What will the virus look like this winter? How rapidly will it spread? How will it mutate? There are too many variables to accurately predict infection rates and death tolls, but our ability to contain the virus hinges heavily on four factors.

1. Make Vaccines
A vaccine could lower flu risk by 70 to 90 percent—if the virus doesn’t evolve into a new strain first. As of press time, the first human trials of a vaccine were beginning in the U.S., and officials are hopeful large quantities will be available this winter. Five pharmaceutical companies are ramping up production under contract from the government. One of those, Novartis, has developed a much faster method for making vaccine, using individual cells instead of chicken eggs, the traditional method. Adapting a virus to grow in eggs can take weeks.

H1N1: Refers to two particular proteins on the flu’s surface, hemagglutinin (H) and neuraminidase (N). These protein structures differ depending on the viral strain; most flu strains that infect humans contain either H 1, 2 or 3, and N 1 or 2.
Viral shedding: Another name for “being contagious.” How long people with novel H1N1 are infectious is still unknown. Based on seasonal flu, the CDC estimates people shed for seven days, from the day before they get sick until their fever resolves.

80 percent: People hospitalized with swine flu in the U.S. who were younger than 50 at the time, most between 5 and 24

The symptoms are almost indistinguishable from seasonal flu, except that it sickens mostly teens and young adults instead of just children and the elderly. Expect the typical fun stuff: fever, body aches, runny nose, fatigue, sore throat. Novel H1N1 can also cause diarrhea and vomiting. If you’re sick, the CDC recommends quarantining yourself for a week: no work, no school, not even a trip to the grocery store. If you have to leave the house, wear a mask. Stock up on over-the-counter flu medicine, minimize contact with family, guzzle fluids, and wash your hands for at least 15 seconds after coughing or sneezing.

2. Thwart Mutations
Although novel H1N1 virus isn’t very deadly now, it’s impossible to tell how it will evolve. Mutations in a viral gene that codes for the protein PB2, for example, could increase the virus’s ability to replicate and cause more serious illness; that kind of mutation was one of the signatures of the 1918 flu that killed 50 million people. The first hint that such a mutation has occurred might be a big spike in death rates—and that could be too late. The best way to prevent mutations is to control the spread of the epidemic: The fewer people flu infects, the less it evolves.

3. Track Infections
The World Health Organization (WHO) announced in July that this strain of H1N1 is the most rapidly spreading pandemic in history. (Nearly every influenza virus detected in the U.S. last summer was novel H1N1.) And since it’s already spread around the globe, the CDC is no longer asking doctors to send swabs from every patient to agency labs for testing. The WHO is relying on people to look for “unexpected, unusual or notable changes in patterns of transmission,” like sudden high absenteeism rates at schools or workplaces, or surges in ER visits, and report the events to local agencies. But not having widespread individual testing will make it much harder for researchers to detect new genetic mutations that allow the virus to spread more quickly or evade vaccines as they arise.

4. Medicate Judiciously
Swine flu continues to be sensitive to the antiviral drugs oseltamivir (Tamiflu) and zanamivir (Relenza). The CDC recommends providing the drugs to those who need it most, like health-care workers and children, but to limit its availability to the general population because the more people who use the drug, the more chances the flu has to develop resistance to it. Tamiflu became virtually useless against the dominant seasonal flu strain in just a year. The other side of the coin: Health-care workers may stop taking antivirals because of the side effects (nausea and vomiting), allowing the infection to spread rapidly throughout hospitals and clinics.

Q. Flu is so common. Why the stink over swine flu?
A. Seasonal flu tends to be genetically similar from year to year, which means that over time, people develop some immunity to it. Novel H1N1, however, is genetically unique; its genes call for proteins with different amino-acid configurations than standard flu. So most of us don’t have immunity to it. Strangely, some people over 60 have antibodies against the virus, perhaps because they encountered something similar when they were young.

Q. Why does flu spread faster in the winter?
A. A study published in the Proceedings of the National Academy of Sciences in February showed that the flu virus spreads much better in the drier air and cooler temperatures of winter.

Q. Should I wear a facemask?
A. The CDC only recommends facemasks for anyone at risk of serious illness who is traveling in crowded places or taking care of a sick person, and for anyone already infected who is going out in public.

Q. Should we stop traveling?
A. If you’re sick, absolutely. But even if we reduced total human mobility by 60 percent, says mathematician Dirk Brockmann of Northwestern University, we would slow the virus only slightly.