The complexity of the brain makes it one of the most fascinating and sophisticated pieces of biology that we know... 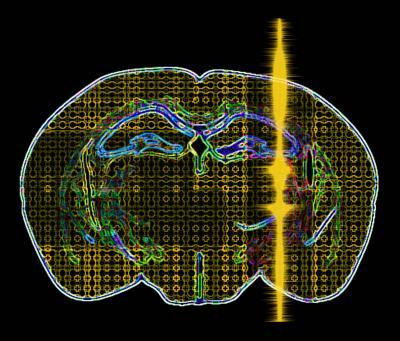 The complexity of the brain makes it one of the most fascinating and sophisticated pieces of biology that we know of. But when things start to go sideways up there, modern medicine is often calls for treatments like surgery or shock stimulation, practices that can result in even more damage to fragile brain tissues. But a new method of noninvasive brain stimulation could diagnose and treat an array of neurological ailments using nothing but pulses of harmless ultrasound.

Using super-sensitive ultrasound, a team or researchers at Arizona State University was able to elicit motor responses from an anesthetized mouse. The team knew from prior research that stimulating action potentials in brain tissue with ultrasound was possible in dishes containing brain tissue samples. But the ability to accomplish such a feat through layers of skin and bone and generate results in an intact, living brain brings ultrasound into the realm of realistic treatment options.

The researchers envision ultrasound pulses manipulating brain function to help doctors diagnose brain problems and even treat certain dysfunctions. But more than that, the tam found that ultrasound can modify some cognitive abilities, like memory formation. Their study found that ultrasound stimulates productions of brain-derived neurotrophic factor (BDNF) in the hippocampus, which could help medical personnel increase brain plasticity and even treat certain disorders like PTSD.

Taken as a whole, ultrasound’s ability to both stimulate motor function and manipulate certain cognitive qualities could lead to noninvasive treatments for some neurological ailments for which there is no cure, like Alzheimer’s. And if treating brain dysfunctions doesn’t necessarily pique your interest in ultrasound, consider this: The breakthrough could also lead to the development of future brain-machine interfaces that could be applied to everything from communication to entertainment. To quote William “Jamie” Tyler, the ASU neuroscientist helming the study:

“Maybe the next generation of social entertainment networks will involve downloading customized information or experiences from personalized computer clouds while encoding them into the brain using ultrasound. I see no reason to rule out that possibility.”

How’s that for future applications? Obviously there’s a long way to go before we turn a twitching mouse into the brain-beaming communications interface of the future, but it’s a promising start.