Harvesting the bounty of the earth is harder than it looks, especially you’re over 65 years old — as two-thirds... 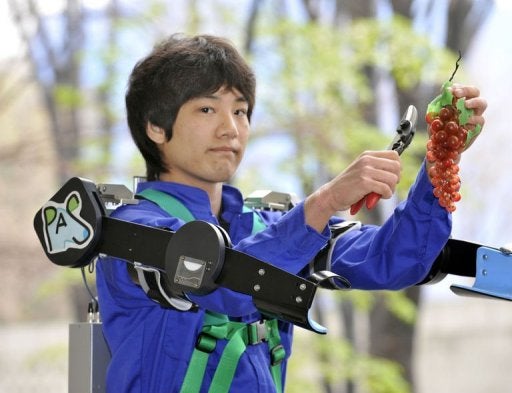 Harvesting the bounty of the earth is harder than it looks, especially you’re over 65 years old — as two-thirds of Japan’s farmers are. For those whose joints ache more with every radish pulled out of the ground, Shigeki Toyama, a professor at Tokyo Agriculture and Technology (TAT) University, has developed a motorized exoskeleton designed to boost the wearer’s strength by 62 percent.

The robotic suit uses movement-detecting sensors, voice recognition, and eight electric motors to straighten the farmers’ postures and ease the pressure on their joints. Rods automatically straighten the wearer’s legs when they are under too much strain, and muscular activity caused by bending the knees and crouching is reduced by half.

After fifteen years in development, the suit is slated to go into production by the end of this year. The preliminary models come in two sizes: a 72-pound frame, which aids heavy lifting, and a 50-pound version for those performing lighter tasks.

Sadly, those of us living in the Western Hemisphere need not envision robo-farmers gathering in nearby fields, as Toyama does not intend to export his invention to our shores.

“I doubt that the suit would sell in Europe and in America, where foreign migrants workers often perform farm-related tasks,” he said.

Although the suits have yet to go commercial, Toyama already has big dreams about an upgraded version of the original. By the end of the year, he plans to add augmented reality goggles that tell farmers about the ripeness of grapes, their heart rate, and their calorie consumption.