The Undersea Hunt for Intraterrestrial Life 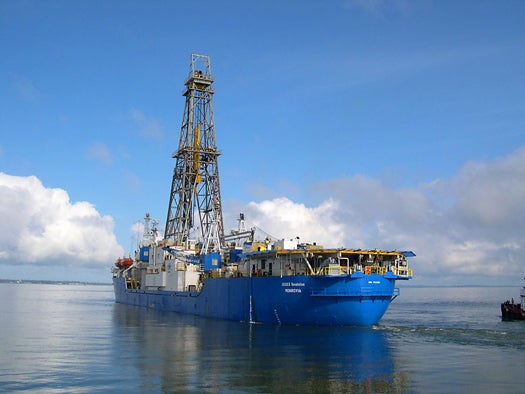 Despite the impact of mankind, the size of trees, and the sheer numbers of bugs, multicellular terrestrial life only makes up a small portion of the planet’s biomass. The majority of life on Earth lives at the bottom of the ocean, much of it beneath the ocean floor.

Thanks to those extreme depths, science knows virtually nothing about the majority of the planet’s lifeforms. But a series of deep sea drilling expeditions over the course of the next year looks to finally shine a light on our planet’s richest, and most mysterious, habitats.

In 2010, the JOIDES Resolution, a deep sea drilling vessel operated by the international research consortium Integrated Ocean Drilling Program, will make three trips to various ocean ridges in search of never before discovered forms of life. The JOIDES Resolution will collect microbe-rich samples from deep below the surface, and flush dyed liquid through undersea aquifers to reveal how the deep ocean flows.

The voyages will also set up six undersea observatories to monitor microbiological content throughout the ocean. The observatories will be linked to surface laboratories, and cross referenced against the data obtained from the drilling.

Between the drilling and the observatories, on researcher told McClatchy newspapers that he expects a “fire hose of data.”

These expeditions also have important implications in the search for extraterrestrial life. The conditions beneath the ocean floor closely resemble similar locations on Mars and Jupiter’s moons. If humans are going to find alien life, it will most likely come in a form similar to the ones the JOIDES Resolution expedition hopes to retrieve.

And by gaining a better understanding of Earth’s deep-dwelling microbes, scientists hope to be better prepared in the search for subterranean organisms on other worlds.