China, constantly straddling the line between super-polluter and clean tech pioneer, has unveiled what for the time being is the... 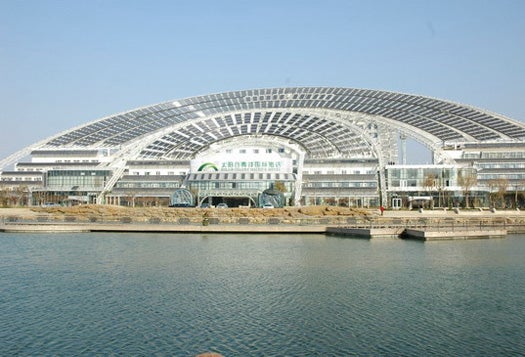 China, constantly straddling the line between super-polluter and clean tech pioneer, has unveiled what for the time being is the world’s largest solar-powered office building . The fan-like roof of the 800,000 square-foot facility located in Dezhou in Shangdong Province was cleverly designed to resemble an ancient sun dial, though rather than ticking off the passing hours, the building houses exhibition centers, research facilities, meeting and convention spaces and a hotel, all of which are powered by the hundreds of solar panels adorning its roof.

A lack of fossil fuel burning indeed makes the building decidedly green, but it’s architecture hides several other energy- and resource-saving innovations like advanced wall insulation and roofing that help trim 30% its energy consumption compared to the national average. And while massive, the external structure actually uses 1% of the steel that the People’s Republic poured into the Bird’s Nest for the 2008 Summer Olympic Games.

Of course, it would be folly to think that China will hold the title of “world’s largest solar powered building” for long with Abu Dhabi just getting underway on its much-ballyhooed Masdar City in February. The centerpiece of the $22 billion development–the world’s first sustainable city–will be a 1.4 million square-foot solar building that is energy positive; that is, it will actually produce more power than it needs.

That’s all assuming, of course, Abu Dhabi doesn’t go broke in the meantime. Masdar City won’t be complete until 2016, but Masdar’s solar HQ is part of phase one of the process and should be complete by the end of next year.