In 2020, Take a High-Speed Train from Beijing to London

Chinese rail passengers already zip between cities on trains traveling three times faster than the average train in the States,... 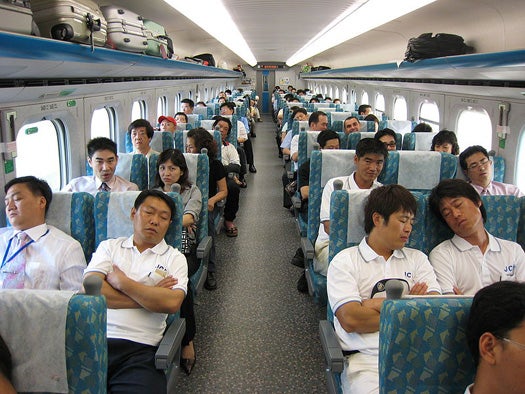 Chinese rail passengers already zip between cities on trains traveling three times faster than the average train in the States, and a 217-mph line linking Wuhan and Guangzhou will soon be the fastest train on Earth. But not content with screaming-fast trains linking cities within its borders, China now plans to extend its high-speed network all the way to London with a rail line that will fly through 17 countries at speeds reaching 200 miles per hour.

The project calls for the construction of three lines, hopefully by 2020: the first will link London’s King’s Cross Station to Beijing and take approximately two days to traverse the entire stretch (it will then continue on down to Singapore). A second line will connect China with Southeast Asian nations like Vietnam, Thailand and Malaysia. The third line will link Germany and Russia, crossing Siberia to terminate, of course, in China.

How is China getting 17 nations on board with such an ambitious — and expensive — project? For starters, they’re offering to pick up the tab. China will build the infrastructure in exchange for rights to natural resources in the nations that benefit from the high-speed links. So China gets timber, minerals, oil, gas, etc. as well as a fast, efficient means to pipe them to cities within its borders, and smaller, sometimes isolated nations (here’s looking at you, Burma) get a high tech, high speed connection to the greater global economy.

Meanwhile, in the U.S. we can’t get federal, state and local bureaucracies to agree on funding for a much slower link between Chicago and St. Louis, and San Francisco to L.A. in less than three hours feels like a distant dream. Sigh.