Hydrogen is the most abundant element in the universe, but it can be difficult and costly to get at the... 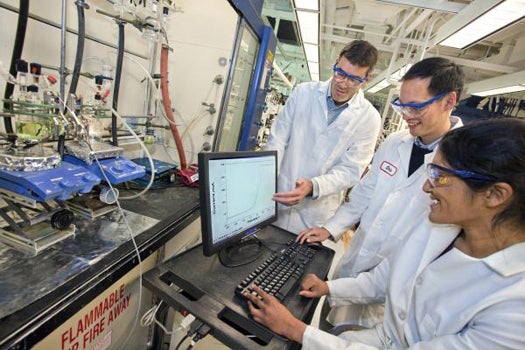 Hydrogen is the most abundant element in the universe, but it can be difficult and costly to get at the raw gaseous stuff, at least in the kind of commercial volumes that could sustainably fuel a hydrogen economy. But researchers at the DOE’s Lawrence Berkeley National Laboratory have made a substantial leap toward a hydrogen-based future by devising a cheap, metal catalyst that can split hydrogen gas from water.

The ability to pull apart H2O molecules into their constituent atoms is, of course, the key to creating a hydrogen-based energy economy. If we can do so in a cheap and energy efficient manner, we could potentially turn Earth’s vast supply of water into our own vast supply of cheap, clean power.

But most hydrogen gas on earth comes packaged as natural gas — a carbon-based fuel — or packed into water, which can be split into oxygen and hydrogen through a process called electrolysis. Electrolysis requires a good deal of electricity, but if renewable fuels generate that power the process can be carbon neutral. What it can’t be is cheap; electrolysis requires a catalyst to split water into oxygen and hydrogen gas, the most common of which is platinum, which retails at some $2,000 per ounce.

Seeking to drive the cost of electrolysis down to more reasonable levels, the Berkeley Lab team devised a high-valence metal they’re calling Mo-oxo for molybdenum-oxo (PY5Me2, for you chem. geeks out there). The catalyst requires no additional organic additives or solvents, can operate in neutral water (even if it’s dirty) and works with sea water — meaning we could literally be looking at oceans of cheap energy. Best of all: Mo-oxo is about 70 times cheaper than platinum.

Don’t expect to see Mo-oxo splitting seawater into large volumes of hydrogen gas right away. The research is still preliminary and the Berkeley team is just getting into some of the more exciting chemistry. They’re looking for additional similar metals that might generate hydrogen gas at even higher efficiency, so by the time this kind of tech is commercialized we may have found an even better catalyst. In the meantime, Mo-oxo marks a sort of corner-turning for water electrolysis. Any great shift to non-carbon fuels is ultimately going to be driven by economics, and finding less expensive ways to generate hydrogen gas is integral to kicking off that sea change.