A Switzerland-based chemist who invented solar cells that mimic photosynthesis is the winner of a million-dollar technology prize announced Wednesday.... 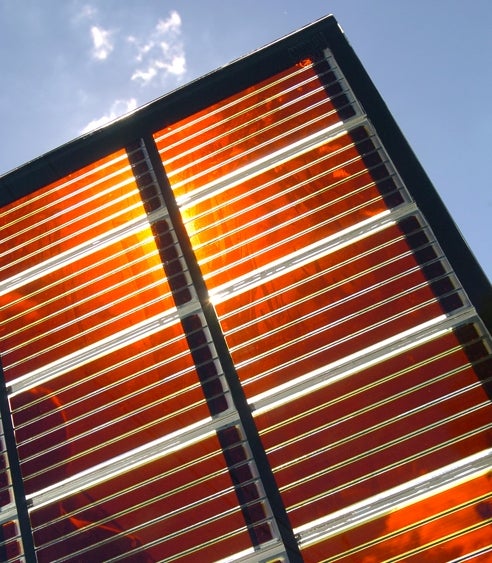 A Switzerland-based chemist who invented solar cells that mimic photosynthesis is the winner of a million-dollar technology prize announced Wednesday.

Michael Gratzel invented low-cost solar cells that can be turned into electricity-generating windows, mobile solar panels and other devices. He won the $960,000 (€800,000) Millennium Technology Prize, awarded every other year by Finland’s Technology Academy.

The cells use nanocrystal films to produce power from sunlight, the BBC reports. The particles are so small that they don’t scatter light, and can collect solar energy from all sides. The cells are fairly cheap to make — they use dye squeezed from berries, for instance — which the Finnish academy said could be a breakthrough for solar energy.

Gratzel, who was born in Germany and now directs the photonics and interfaces laboratory at Ecole Polytechnique de Lausanne, in Lausanne, Switzerland, told BBC that natural photosynthesis was his inspiration.

The cells have already been used in consumer products, including as battery-charging backpacks. Gratzel suggests making windows from them — “You could think that the glass of all high-rises in New York would be electricity-generating panels,” he said.

He said he would invest his winnings in further research.

Three shortlisted entries were all vying for the world’s biggest technology prize. The others were Sir Richard Friend of the University of Cambridge, who invented the OLED, and Stephen Furber of Manchester University, the principal designer of the ARM 32-bit RISC microprocessor, which is used in gadgets from iPhones to Zunes. Friend and Furber each won $179,775 (€150,000).