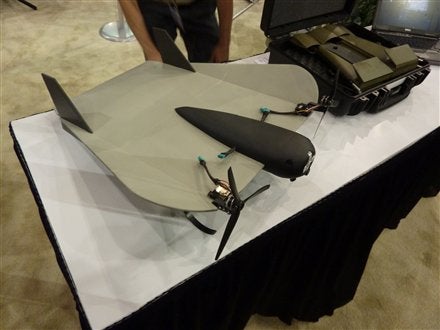 Drones powered by solar energy offer the promise of staying in the air for years on end, but DARPA scientists also want an option for the nighttime. Now the Pentagon agency has awarded a contract to Aurora Flight Sciences to build a micro air vehicle that can harvest both sunlight and thermal energy, Ares Defense Blog reports.

Aurora will focus its work on the agile flying-wing drone platform called the Skate, which can unfold from a backpack and launch like a boomerang to navigate streets and inside buildings.

About 95 percent of the Skate’s 40-watt power requirement would come from sunlight, with the remaining 5 percent coming from thermal energy. If the design seems doable during the six-month Phase 1 study, Aurora might get a Phase 2 contract to build the new drone — and the company might even squeeze in a bat sonar-inspired navigation system.

Aurora has previously worked on the vertical-takeoff Excalibur drone that could pack four Hellfire missiles, as well as the giant Odysseus solar plane that competed for a DARPA contract. But the Skate is one of the more far-out concepts we’ve seen so far.