US General Demands Robot Army, Counts 122 Lives That Bots Could Have Saved

Like most Army commanders, Lt. General Rick Lynch says that he needed more troops in Iraq, and that they would... 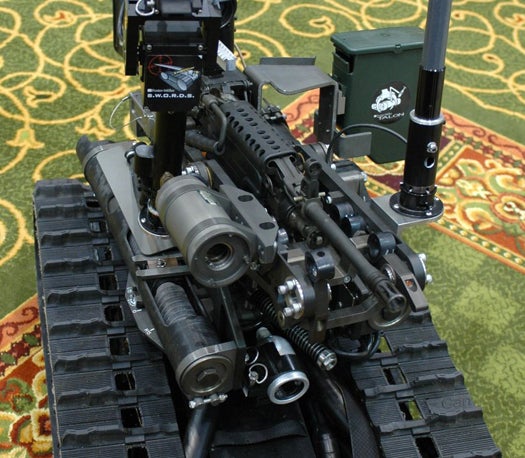 Like most Army commanders, Lt. General Rick Lynch says that he needed more troops in Iraq, and that they would have saved the lives of men lost under his command. Unlike most commanders though, Lynch isn’t demanding flesh and blood soldiers, but steel and rubber robotic infantrymen.

Speaking at the Association for Unmanned Vehicle Systems International conference, Lynch said that robot systems already in place could have saved 122 of the 155 men who died during his time in Iraq.

Lynch’s concerns hold particular weight, as he has both the combat experience of leading the Army’s Third Infantry Division in Iraq, and the academic experience of earning a Master’s Degree in robotics from MIT.

Echoing similar statements he made in August, Lynch claims that deploying remotely, or autonomously, navigated ground vehicles could have lowered casualties as a result of IEDs, and that robotic infantry could have replaced humans on dangerous surveillance missions.

Some robot infantry had been deployed to Iraq, specifically the SWORD gun platform, but the Army severely restricted their use over safety concerns.

Lynch went even farther than most in his talk, demanding the implementation of autonomous, armed robot systems. He countered other Army critics, saying that he believed the current level of technology was advanced enough to overcome problems with autonomous robots shooting the wrong people.

“There’s a resistance saying that armed ground robots are not ready for the battlefield. I’m not of that camp,” Lynch said.