In 2008, the International Association of Athletics Federations (IAAF) banned double amputee Oscar Pistorius from racing in the 2008 Summer... 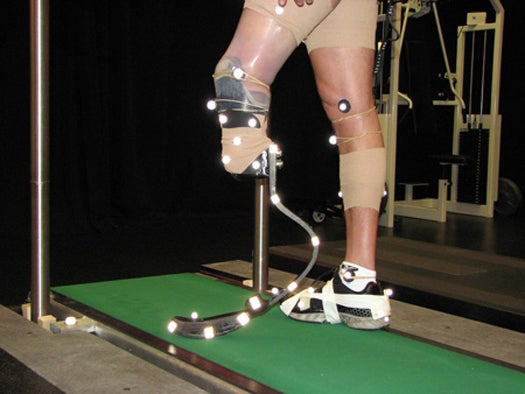 In 2008, the International Association of Athletics Federations (IAAF) banned double amputee Oscar Pistorius from racing in the 2008 Summer Olympics. Later that same year, the ban was reversed. The back and forth centered on Pistorius’ specially designed, spring-loaded, prosthetic legs. The IAAF argued that artificial legs designed especially for running gave Pistorius an unfair advantage against runners whose flesh-and-blood limbs didn’t benefit from advanced engineering and space-age materials.

While an MIT study last year eventually led to the overturn of the original IAAF decision, no one had done a systematic study of amputee racers in general. Now, the MIT researchers that investigated Pistorius have released the results of a wider trial, and it turns out that specially designed prostheses don’t actually help sprinters.

The researchers came to this conclusion by measuring the amount of force generated against the ground by these specially designed false limbs. In all the cases, the fake limbs produced less energy than a regular human leg. Hard to believe that it wouldn’t be obvious that someone with no legs couldn’t run as fast as someone with two of them.

However, this only holds true for the current generation of replacement limbs, and the MIT study doesn’t preclude a future where cyborg athletes smoke the merely human, across a range of sports.