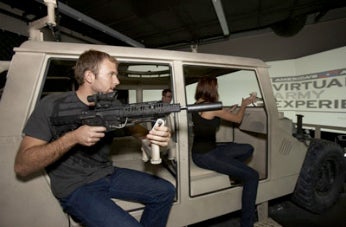 There’s playing online games, and then there’s collecting 68 virtual “husbands” in a game. That’s when Chinese parents intervene and send their wayward offspring to a boot camp staffed by soldiers of the People’s Liberation Army.

Many of the Internet addicts are young males hooked by online games such as World of Warcraft and Counterstrike. But other residents of the camp include some young women addicted to dance and virtual family video games, not to mention people suffering from addictions to work, shopping and sex. All of them adhere to a rigid routine of drills and physical exercises on a military base outside Beijing.

More than 300 such camps have sprung up in China to tackle modern “non-material” addictions. China boasts the world’s largest number of Internet users at 290 million, and subsequently finds itself coping with many addicted netizens. It may soon become the first country to classify Internet addiction as a disorder, by registering the condition with the World Health Organization.

The Christian Science Monitor reports that treatment is ongoing for the 60 or so patients at the boot camp. They attend counseling with their parents, engage in confidence-building activities and sex education, with about 60 percent also going on medication. This multi-pronged approach seems to recognize that someone engaged in weeklong gaming marathons may suffer from more than just an unhealthy fascination with pretty pixels.

On the other side of the world, the U.S. Army is testing new recruitment centers stocked with first-person shooter games and full-size simulators of an Apache Longbow helicopter, a Black Hawk helicopter, and an armed Humvee (M4 carbine assault rifles included). The goal: use video games to connect with young people in the hard-sell urban centers, according to the New York Times.

These hardly represent new tactics, given that the U.S. military has successfully used games such as America’s Army in the past. But the recruitment center has apparently only met with mixed success.
Meanwhile, the Chinese boot camp reportedly involves team-building exercises such as using mock AK-47 assault rifles for laser tag. And the Christian Science Monitor quotes one boot camp resident saying “I feel like we’re brothers, sharing this different life together . . . sometimes I don’t want to leave.”

Huh. It almost sounds like the treatment may work better than the lure, when it comes to video game addiction and getting a taste for military life. Or at least, the U.S. Army may not want to swap out boot camp for simulators just yet.