Heat Can Travel Only One Way Through New Japanese Diode 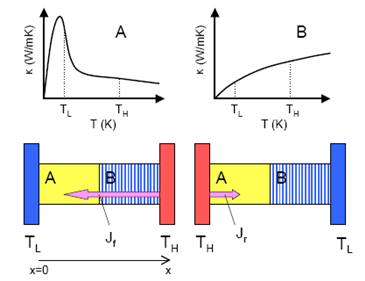 Japanese researchers have developed a new diode that only transmits heat currents in one direction, and they think it could represent a new future for thermal computing.

Similar work has succeeded with individual electrons in superconductors and in lone nanotubes, according to Technology Review. But this represents the first time anyone has managed the trick in a bulk solid, which in this case consists of two types of perovskite cobalt oxides.

Researchers have long theorized that such diodes, or thermal rectifiers, could become possible with the right material. Such a material would have to have high thermal conductivity at low temperatures and vice versa, so that that heat would flow continuously in one direction — and then researchers could combine the material with another having the opposite characteristic.

Such a device has clear use in creating heat sinks that keep microchips running cool. Yet Wataru Kobayashi at Waseda University and his colleagues have put forth a more ambitious goal: controlling heat currents to create a new type of information processing with thermal transistors, thermal logic gates, and thermal memory.