A Portable Device for Frying Electronics

An enemy missile has no strategic value if its computer is down. A high-power-microwave emitter can disable a missile’s electronics... 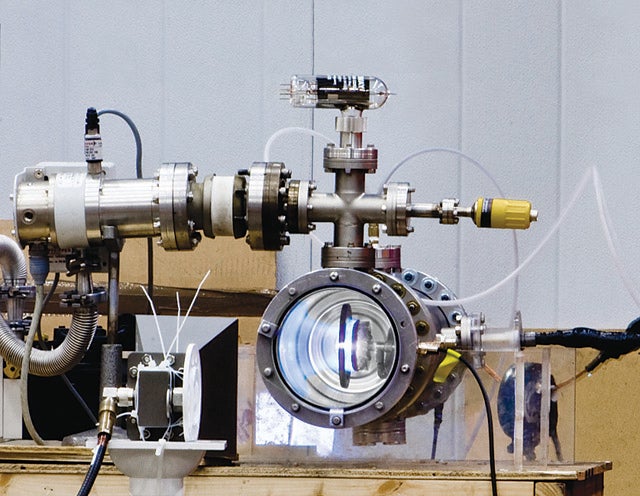 This high-power microwave bomb, pictured in a laboratory at Texas Tech University, can safely disable enemy electronic devices in the battlefield without harming human lives.
SHARE

An enemy missile has no strategic value if its computer is down. A high-power-microwave emitter can disable a missile’s electronics on the launchpad, leaving bystanders unharmed — and now Texas Tech University engineers have a plan to scale down the truck-size tech.

To make strong microwaves, you need a lot of electricity, usually from a bulky generator. Instead the team packed small explosives into a five-foot-long, six-inch-wide tube. The detonation produces a burst of electrons, which power a microwave tube—similiar to the type in a microwave oven—that radiates microwaves. An antenna zaps those at a target, where they can cause a circuit-frying current surge in electronics. The explosion destroys the device, and although the U.S. Army funded the work for “educational purposes,” it doesn’t take much imagination to think of uses for a one-shot, missile-shaped electronics buster,says James Benford, a high-power-microwave expert at Microwave Sciences in California.

This spring, the Texas Tech team proved the device by firing a 100-megawatt microwave signal to an antenna 30 feet away. They are now working to pack it into a three-foot-long tube.