Robotic Balloon Cranes Could Turn Any Shore Into a Seaport

The future of seaports could be not having any seaports at all. At least that’s the vision of Jeremy Wiley,... 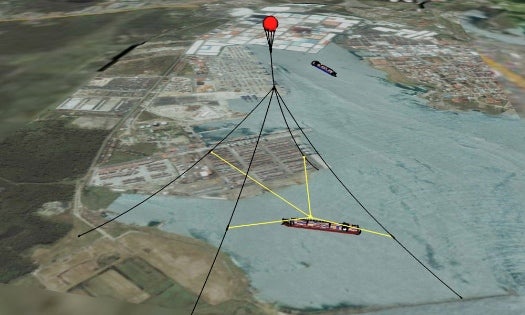 The future of seaports could be not having any seaports at all. At least that’s the vision of Jeremy Wiley, founder of Tethered Air. Wiley envisions a system of robot cranes tethered to huge heavy-lifting balloons that could deployed anywhere to ferry shipping containers or other heavy cargo from ship to shore, or vice versa. Such systems would be relatively inexpensive, he says, and could create a near-instant seaport just about anywhere water meets the land.

From a technical standpoint, Wiley’s idea is somewhat similar to the Skycam that zooms around overhead at NFL football games. Four anchor cables suspended from a lifting balloon connect with four payload cables that actually connect to the cargo. Those anchor cables reach from the balloon to the ground, and through the controlled shortening and lengthening of all of these cables by robotic mechanisms, the balloon and the payload can be moved around the space inside the four anchor cables.

Wiley dreamed up the idea as a U.S. Marine in Kuwait helping to move cargo from ship to shore prior to the invasion of Iraq. The military has long struggled with the logistics of moving all the men and materiel necessary to make war in a timely and efficient manner, and he started to see potential in a better way to quickly deploy a robotic crane. Likewise, in humanitarian crisis situations like the 2010 Haiti earthquake, moving cargo quickly into areas that have possibly been devastated (or developing areas that never had good deep water ports to begin with) can be the difference between life and death.

Using a robotic balloon lift, you could have a heavy-lift seaport crane in place in a matter of hours just about anywhere. It could be used in places where shipping tends to bottleneck–like at the Panama Canal–without creating anymore costly permanent infrastructure. And, at an estimated $7-10 million for a robo-balloon-crane big enough to lift shipping containers from ship to shore and back, a working Tethered Air crane or something like it might just be a steal of a deal. That’s dirt cheap next to the cost of building an actual seaport, and for coastal cities that otherwise could never even dream about building a deep water port facility, it could quickly pay for itself. Much more at LiveScience.