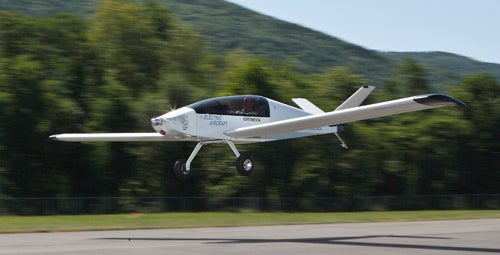 The builder says his goal was a noiseless plane that would fly as smoothly as a magic carpet.

In August, at the Experimental Aircraft Association (EAA) AirVenture show in Oshkosh, Wisconsin, Randall Fishman’s ElectraFlyer-C made a virtually silent pass over the audience at a mere 200 feet. What they were seeing (but not hearing) might be the world’s first fully electric-powered airplane—representing, said one EAA official, “a groundbreaking technology that would be aviation’s first true alternative to a fossil-fuel engine.”

Fishman, a retired jeweler from New Jersey, has been flying planes and gliders for 30 years. In the mid-1990s, he put together a motorized glider kit, but it was noisy and undependable. It sat in storage until two years ago, when he replaced its gas engine with an 18-horsepower electric motor he and a colleague designed to minimize noise and vibration. He then raised the plane body eight inches off the ground to accommodate a 45-inch propeller, increasing the prop’s thrust by more than half. He also designed battery packs to hold two 75-volt lithium-ion-polymer batteries, which can juice up in midair and propel the plane at 70 miles an hour for 90 minutes on a single charge.

Now Fishman is taking his creation to the public. He sells kits on his Web site (electraflyer.com) that include the batteries and electrical propulsion components. By mid-2010, he plans to offer ready-to-fly electric two-seat planes.

Turn the page to see how the flyer works. 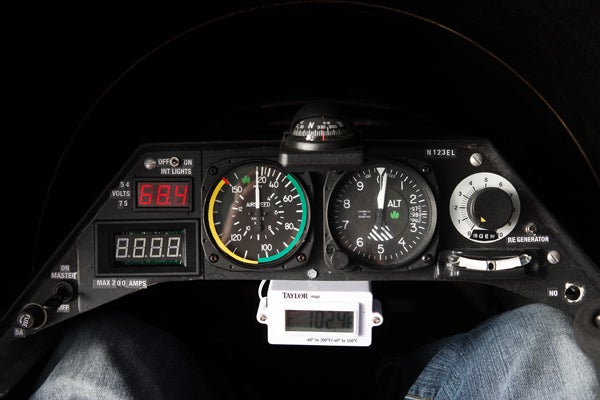 The pilot’s view of the cockpit controls.

Motor Controller Located behind the propeller (along with the motor and one of the battery packs), the computerized controller loses only 2 percent of the energy that passes through it from the batteries to the motor, contributing to an overall efficiency of 88 percent (a comparable two-stroke gas engine operates with about 15 percent efficiency).

Regenerative Motor Flipping a switch in the cockpit turns the propeller into a wind-powered generator, converting its motion into electricity. While cruising, the propeller spins up to 2,400 rpm, charging the lithium-ion-polymer batteries mid-flight.

Digital Gauges The voltmeter tracks how much juice is left. (Fishman suggests landing if you get down to 60 volts.) Underneath that, the ammeter shows how fast the battery is being sapped. In regenerative mode, a minus sign indicates that the propeller is pumping energy back in. 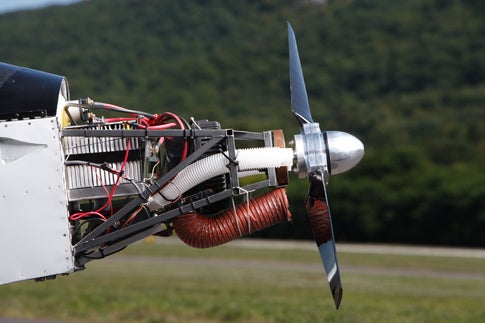 Propeller Fishman’s original propeller revved between 5,000 and 6,000 rpm, making a terrible racket. The larger (45-inch) direct-drive prop spins at 3,100 rpm at full power and goes easy on the ears.

Battery Packs For safety, the batteries are surrounded by fireproof ceramic and a thin layer of stainless steel. It takes six hours to charge the pack and costs Fishman just 70 cents on his electric bill. 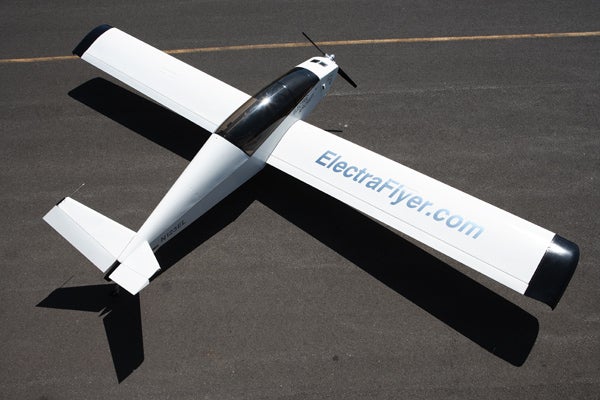