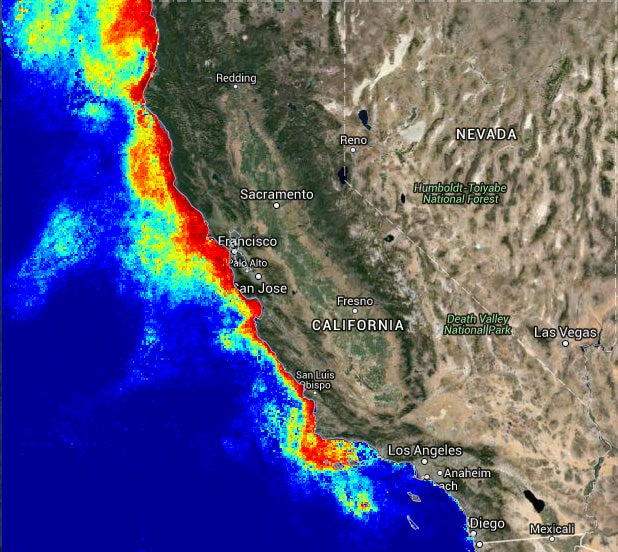 An individual alga is a very small thing, but when it gets together with its buddies to form a massive algae bloom, those little organisms can become a big problem.

In research presented today at the American Geophysical Union’s (AGU) Fall Meeting, Raphael Kudela of the University of California, Santa Cruz, announced that unusual conditions in the Pacific Ocean caused the surprising and incredibly toxic algal bloom along the West Coast this summer.

A strange area of warm water in the Pacific, known as the Blob, combined with the nutrient-rich waters on the Pacific coast created the perfect conditions for an algal bloom, a phenomenon seen more often in warmer waters, like the Persian Gulf or areas with a lot of nutrient runoff, such as Lake Erie. California does have algal blooms, but they are usually small and only occur for very short periods of time.

This year’s algal bloom was a huge problem, though, as these particular algae, of the Pseudo-nitzschia genus, tend to produce a deadly neurotoxin called domoic acid that builds up in nearby sediments and sea life.

“The duration of the bloom and the intensity of the toxicity were unprecedented, and that led to record levels of the toxin in species such as anchovies, razor clams, and crabs,” Kudela said. “We also saw the toxin in organisms and parts of organisms where we thought it was not supposed to be, like the filets of fish.”

Regulations and food monitoring in the United States prevented the algal bloom from becoming a public heath problem this summer, but health departments have issued warnings asking consumers not to eat Dungeness crab, which was found to have unusually high levels of domoic acid. Crab season, as a result, has been postponed in some areas, and health departments in some parts of Washington have asked people not to go clamming until the toxin returns to safe levels.

But it wasn’t just the seafood industry that was affected. In a study published in Science this week, researchers found that sea lions that were exposed to the toxin suffered brain damage, leading to memory issues. As a result, an increased number of sea lions have been seen stranded along beaches or have ventured far from their typical hunting territory.

Unfortunately, the fishing industry (and the sea lions) might be in for more trouble ahead.

“The predictions are for this El Niño to be as strong as the one in 1997-98, when the warm water lasted through 1998. So we could be looking at a big bloom again next year,” Kudela said.