How California is predicting and preparing for the inevitable. 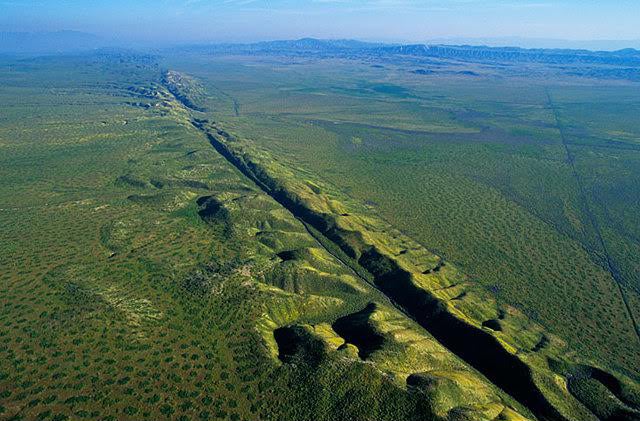 There’s a crack in California. It stretches for 800 miles, from the Salton Sea in the south, to Cape Mendocino in the north. It runs through vineyards and subway stations, power lines and water mains. Millions live and work alongside the crack, many passing over it (966 roads cross the line) every day. For most, it warrants hardly a thought. Yet in an instant, that crack, the San Andreas fault line, could ruin lives and cripple the national economy.

In one scenario produced by the United States Geological Survey, researchers found that a big quake along the San Andreas could kill 1,800 people, injure 55,000 and wreak $200 million in damage. It could take years, nearly a decade, for California to recover.

On the bright side, during the process of building and maintaining all that infrastructure that crosses the fault, geologists have gotten an up-close and personal look at it over the past several decades, contributing to a growing and extensive body of work. While the future remains uncertain (no one can predict when an earthquake will strike) people living near the fault are better prepared than they have ever been before.

The Trouble With Faults

All of the land on Earth, including the ocean floors, is divided into relatively thin, brittle segments of rock that float on top of a much thicker layer of softer rock called the mantle. The largest of these segments are called tectonic plates, and roughly correspond with the continents and subcontinents of the earth.

The San Andreas fault is a boundary between two of these tectonic plates. In California, along the fault, the two plates–the Pacific plate and the North American plate–are rubbing past each other, like you might slip by someone in a crowded room. The Pacific plate is moving generally northwest, headed towards Alaska and Japan, while the North American plate heads southwest.

In a simplified, ideal world, this movement would happen easily and smoothly. Because it covers such a large area, not all of the fault moves at the same time. In the middle, things are moving rather smoothly, with part of the Pacific plate gliding by the North American plate with relative ease, a segment that scientists say is ‘creeping’.

It’s at the northern and southern extremes where things get tricky. The real problems begin when the plates get stuck, or wedged together.

Visions Of A Disaster

The fear of a huge earthquake from the San Andreas devastating the west coast has been rich fodder for disaster films, including Superman and, more recently, San Andreas. The good news is that the worst-case scenarios in those films are completely impossible. California will not sink into the sea, and even the largest possible earthquake is short of anything that the Rock had to wrestle with.

But disasters have happened.

In 1906, the northern segment of the fault, near the city of San Francisco, ruptured along nearly 300 miles, causing a huge earthquake that led to fires, downed buildings, and thousands of casualties. The death toll was between 700 and 2,800.

Meanwhile, other segments of the fault, like one south of Los Angeles that hasn’t seen a large earthquake since 1690, are considered stalled. Centuries of energy are built up and ready to be released. When? Nobody knows.

Recent analyses suggest that in a worst-case scenario, the San Andreas would beget an earthquake ranking an 8.3 on the Richter scale, a logarithmic scale on which a 6.0 is ten times as powerful as a 5.0, a 7.0 ten times as powerful as a 6.0, and so forth. To put that in context, earthquakes under 2.5 are rarely felt. Earthquakes under 6.0 can cause some damage to buildings, but aren’t major events. Above that level things start to get interesting. The largest recorded quake in the United States was a 9.2 earthquake that hit Alaska in 1964.

“That would require the San Andreas to rupture wall to wall from its southern extremis to up to Cape Mendocino,” says Tom Jordan, the director of the Southern California Earthquake Center at The University of Southern California,. He explains that the creeping segment in the middle acts as a buffer, making the 8.3-magnitude earthquake much less plausible than some other options.

Even if the 8.3 earthquake never materializes, scientists worry that a rupture along the long-inactive southern segment could be devastating, compounded by the large population in the area. The 1989 Loma Prieta earthquake that shook San Francisco was only a 6.9, but it caused billions of dollars in damage injured over 3,000 people, and killed 63.

“The San Andreas lies close to the coastline where people live,” Jordan says. The valleys along the coast that proved so enticing to the settlers who founded cities like Los Angeles are large areas of sedimentary rock that could be hugely problematic in an earthquake.

“Even though L.A. is 30 miles from the San Andreas, it can still get very strong ground motion,” Jordan says. “The sediments shake like bowls of jelly.”

But even just a medium-bad scenario could be enough to kill hundreds and ruin the economy.

Researchers like Jordan are building up huge, incredibly detailed 3D maps of the geology near the San Andreas fault. These maps can be used to generate detailed assessments for almost any possible earthquake scenario that might happen along the fault.

In 2008, United States Geological Survey scientist Lucy Jones and colleagues published the ShakeOut scenario, a detailed report that looked at what could happen if a large (magnitude 7.8) earthquake occurred along the southern leg of the fault.

Just like the 1906 earthquake in San Francisco, people living in the area would be without power and water for interminable lengths of time, and in the immediate aftermath, firefighters would not have access to water to fight the fires that would spring up in the wake of the disaster. And in California’s current drought, the fires after the earthquake could prove more devastating than the shaking itself.

Scientists may not be able to predict where and when a strike will hit, but the more they understand what could happen, the more they can help plan for any event. Last winter, Los Angeles Mayor Eric Garcetti announced a plan called Resilience By Design, that tries to address the huge risk facing the city if there was an earthquake along the San Andreas.

“It is highly unlikely we’ll make a century [without a large earthquake]” said Jones, who also headed up the Resilience by Design group. Reinforcing the city’s lifelines, like roads and utilities, is a huge priority.

Fortunately, California has a precedent to the north.

In 2002, the Denali fault in Alaska slipped and caused an earthquake with a magnitude of 7.9, the largest inland earthquake recorded in the country in 150 years. And running right across that fault was the Trans-Alaska Pipeline, an 800-mile long piece of infrastructure that carries 550,000 barrels of crude across near-pristine tundra every day.

“It was the biggest ecological disaster that never happened.” Jones said.

The pipeline was built to accommodate the movement of the earth, so that even though the earth slid by up to 18 feet in the 2002 earthquake, the pipeline didn’t break, averting a serious oil spill. To avoid rupturing, the engineers designed the above-ground portion of the pipeline in an intentional zig-zag pattern instead of a straight line, giving the pipeline flexibility. The pipeline itself can also slide. Instead of being anchored in the permafrost, part of the pipeline sit on Teflon-coated ‘shoes’ which rest on huge steel beams that sit perpendicular to the pipeline. In the event of shaking, segments of the pipe can slide on the beams like train cars on rails, without breaking. 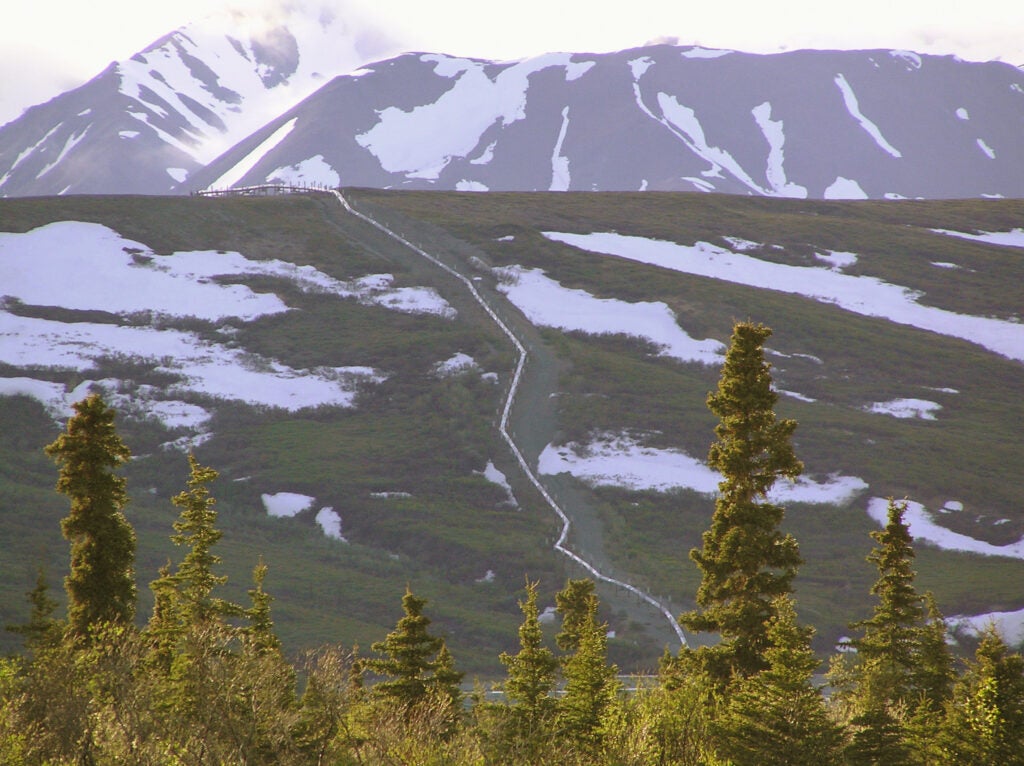 In California, water pipes and electrical lines could be built or retrofitted with similar flexibility. Researchers are even working on building earthquake-resistant houses that can slide back and forth on instead of crumbling. Unlike traditional homes, which sit on a foundation, these earthquake-resistant homes sit on sliders made out of steel, that, just like the Trans-Alaska Pipeline, can slide over the shaking ground instead of breaking.

The internet of everything has a role to play here too. In the future, networks of devices scattered across the southern California landscape could monitor an earthquake as it starts. This seismic network could send out an alert as the earthquake propagates through the earth, giving utilities precious seconds of warning to shut off valves in pipes along the fault, shut off power to prevent damage, and even send an alert to operating rooms, allowing a surgeon to remove her scalpel from a patient before the shaking even begins.

Scientists already have a seismic network in California, but more seismic sensors and technical development are needed to get the fledgling network to the next level. Unfortunately, those developments require money, and getting enough funding to build the next system has been elusive.

The cost for a truly robust alert system is estimated at $80 million for California alone, and $120 million for the whole West Coast. But funding is sparse. Earlier this year, President Obama pledged $5 million. The first sensors are already being used by San Francisco’s mass transit system to slow down trains in the event of an earthquake.

To see what the future of California might look like, one only has to glance west towards Japan, where even their fastest trains come to a halt at the first sign of an earthquake, elevators allow people to disembark, and people get warnings on radio, TV, and cell phones.

Similar techniques could be employed near Los Angeles, Jones says, making the city ready to bounce back from even the worst earthquake that the San Andreas can throw at the city.

Ralph Waldo Emerson once said that “we learn geology the morning after the earthquake.” Fortunately for Los Angeles, plenty of people, from geologists to city and emergency planners, have no intention of waiting that long.

Earthquakes in California cluster along its fault lines. Here are the epicenters of the state’s strongest 20th-century quakes. Even though truly massive quakes on the San Andreas are rare, it’s still a very active line, with many dots appearing along its length.

The animation includes all California earthquakes between January 1900 and July 2015 with magnitude 4.2 or greater. The circle size represents earthquake magnitude while color represents date, with the earliest quakes in yellow and the most recent in red. The San Andreas appears as a red line running down the left side of the state. Better seismic sensors detect weaker earthquakes, so milder quakes don’t appear in the early years of the animation.