COVID-19 could be especially bad news for the South

With limited health care access, states like Mississippi and Alabama are ill-prepared to treat infected individuals with preexisting conditions. 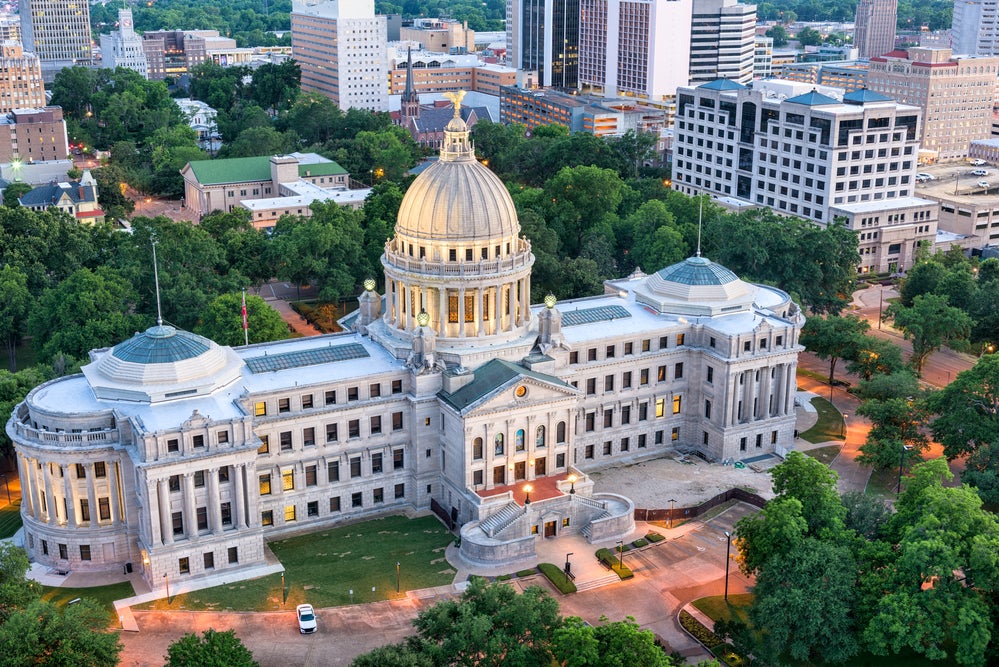 This week, Mississippi Governor Tate Reeves overrode local shelter-at-home orders, expanding the list of "essential businesses" that can remain open during the COVID-19 crisis. The state has close to 400 confirmed cases so far. Sepavone/Deposit Photos
SHARE

Laura Beil is a freelance writer based in Dallas whose work has appeared in The New York Times, Science News, ProPublica, Texas Monthly, Cosmopolitan, and other magazines. Graphics are by Aleszu Bajak. This story originally featured on Undark.

In early 2018, Bill Crawford learned that Mississippi lawmakers intended to shrink Medicaid reimbursements by 5 percent. Crawford, a longtime community leader from Meridian, worried about the wisdom of cutting funds for medical care in the throes of an influenza epidemic.

He sat down and typed out a column for the Mississippi Business Journal, describing a situation across the state that looked grim. “Mothers with sick babies on Medicaid have trouble getting timely access to providers. Clinics are backed up, hospital emergency rooms are on patient diversion, and too many children are really sick,” wrote Crawford, a Republican who once represented the state’s 83rd district in the legislature. Given the burdens of the flu, he warned, further cuts to Medicaid could cripple small town hospitals, half of which are already reported to be at the brink of failure. Next door, in Alabama, 88 percent of rural hospitals operate in the red.

“Before any of this coronavirus came along, we were facing significant challenges in the health care area,” said Crawford, who is 72 and now lives in Jackson. Today, with the relentless advance of the disease known as COVID-19, Crawford worries about his state’s vulnerability—especially given that the population is generally older, poorer, less insured, and stricken with higher rates of chronic disease than urban hubs. Mississippi, which has the lowest life expectancy in the country, is one of 14 states that have not expanded Medicaid under the Affordable Care Act.

“The attitude down here is that we don’t want government involvement in our lives,” Crawford said. “We wanted it when Katrina hit—when there’s a catastrophe. But otherwise in the general South right now, we don’t want it. We want to get rid of regulation. We don’t want to spend any money. We want to cut taxes. And that’s fine. But if you don’t tend to your essential infrastructure, you really put yourself at risk.”

While no corner of the country is likely to be untouched by COVID-19, some experts worry that the virus might leave a deadlier wake once it gathers strength in southern states. Early numbers are still low in the Deep South: Mississippi has about 250 cases and one death. Alabama has around 200 cases and no documented fatalities. Louisiana numbers are higher, at more than 1,000 infections and more than 30 deaths—though most so far are in and around New Orleans. But the mortality of coronavirus infection rises when patients have underlying health concerns.

One study in Wuhan, China, found that more than half the deaths occurred among those who had conditions such as high blood pressure, diabetes, and coronary heart disease. Another study in Italy reported that upwards of 99 percent of deaths were among people with prior medical conditions. In the US, data already suggest that rural counties, especially those in the South, bear the highest death rates from lower respiratory infections.

“The number of people who are going to be at risk is dramatically higher in the South,” says Jay Maddock, former dean of the School of Public Health at Texas A&M University who studies chronic disease patterns. Take high blood pressure. In Arkansas “41.9 percent of their adult population has hypertension, versus 24.5 percent in Utah. It’s almost double what some of the lowest states are,” he says. And while West Virginia has the country’s number one rate of diabetes, Maddock says, “Alabama, Mississippi, Arkansas and Louisiana are two, three, four and five.”

In many way, the US was fortunate that Seattle was the beachhead for the epidemic, says Jeffrey Levi of the Milken Institute School of Public Health at George Washington University. “The Seattle-King County public health department and the Washington State public health department are two of the best in the country. And so as bad as it looks, it probably would have been much worse with a weaker health department that didn’t have a host of advantages, including a large cadre of very well-trained public health workers.” In comparison to many other cities, the Seattle area is also generally younger, healthier and well insured, Levi said.

More than 2,000 miles away, a far different health ecosystem awaits. In Mississippi, about 20 percent of the population lives in poverty—twice the rate of Washington state. In 2019, Mississippi, Louisiana, Arkansas, and Alabama were ranked as the country’s least healthy states. “The less healthy the population, the more likely the epidemic is to have fatal consequences for individuals,” Levi says. “And the weaker the health system, the harder it will be to contain.”

Paul Erwin, dean the School of Public Health at the University of Alabama at Birmingham, says that the public health infrastructure in his state is solid, if underfunded, and small towns are generally coping with the same challenges as big cities. “Like all other health departments, they been severely hamstrung by the limited testing availability,” he says. For him, the bigger concern is the same thing that weighs on Bill Crawford—the physical capacity for care.

A wave of 120 hospital closures in rural America over the past decade has left many parts of the South with no nearby hospital, and many of those that remain have drastically offloaded services and staff to stay afloat. These rural hospitals have, on average, only about 50 beds, but in more isolated areas the number can be as small as 25 or fewer. And while beds devoted specifically to intensive-care—which many coronavirus patients will need—have been growing at large hospitals, they have been shrinking for small and medium facilities. More than 80 percent of the hospitals that have closed since 2014 were also located in states that did not expand Medicaid. “Not only are the rural hospitals closing,” Maddock says, “but the ones that we have are lucky if they have one ventilator. There’s a worldwide shortage of ventilators right now, but you’re not going to find them in the rural hospitals. And if you can get them, they’re very expensive.”

Many smaller hospitals cope with emergencies by stabilizing patients and sending them to larger cities with more specialized care—but once the virus reaches the countryside, urban centers are also likely to be full.

Levi, of George Washington University, also worries that many infected people in southern states may be gravely ill before they even seek care because more of the population lacks health insurance. Among the states that have not expanded Medicaid, more than half are southern. (In a line starting east of New Mexico, only Arkansas and Louisiana have taken the expansion.) After the testing shortage is overcome, people without health insurance are still likely to hesitate seeking timely care—even if they have the hallmark symptoms of infection—for fear of creating medical bills they can’t pay. So far, none of the emergency legislation addresses the cost of treatment for coronavirus; one Massachusetts woman’s bill came to $34,927.43.

“When it’s an infectious disease outbreak, you don’t want people to delay seeking a diagnosis and getting into treatment of some kind,” Levi says. But someone without health insurance may think, “Oh, if I go to the emergency room and I get a $2,000 bill, and what if I don’t even have it? I’m still going to get a bill,” he says. “That’s just going to make you hesitate until you are very sick.”

Paul Erwin agrees. “The lack of insurance plays a huge role in terms of access to care,” he says. “People who don’t have insurance are reluctant to seek care until things get to be dire for them. By that time, it can be difficult to provide them with treatment that will make a difference.”

In addition to lacking good health insurance, many people living in southern and rural states face a barrier of distance, says Catherine Flowers, a community health advocate who lives in Montgomery. (Flowers was the driving force behind a study that found a high prevalence of hookworm among rural communities Alabama.) “People in cities are having a hard time getting tested, but can you imagine if you have to drive 30, 40, 50 miles to get to the place—only to be told you can’t get a test? Then what’s going to happen?”

Finally, there’s the question of how the cultural and societal fabric might influence the pandemic. The Fort Worth Star-Telegram has reported that rural counties are generally more skeptical that the disease should concern them. “Other than city folk coming down trying to buy all our toilet paper, we haven’t been affected,” one volunteer fire chief told the newspaper. On his blog Trouble in God’s Country, Charlie Hayslett, a former newspaperman from Atlanta, wrote, “as I’ve documented before, rural Georgia is overwhelmingly Republican and pro-Trump, and there’s already national polling by Pew Research suggesting that Republicans are taking COVID-19 less seriously than Democrats.”

In a March 19 post, Hayslett lamented how people in the country seemed slower to restrict large gatherings, especially Sunday worship. “I started canvassing rural Georgia contacts earlier this week and one common theme in the feedback revolved around a reluctance to cancel church services; as things have worked out, it sounds like the cancellations are indeed taking place, maybe a week later than they might have,” he said. This is not simply a small town phenomenon. One Baton Rouge megachurch, in defiance of the Louisiana governor’s order to limit gatherings, held a Sunday service of more than 1,000 people on March 15, and another service two days later. So did First Baptist Church in Dallas, which has a flock of 14,000.

That said, the response varied from city to city: Church of the Highlands, the largest congregation in Alabama with more than 50,000 members, announced on March 14 that all services in its 22 locations would be online. The church is also hosting a testing site, and partnering with food banks and schools support people in need. A message on the church web site reads, “Many of you have expressed a desire to help, reminding us yet again why we love being part of the local church with you.”