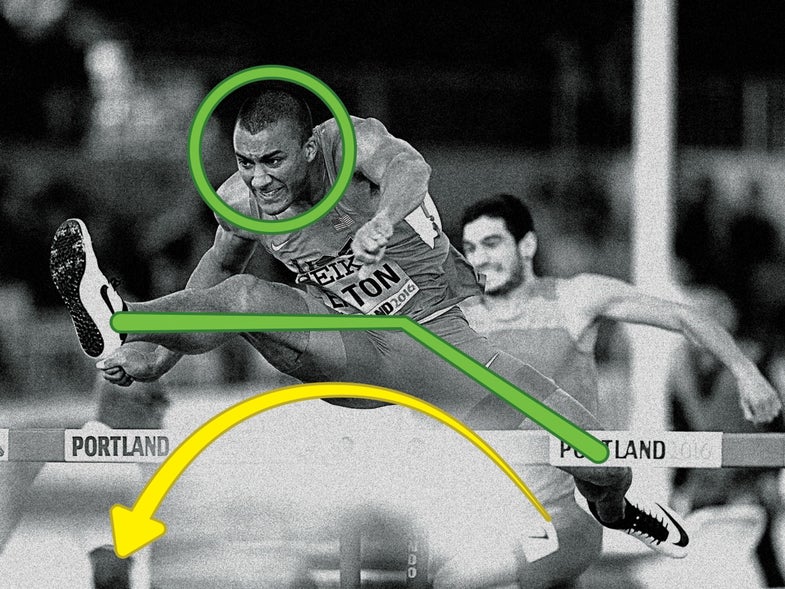 It’s hard enough to excel in one sport—but 10? Decathlete Ashton Eaton, who won gold in London four years ago, is one of those rare specimens who can. He outruns, out-jumps, out-throws, and outlasts just about anyone on the planet. A master of body mechanics, from javelin throwing to pole vaulting, he, like all athletes, studies his every micro-movement in order to win—cataloging and analyzing each foot plant and finger wrap. But he also pays attention to how he feels each time. And he records it all with some technology he bought in the App Store.

The first would be familiar to any 12-year-old who’s kept a diary. It’s called Day One, a $4.99 journaling app for smartphone or iPad. In it, Eaton logs his every training nuance, recording his results and his sensations. “The secret is being able to connect a feeling with the hard data from a performance,” he says. “For instance, I’ll do a shot put rep in practice and I’ll feel a certain way about it. If I have a good feeling and the shot put goes far, that’s a strong connection I want to be able to make later.” The app’s search feature lets Eaton instantly comb through years of workouts and personal bests to find each micro adjustment that led to a breakthrough. He refers to his method as “fast data storage and retrieval.”

“I could run a 250-meter workout and then look at my time from the same day a year earlier,” he says. “And I can designate tags for running, shot put, javelin, or high jump, and see how many workouts of that type I’ve done.”

When Eaton needs to capture crucial intel in real time, he uses a $120- to $500-a-year subscription-based app called Coach’s Eye. It lets his trainer record his moves on an iPhone, overlay voice notes, draw on freeze-frame images, or even measure the angle of, say, Eaton’s elbow. It also has a scrubbing feature—the ability to scan in slow motion, backward and forward, and to examine micro movements. “We tend to break movements into three phases: the start, middle, and finish,” says Eaton. But even within those movements, his coach breaks it down into smaller phases. “So it’s great being able to drag your finger on the screen and really see in each frame a more technical aspect of what you’re doing,” he says.

Eaton then learns from what he sees and makes adjustments to his form on the spot. It’s a technological leap from when the 28-year-old athlete was a kid, watching athletes on TV and trying to mimic their movements the best he could. “I was never quite sure how close I got,” says Eaton. “YouTube wasn’t even around, and we never did any of our own videoing back then.” Now that the best movements to mimic are his own (on a good day), he’ll know exactly how close he gets. And it’s a lot easier than trying to take a selfie while throwing a javelin.