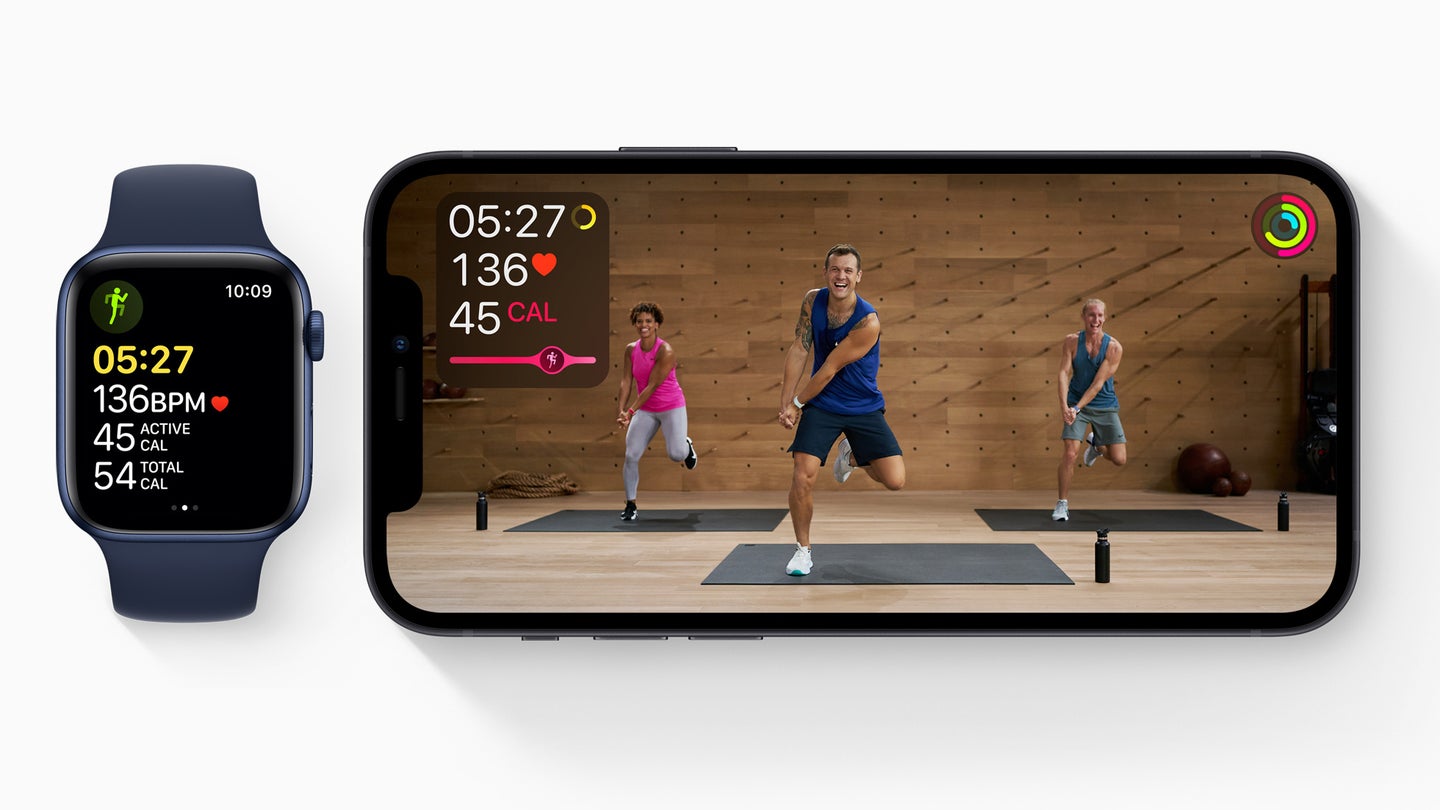 Apple Fitness Plus would work great in the woods with a rugged Watch. Apple
SHARE

Gadget rumors can be fun to follow and speculate about, but they aren’t always the most reliable sources of information. Here’s a rundown of some of the most prominent tech rumors circulating at the moment as well as some insight into how likely it is they will come true.

Success has never been about specs for the Nintendo Switch. But, according to a Bloomberg Report, the plucky console will be getting a high-tech upgrade sometime this year. The Samsung-made OLED would consume less battery than the typical LCD found in the current Switch. It would also provide more contrast. The report also claims that the new Switch version would crank out 4K graphics when connected to a TV, which would be an improvement over the current-gen.

Gutcheck: Nintendo has had no problem whatsoever selling Switch consoles, but the machine is now turning five years old. The system also now has to compete with increased demand for next-generation consoles from Sony and Microsoft. While Nintendo’s best bet is typically to just release a new Mario game or bring back some well-worn classics from days gone by, now seems like the right time for some technical upgrades.

Hyundai and Apple are no longer developing a self-driving car

Recently, a Reuters report claimed that Apple’s self-driving electric car project—known internally as Project Titan—could come to fruition by 2024. CNBC suggested that Apple had almost finalized a deal with Hyundai to act as its manufacturing partner. The vehicle would rely on a new kind of battery technology that would reportedly increase range while decreasing price. Because of the reduced cost, Apple’s ride could work as a personal vehicle rather than as part of a ride-hailing taxi service like Google envisions its Waymo project to pan out. The cars would reportedly be assembled at a Kia plant in Tennessee.

Since then, however, Hyundai has publicly stated that it’s no longer working with Apple. A statement put it plainly: “We are not having talks with Apple on developing autonomous vehicles.”

This doesn’t mean that the Apple Car will never come to fruition. Reports suggest, however, that Apple is looking for a partner to simply handle the manufacturing, while Tim Cook and co. would hold onto the hardware and software development. That’s apparently what turned Hyundai off to the project. We’ll likely hear more rumors about potential partners down the road, well before the Apple car puts rubber to the road.

Rumors about Apple’s VR/AR headset have been circulating for years, and it could finally see the light of day in 2022. The project has reportedly hit development snags along the way. When it does finally hit shelves, reports claim it will be more expensive than its already-pricy competition. Its processor will be even more powerful than the M1 chip and it’ll have a built-in cooling fan to accommodate the processing power. The first product will act as a precursor to the company’s alleged AR glasses coming in the more distant future.

Gut check: This is one of the longest running rumors around it’s well-known that Apple has been working on VR rig for quite some time. With the company’s Lidar sensors showing up in more products, including the iPad Pro, it seems like it’s getting closer all the time to having all the pieces assembled.

At the end of 2020, Apple introduced its first laptops powered by its new X1 chip. It was the first generation of machines running on Apple’s own silicon after its breakup with Intel, and the resulting products were extremely impressive. It left people wondering when the bigger MacBook Pros would show up on the scene.

According to TF International Securities analyst Ming-chi Kuo, those MBPs will show up in the middle of 2021—and they may come with some very welcome upgrades. The report claims Apple will switch back to its MagSafe power adapters, which easily disconnect from the machine should you snag the cable. It’s a feature that’s sorely missed. The new laptops may also ditch the generally maligned Touch Bar that relegates common keyboard functions to a finicky touch-sensitive surface right in front of the screen.

Some reports also claim that the SD card reader will be coming back, which would mean the MacBook Pro would have almost fully reverted to its pre-Touch Bar glory.

Gut check: Kuo is a reliable source when it comes to Apple information, so the rumor’s pedigree is solid. It would also make sense for Apple to bring some form of MagSafe back to its laptops now that it has been reborn as a system to charge iPhones. As for the Touch Bar, that feature has garnered a steady stream of negative reactions from reviewers, so nixing it could be a good way to give the new computers a slight advantage over their aging counterparts.

While Samsung and many other manufacturers have been concentrating their efforts on folding devices, LG has been long-teasing a phone with a screen that unrolls to expand into a small tablet. The device would look like a typical smartphone when collapsed, but it could extend into a much larger display using LG’s now-familiar flexible OLED screen tech.

Gut check: We know it’s real—LG briefly showed the device called Rollable during its CES 2021 press conference. In fact, it was the opening shot of the presentation. The phone is reportedly headed for store shelves later this year, but we don’t have much more information beyond that. So far, LG has only sold its rolling screen tech in a massive TV that costs more than $80,000, so you shouldn’t expect the first generation of the Rollable phone to come cheap.

Alexa-powered smart devices can already see and hear what you’re doing via connected smart devices, but Amazon may soon offer a device that watches people sleep in an effort to identify and manage sleep apnea. The device will reportedly sit next to a person’s bed and use millimeter-wave radar waves to observe their breathing patterns, which apnea alters.

Gut check: Amazon jumped into the fitness tracker space last year and it has been slowly increasing the number of connected devices it offers for people to place around their homes. Radar is capable of monitoring a person’s sleep and several companies—including Nintendo, oddly—have floated the idea for a radar-based sleep tracker in the past. Considering how prevalent health and wellness devices were at the 2021 CES show, this doesn’t seem far-fetched for Amazon at all. But is it creepy? You decide.

Microsoft is planning to give Windows a visual makeover

This one traces back to a job listing Microsoft posted online. It’s for a member of the Windows Core User Experience Team and it’s seeking someone to work on a “sweeping visual rejuvenation of Windows experiences to signal to our customers that Windows is BACK.”

The changes would include redesigning basically all the graphical elements associated with the operating system. The File Explorer and Start button will look different, and some core apps will get visual upgrades to match.

Gut check: Microsoft hasn’t exactly been hush-hush about its intentions to make Windows look swankier. Thanks to its Fluent Design system, the company has the means to make system-wide changes to the look of its OS, and it seems likely that will be the case before the end of 2021.

Testers at Foxconn in Taiwan may already be testing prototype versions of the folding iPhone. Still, rumors suggest we won’t see the final product launching this year with the iPhone 13, but rather in 2022. And, it may come toting a flexible version of Apple’s super-tough ceramic screen coating to protect that flappy display.

Gut check: The company already owns several patents regarding flexible screen mobile devices. The early information is still rather scattered, with some reports claiming that it will be a single folding screen and others suggesting it will actually be two different displays with a hinge in-between similar to the Microsoft Surface Duo. We’re not expecting it this year, to be sure, but maybe something will emerge by 2022.