The Ugly Business of Extended Warranties

Worth the money? The Grouse weighs in 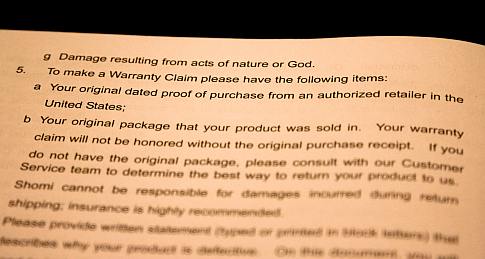 Were you suckered into buying an extended warranty on a tech purchase this past holiday season? Take a closer read of the fine print, because you’re not as covered as you might think. Scratches? Not a chance. A power surge? If you’re lucky. Nuclear holocaust? Nope. But, more on that later.

I’ve always thought of these extended warranties as thinly veiled forms of extortion. Think about it. I pay the manufacturer more money than my new gadget is worth (by the manufacturer’s own estimation), and suddenly its quality, durability, and longevity are guaranteed to be better. Is this a different, upgraded version of the product I was about to buy without the extended warranty? No. The manufacturer seems to be willing to stand by the quality of its product for an additional two or three years on top of the standard one-year warranty. Why I should have to pay for this guarantee is beyond me.

The old extended warranty grift has been top of mind lately — what, with all of my new gifts just waiting to break down in three months to a year. I’ve never bought one. I never much saw the point. I have trouble reconciling a 10- to 25-percent tax on a new digital trinket in order to safeguard it against some unforeseen and unlikely future event. Every time I’ve needed a gadget repaired, it’s always cost me less than the bloated price of an extended warranty. And quite frankly, I don’t like the way these little insurance policies are sold. The salesperson never mentions it until my credit card is out of its holster and at that point I’m already daydreaming about bringing the new toy home. Then, when I do decline additional coverage, I’m treated like some kind of criminal daredevil who doesn’t know what’s good for him. I swear I’ve actually had a salesperson step back in surprise as if my fanatical irresponsibility might somehow infect him.

That was the old me.

Just before the holidays, and less than 30 days after the clock ran down on its one-year warranty, my precious MacBook decided it just didn’t feel like turning on anymore. Of course, I hadn’t enrolled in AppleCare and as a result had to part with more than $500 to replace my trusty workhorse’s logic board and SuperDrive. That’s double what an AppleCare plan would have cost at the time of purchase and I’d still be covered right now for another two years. As it stands, I have to pay out of pocket again if something else goes wrong with my Mac. Oh, how I wish I’d enrolled. How foolish and reckless I was.

While AppleCare would have covered the very specific problems my MacBook was experiencing at that moment, I’m surprised by what it wouldn’t cover me for. A close read of the AppleCare terms reveals that I wouldn’t be covered for scratches, dents or even broken plastic on ports. It also exempts Apple from having to fix problems related to power surges, heat or humidity and specifically “acts of God.”

Purchase a Mac (or anything else) at Best Buy and you can opt for a two-year Geek Squad Black Tie Protection plan, which costs exactly the same as an AppleCare plan to cover you for the same product. Interestingly, the Best Buy plan does cover things like power surges and humidity, but there’s a serious catch that I’m sure goes unnoticed by the majority of folks who purchase this plan. Read the fine print and you’ll find that the first year of your Best Buy coverage overlaps with the built-in one-year warranty you’re already getting from the manufacturer. Anything that goes wrong with your purchase in that year is the responsibility of the manufacturer and not Best Buy. That means you’re paying for a full year of absolutely nothing! It also means, in the case of an Apple purchase, that you’re out of luck regarding any heat-, humidity- and surge-related problems that occur in the first year since Apple’s one-year warranty doesn’t cover them. If you’re good at math, you’ve realized by now that Best Buy’s plan is not in fact the same price as AppleCare, but double.

In New York City, our hometown electronics chain J&R offers AppleCare, but it also hawks a plan dubbed “Repair Master,” which is managed by a nationwide company named Warrentech. Repair Master also runs the same one-year overlap scam as Best Buy, but its price is so affordable that it doesn’t much matter. Two years of extra coverage on a MacBook Air (buying the three-year plan) is just $179. The AppleCare equivalent costs $249, as does half the coverage from Geek Squad. Read the fine print and you’ll find that Repair Master covers damage related to heat, humidity and power surges. You’ll also find a few unexpected laughs. For example:

Good to know. But, here’s something to consider: Best Buy and Apple are well-known companies with (arguably) good reputations. I never heard of Repair Master until yesterday. Not to mention the fact that Best Buy stores and Apple Authorized Service Providers are everywhere, meaning that the repair shop is never more than a few miles away. If you’re going to consider additional coverage through Repair Master, first be sure you live close to a servicing partner.

In the end, I guess it turns out I’m pro-extended warranty after all — as long as the consumer is totally aware of what he or she is buying into. It sure would have saved my butt this year. And, if I can leave you with just one nugget of wisdom, let it be this: Don’t be fooled into thinking you need to buy an extended warranty at the same time you’re purchasing your new gadget. Best Buy gives you 14 days from the date of purchase to make up your mind. Apple gives you an entire year to mull it over. So, go home and think it over. There’s no reason paying for additional coverage if you think nuclear Armageddon is just around the corner.