Dinosaur cannibalism was real, and Colorado paleontologists have the bones to prove it 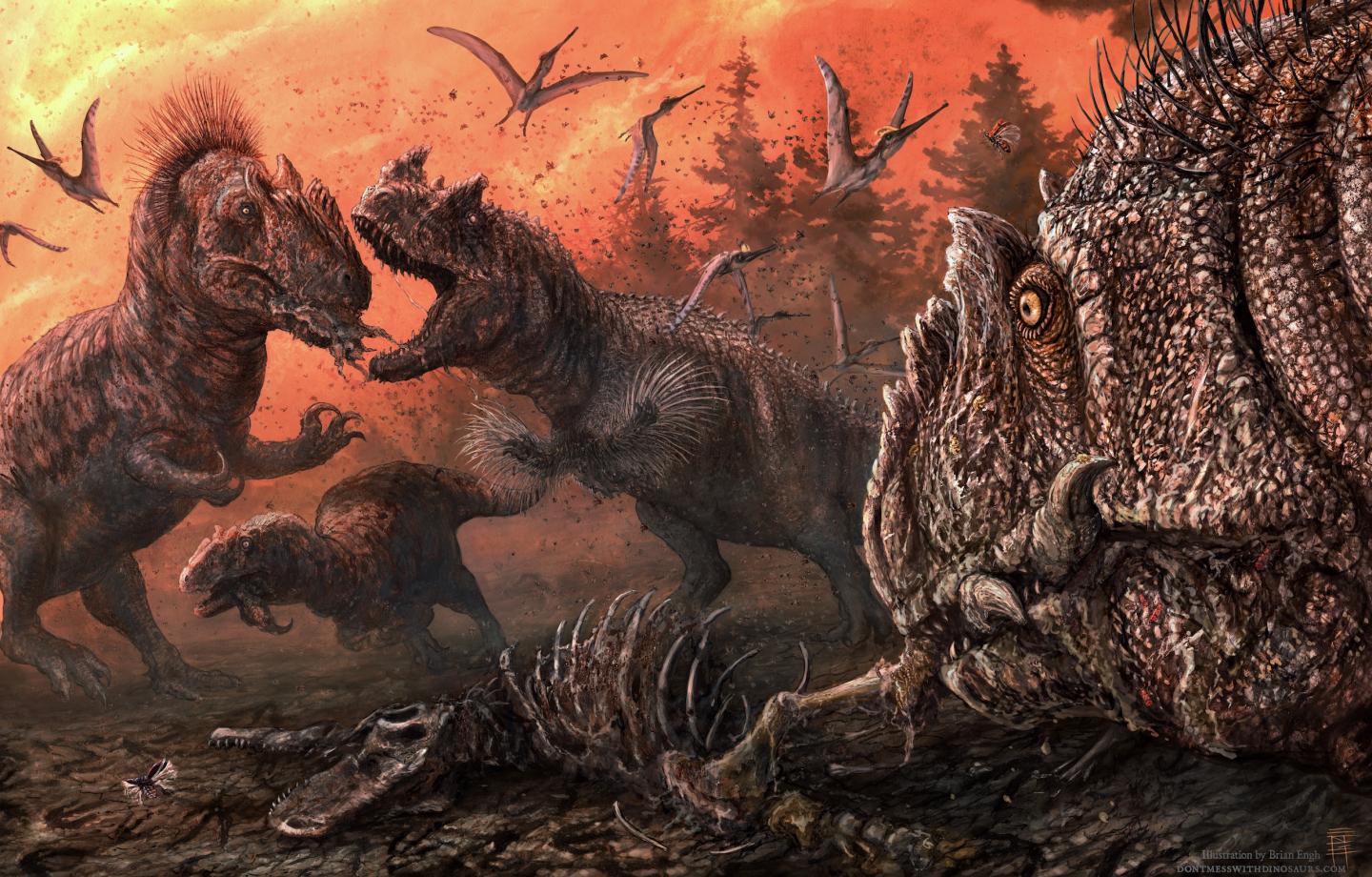 Fossils collected from the Mygatt-Moore Quarry, which lies near the border between Colorado and Utah and dates back to around 150 million years ago, bore an unusually high number of bite marks. Brian Engh
SHARE

A series of bite marks on fossilized bones from present-day Colorado reveal that the Jurassic dinosaur Allosaurus was not above eating members of its own species. The findings are the first direct evidence of cannibalism for this group of predatory dinosaurs, paleontologists reported May 27 in the journal PLoS ONE. The researchers also found that fossils collected from the Mygatt-Moore Quarry, which lies near the border between Colorado and Utah and dates back to around 150 million years ago, bore an unusually high number of bite marks. This may mean that Allosaurus and its neighbors were living under difficult conditions and were forced to scavenge any scrap of food they could find.

“At this site they’re eating every single bit of the skeleton, anything they could get their mouth around,” says Stephanie Drumheller, a paleontologist at the University of Tennessee in Knoxville and coauthor of the new findings. “At least under certain circumstances, these big Jurassic theropods were perfectly willing to scavenge anything that was available, including each other, and they were accessing bones as a food resource.”

She and her team examined more than 2,300 fossils excavated from the Mygatt-Moore Quarry over a timespan of more than three decades. Typically, bones with bite marks left by predatory dinosaurs or scavengers are a rare find at sites like this. These scores and gouges can reveal a lot about ancient ecosystems, though. “Bite marks are direct evidence of an interaction—a snapshot in time,” Drumheller says. “We can use these bite marks to figure out who was eating whom [and] specific feeding behaviors.”

Some researchers think that dinosaurs from this era preferred to munch on soft tissues and mostly ignored bones, which would explain why bite marks are so rarely seen on fossils dated to that time. If so, dinosaurs would resemble present-day Komodo dragons—which occasionally nick bones while dining on their prey’s flesh—rather than animals that regularly smash or crunch bones into pieces and eat the marrow inside, such as hyenas and crocodiles.

The new findings also indicate that predatory dinosaurs may have paid more attention to bones than we previously understood. Drumheller and her colleagues found bite marks on nearly 29 percent of the bones from the Mygatt-Moore Quarry, a proportion that, she says, “is off the charts for what you’d expect at a site like this.”

Some of the bones were subtly pitted, while others were profoundly damaged by deep punctures and furrows. In some cases the marked bones—particularly those that came from herbivorous dinosaurs—corresponded to body parts that hungry dinos would typically feast on, such as the thigh or organs. But many of the gnawed-on bones belonged to carnivorous dinosaurs, and those bones tended to come from some unexpected places like the spine and toes, which don’t have a lot of meat on them.

“Predators are lazy and they will typically go for the easiest food first,” Drumheller says. “If all you’re chewing on are toe bones, you’re probably really late to the party and somebody else ate all the nice stuff first and this is all that’s left behind.”

During the Jurassic Period, Colorado was not an easy place to make a living. The region was periodically ravaged by major wildfires and droughts. During the dry season, food may have been very scarce, leaving large predators like Allosaurus with fewer plant-eating dinosaurs to hunt down. In order to sustain themselves, they might have relied on carcasses that had already been picked over by other animals.

Another possibility is that scavenging was a routine part of these dinosaurs’ lifestyle. “Maybe what we’re seeing at Mygatt-Moore is actually normal, but our collection practices have led us to think it’s not,” Drumheller says. It’s uncommon for researchers to bring back every battered and broken fragment of bone they find at a site for museum collections. In recent years, however, paleontologists who work on the Mygatt-Moore Quarry have shifted to collecting all the fossils they discover in bulk. This bounty of bones might offer a fuller picture of what dinosaurs from this site were eating.

Based on the size and type of marks left on the bones, Drumheller and her colleagues were also able to infer that most of the marks appear to have been created by the serrated, steak-knife-like teeth of Allosaurus. In some cases, much to the researchers’ surprise, the damaged bones also belonged to an Allosaurus.

“They were probably opportunistic predators that would eat whatever they could,” Drumheller says. “They weren’t very picky; if it happened to be a distant relation, then that was fine.”

While cannibalism is not uncommon among modern predatory animals, it’s extremely rare to find signs of it preserved in fossils. Paleontologists only have compelling evidence of cannibalism occurring in two other large dinosaurs, one of which is Tyrannosaurus rex.

The Allosaurus bones that Drumheller’s team examined show no signs of healing, which might be expected if the dinosaurs had instead been injured in a fight with other members of their species. “The lack of healing at the tooth marks indicates that these bites all occurred either very near to death or afterwards,” Matthew McLain, a paleontologist at The Master’s University in Santa Clarita, California who was not involved in the research, said in an email. “Bite marks in places that could only be reached after death indicate that some of the carnivorous dinosaurs were actually eating each other.”

McLain, who has done research describing a young Tyrannosaurus that was likely fed upon by a larger peer, added, “It’s likely that some of these tooth-marked Allosaurus bones were bitten by other Allosaurus, which is good evidence for cannibalism.”