Schools, offices, and businesses need more options to fill the gaps in testing. 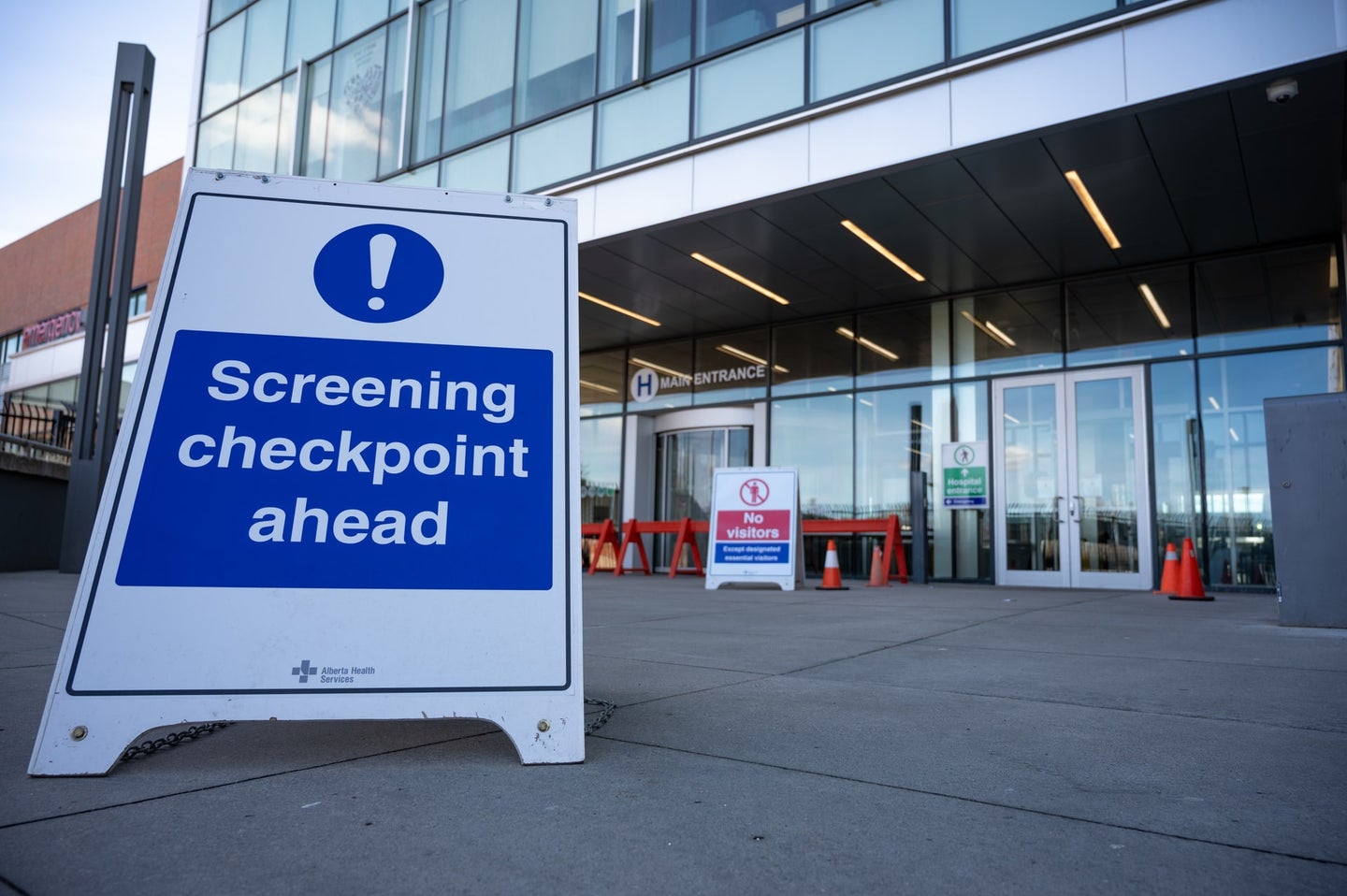 Many hospitals like this one in Alberta, Canada, have set up screening checkpoints for COVID-19. Other facilities can do the same. Graham Ruttan/Unsplash
SHARE

Zoë McLaren is an associate professor of public policy at the University of Maryland, Baltimore County. This story originally featured on The Conversation.

Broad access to testing is one of the most powerful tools to keep the COVID-19 pandemic under control until there’s an effective vaccine in use. Diagnostic testing, which is used in medical settings to determine whether someone is infected with the coronavirus, is costly, slow and overstretched in the US. But that’s not the only type of test that can be used.

I study public health policy to combat infectious disease epidemics. To slow the spread of the virus, public health programs need to catch more COVID-19 cases and catch them before they spread. Innovative screening tests offer promise because they are inexpensive, rapid, easily mass produced and don’t require laboratory processing. They can be implemented at large scale for frequent testing in schools, workplaces, airports, and even at home. With screening tests, huge numbers of people could be tested regularly and contagious people would be identified before they could spread the virus far and wide.

What is screening testing?

Ideally, the US could provide frequent, accurate diagnostic testing to the whole population, but diagnostic capacity is struggling to keep up with demand. Screening tests make it possible to test large groups of people frequently, including those without any symptoms.

Screening tests are designed to work in a similar way to the X-ray screening of carry-on baggage at airports. X-ray screening is imperfect–some harmless items may prompt a more thorough search and some dangerous items might slip through–but it is fast enough to screen every bag and good enough to catch the majority of potential weapons.

The key, for any screening test, is that it must have a consistent rate of false positives and false negatives. If the user knows exactly how accurate it is, then they can correctly interpret their likelihood of having COVID-19. The Food and Drug Administration generally verifies the test accuracy during the approval process, but it could also be done by another government agency.

Many fields of public health employ screening test strategies. For example, thermometer-based screening was used during the SARS and Ebola epidemics. Unfortunately, temperature checks miss a lot of COVID-19 cases because an estimated 40 percent of people with COVID-19 show no symptoms at all. Many COVID-19 reopening plans incorporate temperature checks since they will catch some cases, but a better screening method is needed.

Which tests work for COVID-19 screening?

Several COVID-19 screening tests that cost $1 to $5 each and give a result in around 15 minutes have been developed, and many more are in the pipeline. These tests don’t require a laboratory and can be processed on-site. Many use antigen-based testing, which detects specific proteins on the surface of the virus.

Screening tests come in many different forms. The FDA recently granted Emergency Use Authorization (EUA) to Quidel and BD for antigen tests that use a small portable point-of-care machine to process samples. Though Quidel reports accuracy rates above 95 percent, the FDA cautions that the rate could be lower because the test hasn’t undergone the full FDA approval process.

One of the most versatile options for testing is the saliva-based paper-strip test, which only requires a paper strip and a test tube. It could easily be used at home.

Many inexpensive COVID-19 screening tests may not be as accurate as diagnostic tests. But screening tests with even moderate levels of accuracy can actually still effectively slow the spread of the virus, as long as the results are interpreted correctly.

Here’s how this works.

First, frequent testing catches the vast majority of cases. Someone who is infected but gets a false negative and slips through the cracks is likely to be caught the next time they’re tested. For a test that misses 20 percent of positive cases, the chance of an infected person getting two false negatives in a row may be as low as 4 percent. It’s like bailing a boat with a leaky bucket: You just have to bail more quickly to get the job done.

Finally, those who get a screening test need to know how to interpret the results. Diagnostic tests can tell you whether you’re infected with a high level of certainty. An inexpensive screening test is not as certain, but is still useful. For example, a positive result would mean that you have a high chance of being contagious, in which case you may want to take a diagnostic test for confirmation and quarantine if possible in the meantime. A negative result would mean that you have a low chance of being contagious, but it couldn’t be ruled out. In this case, it would still be important to stay vigilant about COVID-19 transmission.

While screening tests are not as accurate as diagnostic tests, they’re a big improvement over flying blind because they provide useful information about whether someone is contagious. The weather report may not be able to tell you with certainty whether it will rain or not, but it can tell you whether it’s a good idea to bring an umbrella.

Several companies are ready to scale up production of screening tests. The primary barrier is the delay in government approval. It’s difficult for screening tests like saliva-based paper-strip tests to achieve the performance required for approval as a COVID-19 diagnostic test while remaining inexpensive and easy enough to allow for widespread and frequent testing. By creating new approval pathways specifically for screening tests, the FDA or another government agency could quickly put more of these tests into use.

Those who see the potential of rapid screening tests are already taking action. A group of governors plan to secure rapid tests that have been granted an Emergency Use Authorization without waiting for full FDA approval. This will make it easier for those states to get back to in-person school and work safely. It is no exaggeration to say that innovative screening tests are a game-changing tool to fight the coronavirus and keep it at bay.