Love the taste of whiskey? Thank an oak tree

Excerpt: The Flavor of Wood 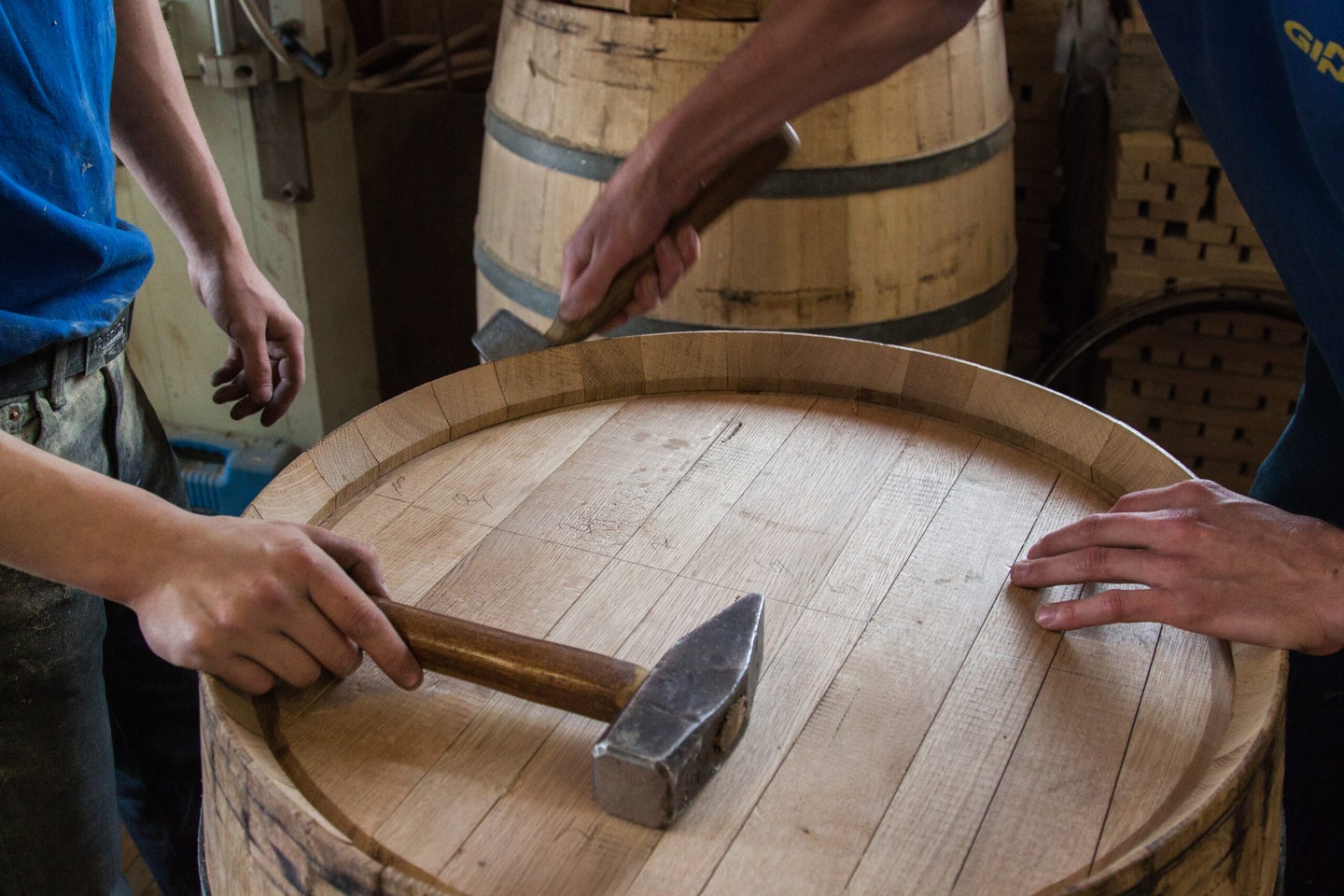 How a tree becomes a barrel. Courtesy of Artur Cisar-Erlach
SHARE

Historically the wooden barrel has been the world’s most important shipping container, only comparable to today’s large iron shipping containers, the holding vessels of our globalized consumer society. Like the shipping container, the wooden barrel has been used to transport an extremely wide variety of commodities, ranging from apples, gunpowder, salted meat, cement, coins, flour, fish, molasses and pickles to tobacco, linens, tar, seeds, vinegar, potatoes, oysters and, of course, beer, wine, and whisky, the transport of which they are still used for today.

Driving through the center of Waidhofen an der Ybbs in Lower Austria feels like taking a trip back in time. My GPS insisted I drive down a narrow and increasingly steep road at which end the Cooperage Schneckenleitner supposedly was located. Still unsure and rather alarmed by the ever-narrowing road right next to the river, suddenly I was confronted by a scene right out of a medieval play. Partly situated under the arcs of a tall stone bridge was, indeed, a cooperage. I saw rows of wooden barrels, piles of staves, and people hammering iron rings around half-finished barrels.

Once properly re-parked, I was finally ready to find the cooperage’s young manager, Paul Schneckenleitner, Jr., with whom I had spoken on the phone the day before. Quite proudly he told me that it had been in the family since 1880, which meant that he was now the fifth generation running it.

Contrary to my belief that the arrival of the tree trunks was the starting point of Schneckenleitner’s work, I was curious to learn that the barrel-making process starts with the tree still standing in the forest, when the experienced cooper chooses the right trees for his barrels. Schneckenleitner still relies on his father and uncle for this sensitive task; they travel personally from woodlot to woodlot selecting suitable trees in Austria, Germany, and even France.

Trees must be felled during the cold winter months, when the tree sap has retreated deep into the roots and the wood pores are therefore closed. Once it arrives at the sawmill, the wood destined for smaller barrels is hydraulically split (avoiding damage to the natural wood fiber structure), and that for bigger barrels is quarter-sawn into staves; the trunk is first sawn into quarters and then each quarter is sawn into boards, with the saw blade parallel to the centerline of the quarter. Immediately afterwards, the boards are stacked outside to dry, sometimes for years. Rain, wind, ice, snow, scorching heat, and heavy fog wash out the wood’s harsh tannins and transform the flavor characteristics. Additionally, location- specific bacteria and fungi break down chemical compounds in the wood, therefore making them soluble to alcoholic liquids. This meant, unmistakably, that a barrel has terroir, a term mostly used in the wine world to describe the specific environmental conditions (soil, topography and climate) that produce its unique taste.

At his family’s cooperage every barrel is made to order, which means that customers can choose between several standardized sizes and, most importantly, select an intensity for the char layer on the inside of the barrel. This so-called toasting process has a strong influence on the flavor characteristics of the barrel, the most obvious one being a smoky note.

Having seen the whole production process, I was keen to ask something that has nagged me since I began my quest. Why is the world of barrel making and ultimately the whole wine and spirits sphere so dominated by the oak?

According to Schneckenleitner, it simply comes down to demand. No one really seems to be asking for barrels made from other wood, although there are some wineries that still order small amounts of acacia wood barrels, favored for their very light, fruity taste. There are certain limitations on which kind of wood can be used, as it must have rather tight pores and shouldn’t be too soft or brittle in order to survive the duress it undergoes during the barrel-making process. Fascinatingly, though, he remembered that his father once made barrels from larch, which is relatively durable but much softer than oak.

I soon realized that there were many different components that influenced the unique flavor profile of a barrel and even more so when it came to the spirit itself. Let’s take whisky as an example. Some studies actually identified up to four thousand nonvolatile (nongaseous) compounds in oak-barrel-aged whisky, whereby each different chemical part of the wood plays an important role. Bearing a striking resemblance to a sponge when viewed under a microscope, the wood structure consists of parallel strands of cellulose (long chains of complex sugar molecules that make up the main component of the very paper these lines are written on), which are wrapped in a mash of hemicellulose (variably organized complex sugar molecules), which in turn is interwoven with lignin strands (a highly complex polymer that binds cells together and is, for example, responsible for the crunch in vegetables104). In between this extremely strong, yet flexible structure, varying amounts of proteins and extractive substances are deposited.

The hemicellulose contributes wood sugars, which are important for the body of the whisky. During the toasting process of barrel production, they are caramelized, which contributes strongly to the whisky’s unique amber color. Lignin gets broken down by the ethanol in spirits into important flavor compounds like vanillin, which adds to spirits the very notable vanilla flavor, the oak’s signature taste. Furthermore, it also contributes to the color. Extractive substances like tannins and lipids introduce a certain amount of astringency and remove notable off-notes, like the sensation of a rubbery taste sometimes present in a fresh distillate. American white oak barrels additionally have a high amount of lactones, which are derived from lipids in the wood. Lactones give the whisky a somewhat woody flavor (old bookstore sensation) and a hint of coconut.

Overall the charring of the barrel plays a very significant role, as it not only breaks up hemicellulose, lignin, and lipid structures, which later react more readily with the ethanol, but also removes off-notes by essentially creating a layer of active carbon (used in many filters). Moreover, some parts of the char layer are themselves dissolved, which gives a certain smokiness to the whisky. With the different influences of the wood chemical components in mind, I set out to find some intriguing wood species whose taste I wanted to explore.

The Australian eucalyptus had an extremely gratifying taste of caramel or sweet toffee that was very long-lasting, while the mahogany reminded me of green tea with a hint of smokiness, like a pine-smoked Lapsang Souchong made from green tea, rather than black. As the flavor profile developed in the mouth, however, it became more and more astringent, a problem that could be most likely fixed by properly exposing the staves to the elements and thereby washing out the harsh tannins. A strong, sweet, long-lasting taste of marshmallow was the flavor surprise the larch had in store for me, while the alder initially tasted like a first flush Darjeeling tea but very soon developed a perfect raspberry flavor.

I was speechless; four more or less randomly selected woods had resulted in four completely different flavors, from sweet toffee to smoky green tea and from raspberry to a marshmallow. With 80,000 to 100,000 tree species in the world, what a galaxy of flavors there was still to discover.

Excerpted from The Flavor of Wood: In Search of the Wild Taste of Trees, from Smoke and Sap to Root and Bark, © 2019 by Artur Cisar-Erlach. Reprinted with permission of Abrams Press.