NOAA is changing the way it talks about hurricanes

Storms are getting worse and more people are in the way than ever, so meteorologists are working on ways to improve their communication. 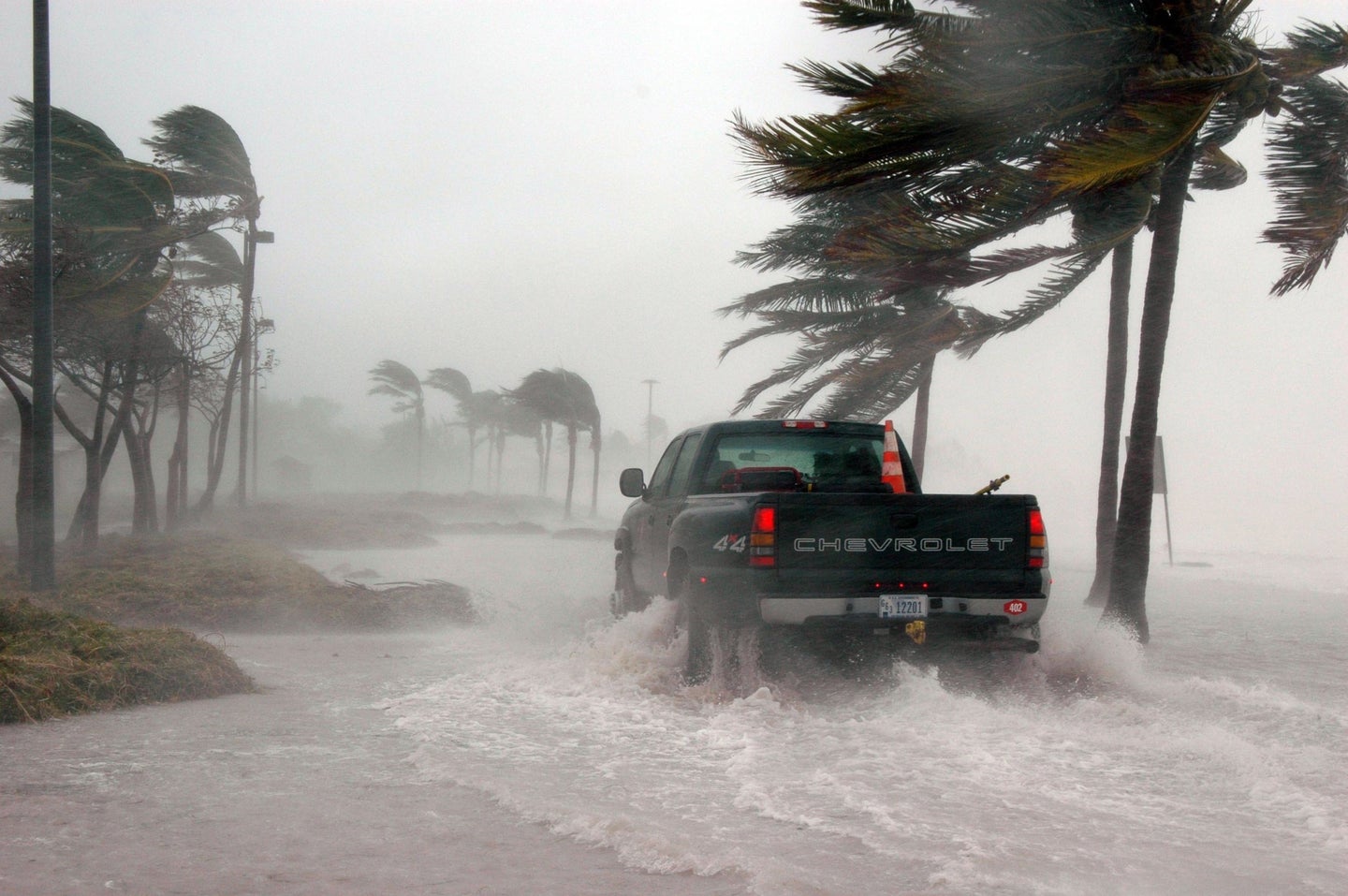 A day before Hurricane Laura made landfall, the National Hurricane Center issued a warning of “unsurvivable storm surge” in parts of Texas and Louisiana. It’s a phrase that quickly captured widespread attention. Many journalists, including at Wired, NPR, BBC, Mother Jones, Vox, and here at Popular Science, ran headlines amplifying this message. Senator Bernie Sanders repeated this language in a tweet. The National Hurricane Center’s tweet with this message was shared over 12,000 times. Both Texas Governor Greg Abbott and Louisiana Governor John Bel Edwards borrowed this phrase in urging residents to evacuate.

It’s hard to definitively say whether this unsparing language influenced evacuation decisions, but “the fact that we don’t know of any direct storm surge fatalities from Laura is hopefully a testament that people did get that message,” says Michael Brennan, the branch chief of the hurricane specialist unit at the National Hurricane Center. This highly-trafficked phrase is also a testament to just how critical it is to communicate the specific dangers posed by an incoming storm — even a simple choice of adjectives can make a difference in how information is disseminated. As climate change brings intensified hurricanes, the language, visuals, and communication tools used to convey the increasing dangers of storms become all the more crucial.

Part of the challenge of communicating the dangers of a hurricane is that we don’t have a single warning system, which means that meteorological information can be interpreted many times over. “A lot of the information originates with meteorologists and with the National Weather Service, but then the way it gets communicated is through broadcast media, people on Twitter, people who are regular weather enthusiasts, and people who are just passing on information,” says Rebecca Morss, a senior scientist and expert on risk communication at the National Center for Atmospheric Research.

“So how do you effectively insert information into this large, amorphous communication system that we have today?” says Morss.

The success of “unsurvivable” lies in not just its ability to convey urgency, but that it precisely describes the potential impact of the storm surge. “Our definition for life-threatening begins with 3 ft of inundation, which is enough to drown children,” says Brennan. “We were talking about a situation where there were going to be 15 to 20 feet of inundation, so way beyond the life-threatening definition.” So, how do you describe something that extends so beyond the storm surge height that is considered life-threatening? Unsurvivable.

This word choice is also part of a broader effort among hurricane experts, including at the National Oceanic and Atmospheric Administration and the National Center for Atmospheric Research, to communicate more about specific hazards—like storm surge, heavy rainfall, and tornadoes—and to help people clearly understand the impact of these hazards, which also depends on the local geography and infrastructure.

“People are kind of obsessed with the details of the storm itself. You know, what category is it? What are the peak winds? Are they higher or lower than they were three hours ago or six hours ago?” says Brennan. “When in reality, we want people to focus on the hazards and understand their vulnerability to those hazards.”

Rather than communicating just about rainfall, therefore, Brennan says that the National Hurricane Center and the Weather Prediction Center are focusing more on communicating flood risk. After all, just focusing on rainfall doesn’t effectively communicate the potential destruction. “Three inches of rain in an hour does a very different thing if it falls in South Florida, where there is [no topography, versus if it falls in Pennsylvania, where you have mountains,” says Brennan. In the mountains, the rain will quickly run downhill, potentially triggering a flash flood, whereas the water will spread out more slowly where there is less topography.

There’s a common tendency to assume a single piece of data about the storm is more indicative of the level of potential destruction than it is. For instance, people often assume that the Saffir Simpson Wind Scale, which categorizes hurricanes on a scale of 1-5 based on wind speed, is a measure of the total risk posed by the storm. But just looking at wind speed offers a very incomplete picture of the storm’s potential for destruction. A Category 2 storm, like Hurricane Sally, for instance, can still unleash an incredible amount of rain, which can in turn cause destructive flash flooding that may be more dangerous than the wind itself.

There have been some attempts to develop a metric that offers a more complete understanding. The Integrated Kinetic Energy, or IKE, metric looks primarily at hurricane size, which can better capture the destruction to land and buildings.”It makes a lot of sense given that as the size increases, the tropical storm endangers a larger span of the coastline,” says Vasu Misra, associate professor of meteorology in the Department of Earth, Ocean and Atmospheric Science at Florida State University.

Misra also built on this with another metric, known as the Track Integrated Kinetic Energy metric, which looks at the IKE metric over the entire lifespan of the storm. Misra doesn’t envision this replacing the Saffir Simpson Wind Scale, given its overall useful legacy, but as offering more information on the potential destructiveness of a storm.

Ultimately, though, any single metric will alway fall short of conveying the total risk of the storm. “It is important to highlight the fact that no storm is like another. The categories, the size, the wind speed does not matter because each storm is going to have its own characteristics,” says Astrid Caldas, a senior climate scientist with the Climate & Energy program at the Union of Concerned Scientists. As climate change leads to more intense—and likely slower, more meandering, erratic storms,—it can be harder to draw a comparison between the storms of the present and of the past. Therefore, a variety of tools and metrics will be necessary to capture the full, unique picture of each storm.

Part of the challenge, then, becomes finding the tools that can tangibly convey the risks and potential impacts of a storm, including as the storm changes over time. “Risk can feel very abstract,” says Gina Eosco, a social scientist focused on communicating hurricane risk at NOAA’s Office of Weather and Air Quality. “If [the hurricane is] over the ocean, it’s very difficult to look at that satellite image and understand how is that going to affect me, right?” That’s why NOAA has recently been integrating social science into its development of products, such storm surge maps to show exactly which parts of the coast might get hit.

As sea-level rises, local storm surge risk will become especially important to understand. Ideally, it would be possible to create maps that would allow users to see the storm surge risk posed to their individual homes. But meteorologists can’t yet get that granulated with the data available. “It would be misleading for us to allow someone to zoom at the level, says Eosco. “Conversely, though, if we produced data that was too pixelated on the graphic, the issue we learned in focus groups is that the graphic doesn’t look as credible.” So, NOAA ended up settling on a zoom level somewhere in the middle to convey accuracy and credibility.

Other products could potentially use an upgrade to account for the way people perceive information. For instance, “the cone of uncertainty”—the wavering cone TV meteorologists often point to when tracking a storm—is often thought to represent the area of impact. Instead, Eosco says that the cone represents a probability: “Very simply what that cone of uncertainty represents is that two out of three times the center of circulation will remain within the cone.” To address this misunderstanding, Eosco suggests that we give the cone an enhancement, or even find a new way to visualize this information.

Uncertainty and evolving risk can be especially hard to convey. Hurricane risk shifts over time as the storm travels, yet people have a tendency known as “anchoring” to latch onto the first information they receive about a storm. One way NOAA addresses this, Brennan explains, is to reemphasize that we’re going to come back and check to see how the forecast changes over the coming days.

Though meteorologists are striving to communicate better, there are some things you can do as an individual to better prepare for a hurricane. For one, Brennan says you should look up if you live in a storm surge evacuation area, which most localities have available online. If so, you should be looking out for information on being asked to evacuate. Secondly, you can find out how vulnerable your home is to wind by establishing a few basic things about your house: Do you live in a mobile home? Do you have a framed home? Do you have shutters? What are the local building regulations for wind, and is your home up to code? All of these considerations can help you know whether to evacuate. Then, when the storm is approaching, you should pay attention to local emergency managers, government officials, local media, and your local weather forecast.

Effective communication is one critical piece to helping people adapt to a world of worsening hurricanes. Astrid Caldas, of the Union of Concerned Scientists, notes that even the best communication can only go so far, especially if people are not in a position to evacuate. Along with ensuring people are aware of the risk, Caldas says that local authorities need to make sure that people in an at-risk area are “given the resources so that they can evacuate, come back, and go back to their lives as soon as possible.” After all, what if you hear the language of “unsurvivable,” but still can’t afford to leave?