Hurricane season is a huge risk for many facilities that care for the elderly. 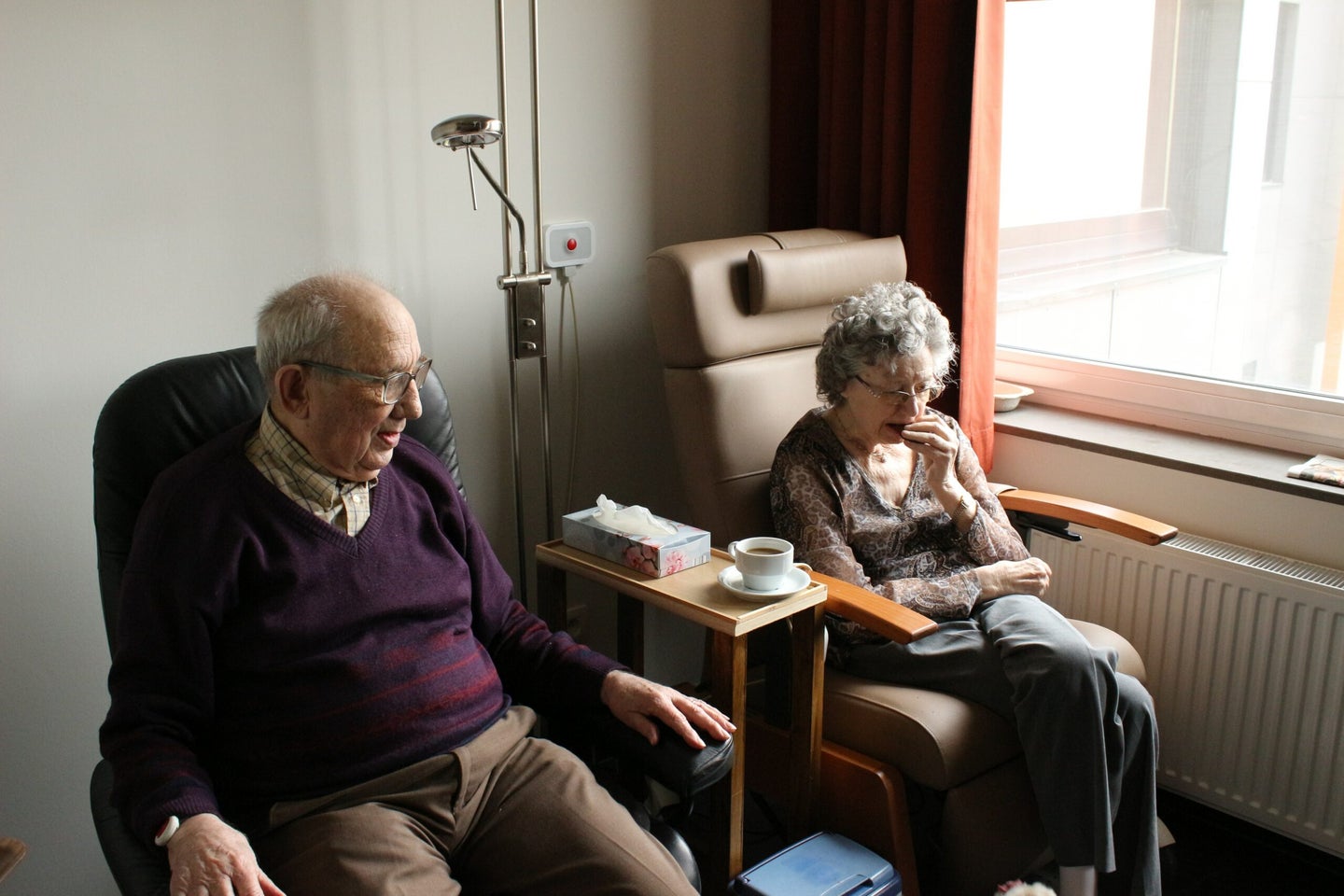 Soon after Hurricane Irma barreled up the length of Florida’s coast in 2017, temperatures began rising at the Rehabilitation Center at Hollywood Hills, a nursing home located about 20 miles north of Miami. The storm had knocked out the air conditioning, and the facility’s backup generator didn’t have the capacity to restore cooling. Nursing home staff used spot coolers in an attempt to quell the sweltering Florida heat, but did not call 911 until patients were “suffering respiratory distress, and in some cases dying,” reported the New York Times. In the end, after three days without power, 12 residents died of heatstroke, which occurs when the body temperature rises above 104°F.

This wasn’t the first time nursing home residents died from sweltering heat in the aftermath of a hurricane. After a generator at the Lafon Nursing Facility of the Holy Family stopped working from Hurricane Katrina’s floodwaters, 22 residents perished in the deadly heat. Even if the generator was working, it wasn’t connected to the air conditioning, according to a court record. “[Both nursing homes] are places where there was really no morbidity and mortality from the storm itself,” says David Dosa, a geriatrician and associate professor at Brown University. “It was all subsequent to the storm and subsequent to the loss of power that all of a sudden you had people starting to die.”

Despite these tragedies, there is no federal requirement for nursing homes to have backup generators capable of restoring power to the air conditioning. While the Center for Medicare & Medicaid Services (CMS) requires that nursing homes have “alternate sources of energy to maintain temperatures to protect resident health and safety and for the safe and sanitary storage of provisions,” the regulations stop short of more specifics. It’s up to each facility to determine whether this power source needs to be capable of restoring power to the whole building, including the air conditioning, according to clarifying guidelines on this rule.

And the lack of specificity can be challenging for both nursing homes and CMS surveyors, responsible for inspecting facilities. “I do think it’s a big issue because the more specific a regulation is, the more likely people are to follow it,” says Lindsay Peterson, a research assistant professor in the School of Aging Studies at the University of South Florida. “When [a regulation] is very general, it’s like, ‘well, what do you mean?’ It can be hard to tell whether the facility complied or not.”

A slow trickle of states and cities have begun addressing this. Prompted by the tragedy at the Rehabilitation Center of Hollywood Hills, Florida passed a law in 2018 requiring nursing homes and assisted living facilities to install a backup generator capable of powering HVAC units for 96 hours. Similarly, in 2019, New Orleans passed an ordinance that requires generators capable of powering an air conditioning unit for four days. And earlier this year, California introduced similar legislation as a way for nursing homes to more safely shelter-in-place amidst looming power-shutoffs, wildfires, and the coronavirus pandemic.

But implementing these policies is a whole other issue. Florida’s facilities struggled to comply with this requirement, including ahead of Hurricane Dorian last year. This year is looking better: as of July 27nd, 3,678 out of 3,804 facilities have an emergency power plan fully approved and implemented, according to the state’s daily updated tracker.

Nursing homes, like healthcare facilities, are uniquely dependent on power, not only for cooling and heating but also for essential medical equipment and electronic health records. Many facilities are especially vulnerable to losing access to cooling during a power outage because “air conditioning systems are often not connected to backup power,” according to the Federal Emergency Management Agency’s 2019 guidance on power outages and healthcare facilities. To back up the air conditioning requires investing in a much more powerful generator, capable of even double the power load.

If nursing homes don’t have a generator that is capable of backing up the entire facility, then the increased risks need to be planned for, says Maria Greene, a national consultant on older adults, people with disabilities and emergency preparedness and response. “Do you have plans for cooling, dehydration, moving them to another facility? You know, what’s the plan B?” says Greene. “If there were one big point to make, it would be that [nursing homes] need to have a very thorough emergency preparedness plan and they need to have a backup plan.”

There’s always a risk that a part of a plan will go wrong: for instance, even a more powerful backup generator can fail, so it can’t be relied on as the single solution to extreme heat.

As the climate crisis worsens, so too will the risk of extreme heat, especially for the elderly. There are a number of physiological factors that make the elderly more at risk, including that older adults tend to sweat less. “We regulate our ability to manage heat based on our ability to sweat, and that system works less in older adults,” says Dosa. Older adults are also generally more sedentary and are more likely to have other ongoing health issues, which can worsen the consequences of heat. There is also the issue of medications, like diuretics, psychiatric medications, and Parkinson’s medications, which Dosa says can impact the body’s ability to thermoregulate.

Cognitive impairments can also make it harder for the elderly to communicate when struggling with the heat, which can be challenging to identify. “What ends up happening is when people are uncomfortable, they yell and scream,” says Dosa. Yet this presentation changes when it turns from uncomfortable to medically serious. “When they start to develop heatstroke and the effects of heat, they quiet down. Somebody might look and think ‘Oh, Ms. Smith is finally settling down,” says Dosa.

Hydration is another critical issue among nursing home residents, especially those with cognitive impairments. As part of her research, Peterson has spoken to a lot of administrators of nursing homes that lost power and struggled to make sure people with dementia were staying hydrated. This can be an overlooked risk: “When someone becomes dehydrated, it can set in motion a chain of events that can lead to heart failure,” says Peterson.

Many of the same reasons that make elderly residents susceptible to extreme heat also make them more vulnerable to evacuating. “Without power, facilities may require evacuation, and evacuation carries significant dangers for specific populations such as those with access and functional needs,” states FEMA’s 2019 guidance. This year, the coronavirus adds another layer of risk to evacuating. All of these dangers may lead nursing homes to decide that sheltering-in-place during a hurricane is safer, which makes having a back-up cooling source all the more essential.

Outside of nursing homes, extreme heat is also a growing public health threat, which can worsen during power outages and hurricanes. As the leading cause of death related to the weather, according to the National Weather Service, it is hard to overstate the health risks it poses. Along with the elderly, low-income people of color, people who are chronically ill, and people who can’t afford the cost of electricity are also especially at risk of extreme heat. In New York City, 80 percent of people who die of heatstroke do so due to lack of air conditioning.

States and cities also need to plan for this risk and how to communicate it. Sonal Jessel, the policy and advocacy coordinator for WE ACT for Environmental Justice, notes that many people they’ve spoken with weren’t aware of, or didn’t know how to access New York City’s emergency preparedness resources for extreme heat. “So, that points to a breakdown in communication,” says Jessel. “The way that the city has been advertising this information is not reaching the most vulnerable populations that they should.”

Jessel also notes the need for more community-based outreach, like knocking on doors, to directly let people know about the location of cooling centers and other resources. “A lot of folks, especially older adults, are not computer savvy or might not have regular access to the internet,” says Jessel. “So expecting them to go online on a map to find where the cooling centers are is really a lot to ask.”

While it’s clear that nursing homes, states, and cities all have to start thinking more seriously about extreme heat, there’s one silver lining: we already know a lot of ways to keep people safe. Relatively simple measures, like knocking on doors or installing a more powerful backup generator, can prevent deaths. And that’s all the more important in an increasingly hot world where growing older has a whole new slew of risks.