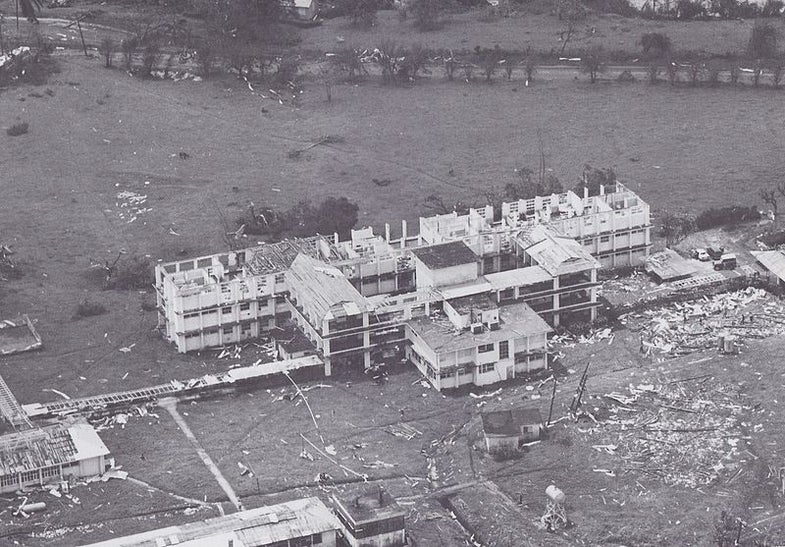 The last thing hospital workers want to do in the midst of a natural disaster is evacuate. While staying in place is often dangerous—just last year, 14 elderly residents of a Florida nursing home died after due to power outages during Hurricane Irma—transporting patients can be just as troublesome.

Medication schedules, nutrition plans, and essential services like dialysis are often upended. By the time a storm reaches its full strength, it’s often too late to evacuate, as the labor-intensive process requires ambulances, accessible roads, and neighboring facilities capable of accommodating displaced patients. And even when it works, closing up shop leaves anyone seeking additional care destitute.

That’s why hospitals go to great lengths to prepare for all manner of seemingly-unthinkable scenarios, with copious plans and regular rehearsals. It’s also why they’re relying on architects and designers to ensure new buildings are designed with disaster in mind. “Traditionally, we’ve been designing on the assumption that weather is normal and follows usual patterns,” says Mike Cavanaugh, who leads sustainability efforts at Cannon Design. “But if the last few years have taught us anything, it’s that unpredictability is the new normal.”

To cope, many hospitals are pursuing a holy grail of climate resilience, which is defined by the Resilient Design Institute as “the capacity to adapt to changing conditions and to maintain or regain functionality and vitality in the face of stress or disturbance.” Using site-specific climate models and cutting-edge engineering techniques, architects are trying to get ahead of sea level rise, inland flooding, wildfires, extreme temperatures, and drought.

For most of the year, the boomerang-shaped island of Nantucket has fewer than 11,000 residents. But “on a good summer day,” John Messervy says, that population can swell to more than 50,000. Tourists from the mainland flood into the so-called summer colony, which lies 10 nautical leagues off the southern coast of Massachusetts, on ferries from Cape Cod’s crooked hook and puddle-jumping jets from New York City.

The motivation for these sun-baked escapades is clear: Picket fences line Nantucket’s sandy dunes. Picturesque lighthouses stand guard over the Atlantic. And tucked around every corner are houses clad in iconic silvered shingles. But for Messervy, the island’s best attributes looked less like an Instagram opportunity than a weathered Rubik’s cube. As the facilities planning director for Partners Healthcare, he’s the person responsible for construction of the new Nantucket Cottage Hospital, the main source of medical care on an isolated, vulnerable island.

“Nantucket Cottage Hospital has that name because the original hospital was in a cottage,” Messervy says. Unable to find a more suitable building, the two founding physicians purchased a homesteader’s property in 1912. As the island grew, the hospital did too. In 1957, a larger facility was constructed at the hospital’s current site on Prospect Street, in the heart of Nantucket’s island-wide historic district. Within a decade, a new wing was added. And there it stayed.

For almost half a century, this facility was enough to serve the island’s permanent residents and any visitors in need of urgent care. It might still be enough to serve them, if it weren’t for the creeping advancement of climate change, which threatens the safety of patients and providers in hospitals across the country.

“It’s very vulnerable, being 30 miles out in the ocean,” Messervy says. When helicopters can’t fly and boats can’t brave the storm, residents are left with no other options for care. That’s why, in 2013, Partners Healthcare conducted an evaluation of its existing site and facilities along the eastern seaboard. The company concluded a new hospital was needed if Partners Healthcare was to continue serving Nantucket residents “irrespective of what the weather is,” Messervy says. With just 14 beds, the new Nantucket Cottage Hospital isn’t much bigger than its predecessor. But when it opens, it’ll be one of a growing number of hospitals designed to withstand floods, Category 5 hurricane winds, and even disruptions to the shared energy grid.

In Nantucket, many of the most utilitarian features are obscured by aesthetically-pleasing details. Parapets up high help the new building blend in with its historic surroundings, but they also obscure boilers and backup generators that are bolted to the roof, far away from ruinous waves. And, Messervy says, “behind the shingles is a very robust weather protection system.” It may look like its humble neighbors, but the hospital is built to meet the comprehensive building code of Miami-Dade County, one of the most hurricane-battered regions of the world. There is no basement. Walls are double-hulled; many low-level surfaces cast from concrete; and windows are designated blast-resistant and designed to resist strong winds and swirling debris. And, wherever possible, there is redundancy. (There will, for example, be three kinds of phones on site: analog, digital, and satellite, according to the Cape Cod Times.)

Not every facility has the same needs, but the same problem-solving approach applies wherever extreme weather encroaches. “Houston itself is very flat,” says Jill Pearsall of Texas Children’s Hospital, another Cannon Design site. “The drainage is not fast.” That’s why the children’s hospital and a few of its fellow 50-plus facilities at the Texas Medical Center have invested in enormous flood doors, installed in the tunnels that connect many of the institutions together. “It’s not exciting as you think,” Pearsall says of batting down the hatch. “It’s literally like taking a door stop off a door, closing the door, and latching the door. It’s just a really big door.” But, she admits, it makes all the difference when water is threatening to pour in.

In other communities, where disastrous storms aren’t the norm, smaller strategies can help fortify hospitals against subtler threats. In the desert, extra generators may be necessary to ensure a power outage doesn’t bring life-saving air conditioners to a rumbling halt. Strategic shading can also help, whether its artificial like brise soleil installations, or more natural like heat-busting green roofs. In colder climes, healthcare facilities might do well to adopt extra insulation and double-paned windows. Everywhere, experts say, redundancy and relentless preparation are key.

No strategy is full-proof, but done well, these structures might put an end to many hospital evacuations. “All of these projects are kind of a test,” says Messervy. “We don’t know how successful we’ve been until the building actually confronts a weather event of the magnitude that it was designed to.”