5 famous environmental disasters where humans and nature healed together

The two seemingly opposing forces can form a dynamic duo in times of crisis. 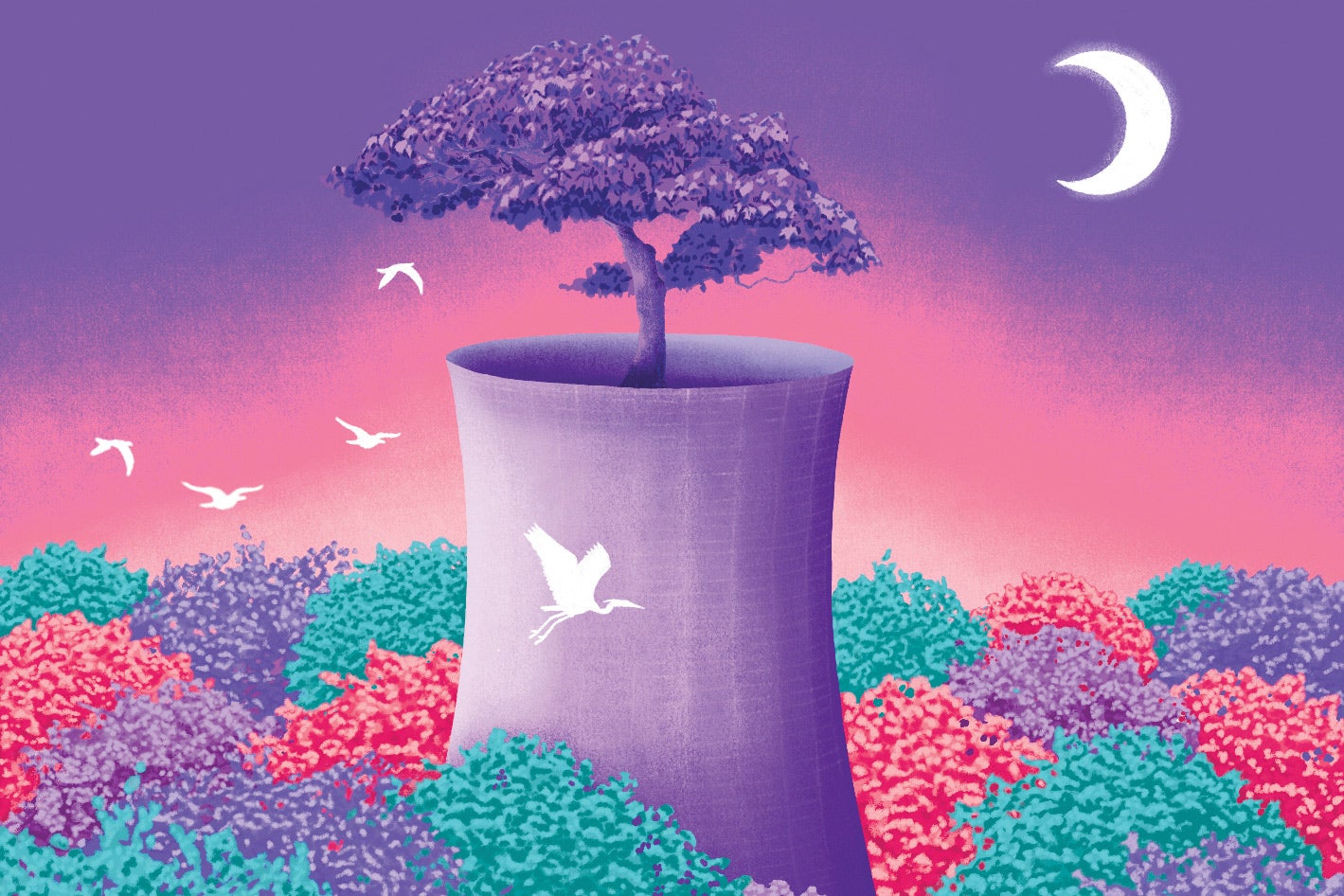 In the sliver of time since the Industrial Revolution, human enterprise has turned disastrous, ramping up extinctions, causing nuclear meltdowns, and altering the atmosphere that’s kept Earth’s climate stable for more than 10,000 years. Nature, to its credit, always tries to claw back, like a fire-resistant seed sprouting to life after the flames. But in many cases, the damage we’ve wrought runs too deep for an organic fix.

There is hope, however. By putting our ingenuity and resources toward science-based restoration efforts, we can complement nature’s ability to adapt—and even boost it further. The five catastrophes on the following pages show it takes patience (and more than a little humility) to play Earth’s sidekick. But minding cues from when that symbiosis flourished in the past could be the key to keeping the planet healthy and averting even bigger upheavals.

Disaster: On March 11, 2011, 41 minutes after the strongest earthquake ever measured in Japan, the first wave of a tsunami hit the Fukushima Daiichi nuclear power plant. Over the next 96 hours, three uranium fuel cores melted down, exposing a nearly 400-square-mile swath to intense radiation. Some 16,000 people died from the combined disasters. It was the world’s worst nuclear accident after Chernobyl in Russia.

Comeback: Nuclear byproducts like cesium-137 take decades to decay into more stable elements, so humans had to do the heavy lifting. The Japanese government and the plant’s owners removed topsoil and spread potassium—which displaces radioactive particles that vegetation might otherwise draw up—across the district. Today, concrete barriers and a mile-long “ice wall” of frozen dirt largely keep the Pacific from flowing around the reactor buildings. So far, the fortress-like infrastructure is helping: Daily tests at the Fukushima Agricultural Technology Centre show that local food samples meet stringent safety standards.

Some parts of the blast site remain a haunting landscape, with abandoned café counters still strewn with open magazines. But over time, evacuees have returned, along with several animals that were already in decline. Camera traps set up by ecologists in the region have documented wild boars, raccoon dogs, and a dozen other mammal species. Birds have shown surprising resilience, too: Andrea Bonisoli Alquati, an environmental toxicologist at Cal Poly Pomona University, says that while juvenile swallow numbers were low, initial studies on nestlings reveal limited genetic damage—a potentially good sign for radioactive ecosystems elsewhere. “As human communities regenerate, barn swallows, which frequently nest on buildings, also come back,” he says. “In the wake of this disaster, you realize how connected people and nature are.”

It could take up to 200 years for Japan to fully decommission the Fukushima plant. But the costly catastrophe has already spurred countries to phase out nuclear power. Germany, for example, is on track to shut down all 17 of its facilities by 2022.

Disaster: When ecologist Kenneth Tinley flew over Mozambique’s Rift Valley in 1972, he saw abundance. By his estimate, the nearly million acres of Gorongosa National Park were home to upward of 30,000 large grazing animals, including buffalo, wildebeest, and elephants—along with hundreds of lions. But in 1977, after the African nation freed itself from close to 500 years of Portuguese rule, Mozambique erupted in civil war. The two sides wouldn’t reach a truce until 1992, by which point 1 million residents had died and combatants had slaughtered more than 90 percent of some mammal populations to feed and fund the fighters.

Comeback: The loss called for an ambitious experiment in ecological resurrection. On its own, the vast floodplain with fertile soil and abundant rainfall provided prime pasture for small grazers like waterbuck. But while some species could rebound quickly, larger wildlife like zebras and hippos needed an extra push. Although initial stewardship efforts began in 1995, in 2008 the Mozambique government and American nonprofit Carr Foundation agreed to team up on a decades-long plan—called the Gorongosa Restoration Project—to bolster biodiversity. A 15,000-acre enclosure christened the Sanctuario kept animals safe from lions and poachers, allowing them to grow their numbers before they’d get released into the park.

But helping fauna reproduce wasn’t enough. People needed a hand, too. “Recovery depends on the interaction between human and natural forces,” says Marc Stalmans, the park’s director of scientific services.

To sustain the quarter-million or so Mozambicans who live in the area, the project sets up grants for ranger and tourist guide training programs, shade-grown-coffee microenterprises, education, and medical services. All this eases pressure on the animals by providing food and health security for communities. With poaching incidents down 72 percent, Gorongosa is now a literal textbook model for balancing ecology with economy: The E.O. Wilson Biodiversity Foundation, a leader in conservation research and partner of the Carr Foundation, cites the park in science curricula to show how multipronged efforts can nurse dying landscapes back to life.

Disaster: After weeks of torrential downpour in southwest Hungary in October of 2010, a crack in the corner of a reservoir at the Ajka alumina processing plant burst, inundating 2,500-plus acres of countryside with highly alkaline red mud. Locals described the flood of sludge, a byproduct from refining bauxite rock for industrial powder, as a “mini-tsunami.” Ten people died, including one child, and 700 residents were evacuated, marking the spill as the nation’s direst ecological fiasco.

Comeback: To keep the red mud at bay, the Hungarians pitted natural elements against industrial ones. Workers dumped 11,000 tons of gypsum minerals into riverbeds filled with dangerously alkaline sludge to keep it from burning organisms. They also rinsed polluted areas with acids to neutralize the pH, removed and replaced contaminated topsoil in farming villages, and dredged bodies of water to catch any noxious debris. The entire cleanup took three years and cost $127 million, a bill the small country largely footed itself.

If it weren’t for local tributaries, however, that price tag might have been much higher. The Torna Creek and Marcal River, which ultimately feed into the Black Sea, helped wash the mud into a less toxic mix of sediments. “While dilution is no real strategy for pollution management, the fact that downstream waterways around Ajka were so large meant that the spill material was diluted quite quickly,” says William Mayes, an environmental scientist from the University of Hull in England.

A decade later, local governments have rebuilt towns with flood-proofing and sustainability in mind. The plant’s legacy also continues to inform global manufacturers, who as a result are switching to an alumina-refining process with drier byproducts (and therefore less red mud). Next on their list: a completely zero-waste system.

Disaster: In 1985, British Antarctic Survey researchers discovered that the region’s level of ozone (O3), the atmospheric molecule that shields earthlings from the sun’s radiation, had plummeted 40 percent between 1977 and 1984. The depleted air formed a “hole” that stretched up to 11.6 million square miles over the South Pole by the early 2000s. The team knew that the gas varied naturally with sunspots, seasons, and latitude, but this drop-off vexed them. Experiments by chemists in California revealed that chlorine emitted from chlorofluorocarbons (CFCs), widely used in refrigerants and aerosols since the 1920s, was breaking down ozone in the stratosphere at an unprecedented rate.

Comeback: International governments acted swiftly once they saw the data from chemists and meteorologists. In 1987, nearly 200 countries united to pass the Montreal Protocol, a ban that forced manufacturers to create CFC alternatives that wouldn’t tamper with ozone. It was a level of cooperative environmental action that the world had never experienced before—and hasn’t seen since.

Once humans stemmed the flow of CFCs, the planet’s circulatory system took over. We needed the help, says Susan Strahan, an atmospheric scientist with the NASA Goddard Space Flight Center who’s spent her career studying the ozone hole. “We created these substances that are not naturally occurring,” she adds. “We can’t just go and suck them back out.” Instead, rafts of atmospheric wind deliver fresh ozone from the tropics, where it naturally forms, to the poles. As a result of our drop in emissions and this heavenly circulation, the concentration of O3 has spiked, causing the “hole” to shrink to 3.9 million square miles in 2019.

Still, the combined power of the CFC ban and the self-healing atmosphere might not prevail forever. Replacement chemicals, such as the tetrafluoroethane gas now used in car air conditioners, have been found to contribute to global warming. To counter, companies are developing new ozone- and climate-friendly formulas, hinting at the possibility of a future where we can cool our roasting planet and still preserve our protection from the sun’s rays.

Disaster: Two days before the 40th anniversary of Earth Day, an explosion on the Deepwater Horizon rig triggered the worst marine oil spill in American history. It took nearly three months from the date, April 20, 2010, for the energy corporation BP to cap the undersea wellhead. By then, at least 134 million gallons of fuel had poured into the Gulf of Mexico. The shiny waves touched 1,300 coastal miles, devastating working beachside communities and killing up to 102,000 birds.

Comeback: Because the leak originated about 50 miles offshore, ocean waters broke down some of the crude oil before it hit land. Meanwhile, the more volatile chemicals like butane evaporated quickly. Recent estimates published by the Bureau of Ocean Energy Management hold that up to 40 percent of the spill dispersed in these ways. Hydrocarbon-degrading microbes also assisted by having a feeding frenzy near the wellspring.

“It points to nature’s resilience,” says Christopher Reddy, a marine chemist at the Woods Hole Oceanographic Institution, who thinks the spill’s ultimate impact wasn’t as bad as feared.

As those natural processes unfolded, cleanup crews fueled up on Waffle House eggs before tackling the slick with sand-cleaning trucks, oil-corroding chemicals, and booms. A multibillion-dollar settlement fund from BP continues to bankroll the recovery. One of the direct recipients is GulfCorps, a Nature Conservancy and National Oceanic and Atmospheric Administration (NOAA) job program that trains local youth in restoration.

The spill also put a years-long delay on big offshore drilling projects. To corral future leaks at rig sites, NOAA has built a satellite mapping program that can track how oil moves on open water. This technology, coupled with shored-up sandbars and wetlands that barricade businesses and homes, should make the region stronger in the face of disasters, old and new.