A new material developed at Harvard and MIT adds a distinctly cybernetic element to the science of tissue engineering. The... 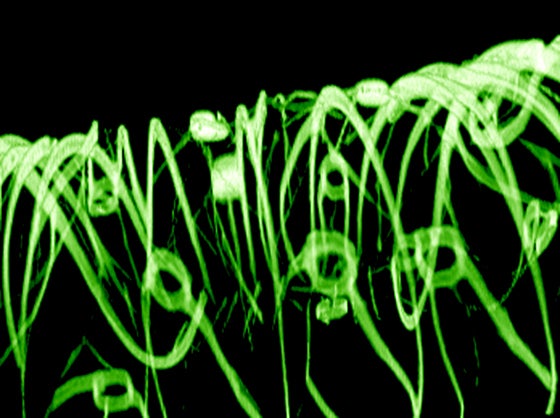 A new material developed at Harvard and MIT adds a distinctly cybernetic element to the science of tissue engineering. The 3-D mesh of transistors and cells, which can support tissue growth while monitoring its health and progress, could even be a step toward prosthetic devices that connect directly to the nervous system.

Tissue scaffolds have been used successfully for some time to coax cells to grow, and they can even be used to grow artificial blood vessels. Previous research has tried to incorporate electronic sensors into these scaffolds, but they have been limited to two-dimensional flat planes, with cells growing on top of transistors or electrodes.

This time, scientists led by MIT professor Robert Langer and Harvard chemistry professor Charles Lieber set out to build a 3-D scaffold that more closely resembles real tissue. The team wanted to build sensors that would let them monitor how the tissue responds to drugs in real time.

The scaffold is made from epoxy embedded with silicon nanowires, which can carry electrical signals to and from the cells. The mesh was folded or rolled into a structure resembling either tissue or vasculature. The nanowires can detect voltages lower than one-thousandth of a watt, according to MIT News — that’s the level of electricity that might be seen in a cell. The mesh was porous enough for the team to seed it with cells and coax them to grow. The system thereby supports cell growth while simultaneously monitoring it.

In their study, the authors used the scaffold to grow cardiac, neural and muscle tissue. They monitored heart tissue cell’s response to a stimulant called noradrenalin, which increases heart rate. Langer, who has published several groundbreaking studies on artificial tissue, nanowires and heart cells, said this could be a step toward engineered muscle: “It brings us one step closer to someday creating a tissue-engineered heart, and it shows how novel nanomaterials can play a role in this field,” he said.

Lieber said the system will allow scientists to work with tissue without disturbing it. “Ultimately, this is about merging tissue with electronics in a way that it becomes difficult to determine where the tissue ends and the electronics begin,” he said in a statement.

The study appears this week in Nature Materials.