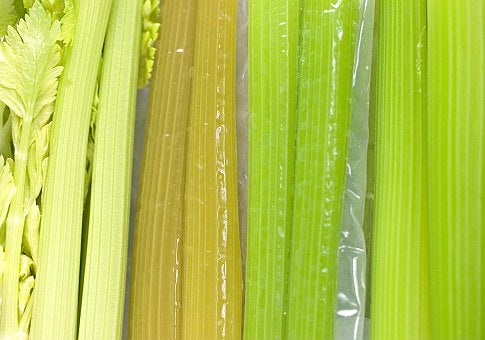 Two of the main challenges when cooking green vegetables are retaining the verdant hues and emphasizing the fresh flavors on the palate. The battle against browning is often fought by blanching, which has the unfortunate effect of leaching much of the vegetable’s flavor into the cooking water. We were looking for a better way.

First we needed to understand what was causing the browning to take place during the cooking process. All plants contain chlorophyll, which is the molecule that allows them to absorb sunlight and then use its energy to transform carbon dioxide and water into sugar and oxygen, a process known as photosynthesis. The first pigment change occurs when the gases between the cell walls expand, collapsing the cell walls and allowing the chlorophyll pigment to become more clearly visible. This accounts for the bright color that occurs when green vegetables are dropped into an environment of intense heat or cold or are subjected to the pressure and compression of a vacuum chamber.

The second change occurs because chlorophyll contains an atom of magnesium at its center. When the vegetables are heated for longer periods of time or exposed to acid, the magnesium is removed from the center of the molecule and replaced with an atom of hydrogen, which in turn changes the chlorophyll a and chlorophyll b into pheophytin a and pheophytin b. This transformation changes the pigment from a bright green to more of a grayish-green color.

For the purposes of our experiment, sous vide cooking is defined as cooking under a vacuum. We took four stalks of celery from the same bunch. The first two were simply cooked in ample amounts of boiling salted water for four minutes, shocked in an ice bath, and patted dry. The second two pieces of celery were seasoned lightly with salt, sealed in a bag using a vacuum pressure chamber, dropped into boiling water and cooked for four minutes, and then shocked in an ice bath. Once the celery was cool, we simply opened the bag and removed the cooked vegetable. Then we did a side-by-side comparison of the results. 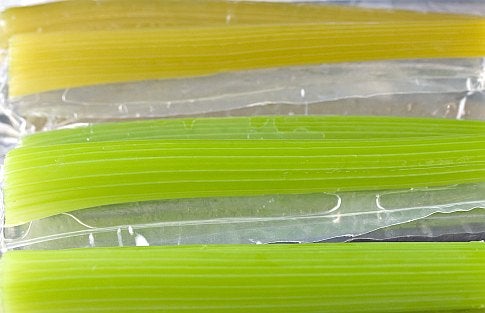 The end results were striking. Both versions of celery retained a bright vibrant green color, although the sous vide celery seemed a shade brighter. The traditionally blanched celery stalks were tender, supple, and toothsome. Their sous vide counterparts, which cooked for an equal amount of time, were similar in texture, although they definitely had a bit more snap and crunch, similar to al dente pasta. This would be due to the insulating characteristics of the vacuum bag during the time spent in the boiling water. The traditionally blanched stalks were lightly seasoned and had a sweet celery flavor. On the other hand, the stalks cooked sous vide had a much more intense celery flavor, especially when compared to the other ones. Although the results involving texture and color were close to one another, in the taste category there was simply no comparison. The sous vide vegetable was head and shoulders above the blanched version.

We know that chlorophyll breaks down over time. In vegetables cooked for short periods of time the chlorophyll is preserved. In fact, cooking green vegetables for under five minutes produces the most vibrant retention of chlorophyll. The magnesium shift, facilitated by the vegetables acids, takes place over an extended time period in a hot environment. This shift is what produces the color transformation from vibrant green to olive gray.

In conclusion, it seems clear that cooking your green vegetables sous vide for short periods of time in boiling water is a much more efficient cooking method than blanching the same vegetables in boiling water. When cooking sous vide, the pot of boiling water can remain covered to avoid evaporation and retain temperature, the water can be reused, and the minerals and nutrients are preserved in the bag along with the vegetable’s flavor. In addition to all that, it even makes washing the pot a bit easier to deal with. We will actually be improving the consistency of our vegetable cookery while increasing the flavor, all in a functional way.