Yes, astronauts are baking cookies in space. No, they can’t eat them. 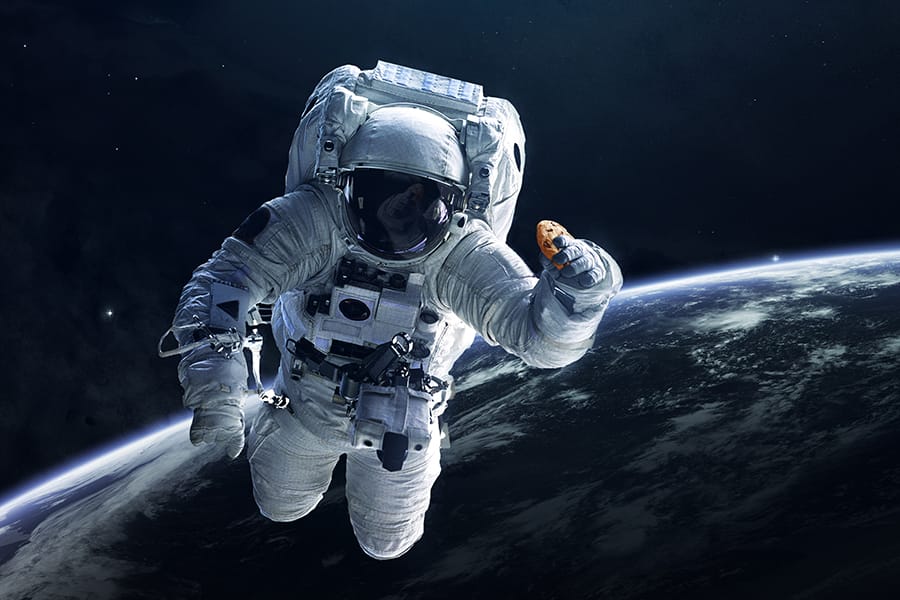 Mike Massimino is best known for being the first person to tweet from space, but he seems nearly as proud as another superlative from his time in NASA’s shuttle program: he actually gained weight eating astronaut food.

“I really liked the mac and cheese,” he told a group of reporters gathered at Orwashers bakery in Manhattan’s Upper West Side in June. Surrounded by such fare as gourmet pigs-in-a-blanket and elegantly displayed charcuterie, he still had high praise for NASA staples such as reconstituted shrimp cocktail and gooey rice dishes designed to stick to spoons in zero gravity. “Are we getting any of the mac and cheese today?” he asked, appearing genuinely disappointed when the event hosts just chuckled. “Well,” he said with a shrug, “I liked it.”

Massimino’s staunchly pro-space-food position is notable precisely because of the cuisine’s many shortcomings: most meals are dehydrated in pouches for maximum shelf-life, menus favor gummy textures to avoid floating spills and crumbs, and options are limited, to name just a few of them.

That makes him a somewhat unlikely spokesperson for an upcoming initiative from DoubleTree by Hilton. To improve astronauts’ dietary options and herald the start of new hospitality ventures in space, the branded task force recently announced it’ll be baking the first-ever low-orbit cookie. Zero G Kitchen, a rather whimsical company founded by husband and wife team Ian and Jordana Fichtenbaum, has designed an oven made to slot right into the International Space Station’s existing suite of experimental instruments. With the help of NanoRacks, a company that creates and hosts research equipment on the ISS, they’ve built their first space stove and plan to send it into orbit sometime in 2019. DoubleTree by Hilton is chipping in and offering up their own cookie recipe for the appliance’s debut experiments.

Baking in space sounds kind of silly at first—and sounds even sillier when you realize just how many hurdles a baker has to clear to make it happen. One does not simply bake a cookie in space. The results of this upcoming experiment may turn out to be interesting and perhaps even useful, but they certainly won’t feed any homesick astronauts.

They’re starting small, but Zero G Kitchen’s stated purpose is to eventually put a full kitchen into space, thereby allowing celestial sojourners to cook fresh meals. There’s lots of talk of the culinary needs of orbital hotels and long term missions to Mars, but the founders’ primary goal is to create a version of spaceflight that anyone can imagine enjoying. The ISS is essentially a giant lab—Ian, who works in finance and business development for Bradford Space, is well aware of this fact—but while talking to Jordana, who works in the restaurant industry, he realized a possible connection to everyday life.

“When you think about what kind of laboratory people have in their own homes, for most people it’s a kitchen,” he said. “So our idea was, let’s put something, or a collection of somethings, into space that people on Earth can relate to.”

The question of why someone would send cookie dough and an oven to space isn’t one any of the parties involved will get much deeper into. It will provide the Earthly comfort astronauts crave on longer missions, Massimino said. It’s a preview of the future of Doubletree Hotels in orbit, added representatives from Hilton. In other words, the great baking lift-off will be more about PR buzz than a direct step toward feeding hungry astronauts en route to Mars.

NASA might never bother with the logistics of fresh cookies in orbit, but it’s true that the space agency is increasingly concerned with creature comforts. “For a short period of time you can live almost anywhere,” Massimino said. “The first flight into space was only 15 minutes long, so we didn’t need to bring anything with us.” As missions get longer, he said, “you need more of these comforts, more hospitality. We call it habitability, and it’s gotten better and better.”

So will this cookie experiment serve to make astronauts happier? Not if they’re hoping for a taste, it won’t: the results of all five planned experimental bakes will go back to Earth for testing. Whether or not the results will look scrumptious enough to tempt the first space baker is anyone’s guess, because, well… no one has any idea how these cookies will hold up.

Zero G Kitchen and NanoRacks haven’t totally ignored the unique challenges of baking in space, but they don’t really know how to counteract them. The most obvious issue is that everything floats in zero gravity, and you can’t exactly strap a cookie down to an oven. The new oven comes as close to that as possible; special pouches slotted into the heating apparatus will cradle each cookie in place. But even if the oven manages to bake evenly while the dough is in free-fall, the results remain up in the air. Folks at NanoRacks have a bit of a betting pool going on what shape the cookies will be (spherical is a popular choice) and Massimino thinks the absence of gravity will increase rise to make a puffier dessert.

At the very least, it seems somewhat absurd to assume the cooking time and temperature will be the same, or that the texture will make for a palatable treat. Humans on Earth accommodate gravity quite literally with every step we take. One of the biggest benefits of running experiments on the ISS is the ability to remove that variable; we can only assume it’s going to radically change the way we craft our recipes.

Despite all the hype, those involved in the space cookie endeavor realize their first batch (or five) is doomed to fail. But Mary Murphy, Senior Internal Payloads Manager at NanoRacks, says shooting for the stars with an untweaked recipe seemed like the smartest choice.

“This is the first time we’re trying this, so the fundamental question is how it will be different,” she said. The teams could try to figure out how conditions on the ISS will affect the cookie and adjust their ingredients accordingly. But if those cookies were less than perfect, how would they know which change to blame? “In any experiment, you want to try to change just one variable,” Murphy said. “Perhaps once we have these results, we can ask how we might develop a truly zero-g version of the cookie.”

Members of this cosmic cookie coalition wouldn’t say how much dough it’ll take to get the experiment to space, or who’s covering the cost. NanoRacks lists the cost of deployment for similar systems at $35,000 and up, which doesn’t include the return trip for any non-digital experimental results (i.e. cookies). But even if costs keep them from honing in on the perfect extraterrestrial treat with repeat tests, the oven could find use in other foodie experiments—or even entirely different purposes.

Murphy suggests the apparatus could come in handy with 3-D printed tools. Many space-bound objects undergo baking on Earth to keep them from off-gassing once they’re in orbit, where shed molecules can put astronauts or hardware at risk. Now that there’s a heating element onboard the ISS, Murphy said, passengers might be able to print and cure tools on demand. So yes: it’s quite possible that something as seemingly silly as a space-bound cookie could provide serious technological insight. But will it ever provide dessert? Debatable.