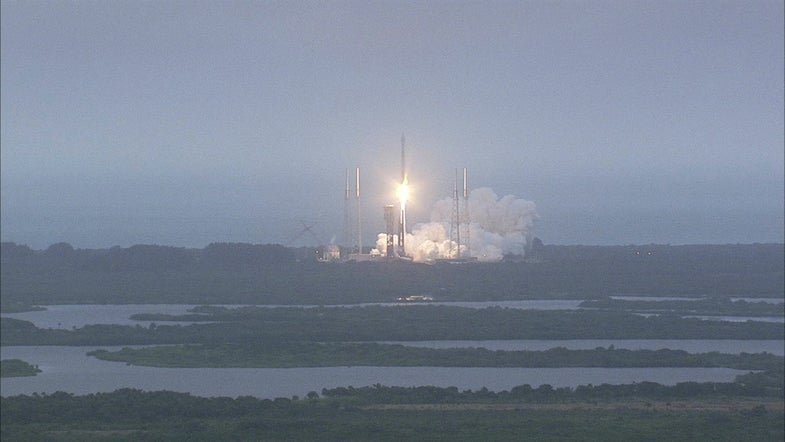 Fresh supplies are finally on their way to the International Space Station, after Orbital ATK’s launch was scrubbed 3 times due to inclement weather. The mission got off the ground Sunday at 4:44 p.m. Eastern, and will dock with the station on Wednesday morning.

Although there were no concerns about supplies onboard the ISS (its current stock should hold out for several more months), the launch was important because it’s Orbital’s first since its rocket exploded shortly after takeoff in October 2014. No one was onboard at the time, but the explosion destroyed 5,000 pounds worth of space station supplies, damaged the launch pad, and left Orbital grounded for more than a year.

One of the AJ-26 engines inside Orbital’s Antares rocket was at fault. Since the accident, the company has been working on replacing the rocket’s AJ-26 engines with Russian-made RD-181s.

Although the new-and-hopefully-improved Antares isn’t ready to launch yet, Orbital has a contract with NASA to deliver cargo to the International Space Station. So, while its rocket is in the shop, Orbital is hitching a ride on United Launch Alliance’s Atlas V rockets. (ULA is a conglomerate formed by Boeing and Lockheed Martin.)

The launch was a first for Orbital’s upgraded Cygnus spacecraft, which is now capable of carrying 53 percent more weight to the ISS. The mission carried 7,700 pounds of cargo, including food, clothing, spare parts, science experiments, and a Microsoft HoloLens, so that astronauts can test out augmented reality in space.

NASA attempted to send the HoloLens to the ISS before, but that one burned up in a SpaceX explosion. (It hasn’t been a good couple of years for American spaceflight, to say the least.)

A NASA press release has more on the science experiments that will launch this week:

The new-and-improved Cygnus craft hang out at the ISS for a month or so as astronauts fill it with about 3,000 pounds of trash. Then it and its smelly cargo will burn up in the Earth’s atmosphere.