Watch This Salamander Robot Slither Like The Real Thing 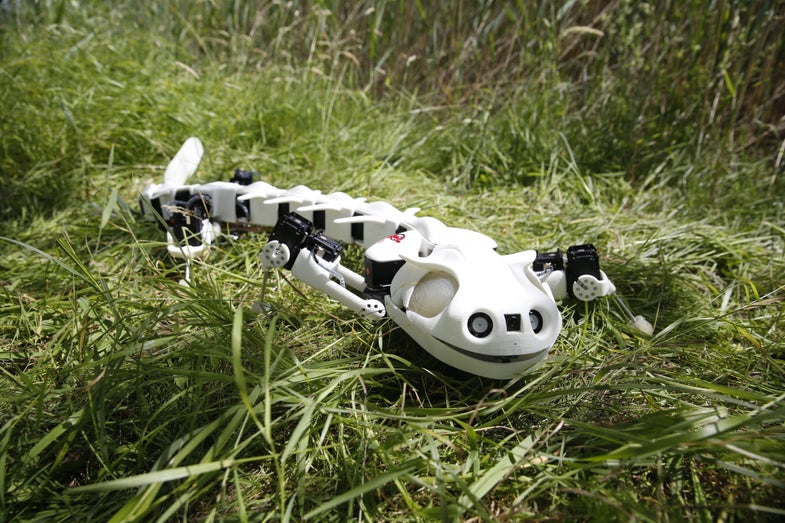 As one of the first animals to walk on land, a group of Swiss researchers decided to make a robot salamander. Pleurobot, the robotic salamander, wiggles and sways, and the researchers hope that it will further their study of the evolution of locomotion. Find out more and watch the video here. Hillary Sanctuary / EPFL
SHARE

Salamanders were among the first creatures to walk on land. The wriggly amphibians, with stubby legs and moist bodies, are adept at swimming and just okay at crawling. In their defense, hardly anything else made the transition from water to land, so when they arrived, few could witness their awkward gangly steps, but many creatures that evolved afterwards adapted from the salamander’s humble origins.

To better grasp the evolution of locomotion, researchers at Switzerland’s Ecole Polytechnique Fédérale de Lausanne (EPFL) built a salamander robot from 3D printed parts. And just for kicks, they made it look like a skeleton.

Here we can see how the robomander’s walk is like that of its living inspiration.

Specifically, the researchers are looking at the why spinal cord stimulation changes the creature’s movement. Both the robot and real salamanders can walk, run, or swim. In living creatures, the intensity of electrical stimulation of the spine changes walking to a run, or running to a swimming motion in water.