They’re designed by AI and made of frog cells. 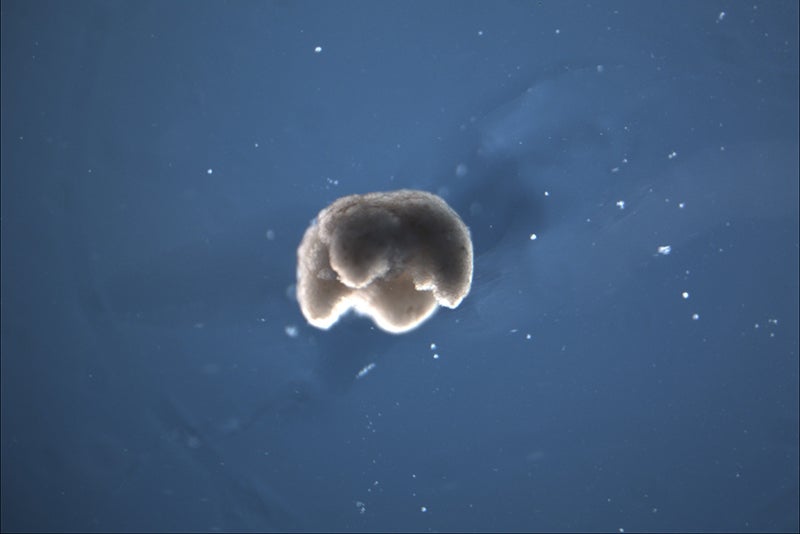 An entirely new being is swimming into the annals of science—a living robot designed by artificial intelligence.

In a paper published earlier this week, computer scientists from the University of Vermont and biophysicists at Tufts University describe using AI to design a totally new organism made of frog stem cells—and actually creating a tiny, living robot based on those designs. Their primary goal is to use the cutting-edge critters to better understand how cells of all sorts communicate with one another.

These “xenobots” can’t eat, can’t reproduce, and only live for about a week—so Frankenfrog invasions should not be high on your list of concerns. What they can do is walk, swim, push or carry objects, and work together in groups. Those are substantial accomplishments for first-of-their-kind robots made out of a mishmash of cells.

To accomplish this, the University of Vermont team came up with an AI capable of running tens of thousands of simulations on how differently-shaped combinations of skin cells and heart cells would behave if they were built in the real world. The Tufts team used some of those predictions to build a functional organism out of stem cells taken from frog embryos.

The team harvests those cells by trimming off a peripheral region of the embryo, which would normally develop into skin or heart muscle later in the growth process. They manually fragment the tissue into single cells and place them into what’s basically a mold.

It’s sort of like making Jello: All scrambled up, you might not expect these individual cells to be able to coordinate. In other words, the Jello would never go from liquid goop to a wiggly, semi-solid foodstuff. But “what they build is not just a mess,” says Tufts University biophysicist Michael Levin. “It is a functional, coherent organism.”

That organism moves based on the properties of its heart muscle cells, which are designed to contract (this is how your heart beats.) The skin cells help hold everything together, just like they do in a body, says Michigan State University microbiologist Christopher Adami, who was not involved with the study.

After they pop the xenobot out of its mold, the team manually trims it to the shape predicted by the AI design. They’ve created a recipe for a xenobot that will move around—and it produces organisms that perform the same functions every time, says Levin. Such creatures could eventually have practical applications outside the lab, like improving drug delivery.

This is just the first step. “The translation of a computer-generated organism into a biological organism is a new thing,” Adami says. But it’s not clear how long it will take for this method to yield medical technology, or even provide new insight into how cells work.

However, it’s promising. “Transferrals of robot behavior from simulation to reality are extremely difficult, and this new paper shows impressive results,” Yale University robotics engineer Rebecca Kramer-Bottiglio told Popular Science in an email. “The team’s use of living cells to achieve the simulated designs and behaviors is an especially promising indication of our future ability to generate bio-compatible robots, and soft robots that leverage the resiliency and intelligence of living tissues.”

At this point, the team is focused on primary science, not sci-fi medical possibilities. They’re working on creating recipes for xenobots that more clearly demonstrate how cells communicate with one another. We know they use methods like electricity and chemical signals to coordinate, but at present, we have no idea what they’re saying to one another, or how they decide what shapes to build.

There’s more than one way to cook up a “living robot,” and this frog isn’t the first. Other teams are using genetic engineering and different kinds of tissue generation to create cells that can perform functions other than the ones they’re designed for. The real advance here is using AI to design the xenobots, says UVM computer scientist Josh Bongard. The computer is ”basically running a trial and error process over billions and billions of xenobot designs,” he says. This research shows how effective that is for crafting a design that works in the real world.

Although it might sound like something from science fiction, humans reshape organisms all the time, and have been doing so for millennia. But the process normally takes decades, or even centuries—think about domesticated crops like corn, which don’t look much like their wild ancestors—and the exact end result is almost impossible to control.

Bongard acknowledges that creating totally new organisms raises a lot of ethical questions—even though these organisms aren’t capable of thinking or feeling as we would understand it. As technology develops, he says, we may eventually need to come up with regulations to ensure the xenobots are treated ethically.

However, “They’re not alive in the sense that you would normally think about it,” Adami notes. “These are tissues that react under stimulation.”

It remains to be seen what will happen to the bots, and what they can tell us about how cells work. What Levin is most excited about is studying how cells communicate. “The big picture here from the biology side is to understand how individual cells cooperate and how they decide what bodies to build,” says Levin. “This is really a sandbox.”

Understanding cellular communication is going to be essential to the future of the biological sciences, he says. “We’re basically where computer science was in the ‘40s, where in order to reprogram something, you had to move wires around and reprogram the hardware,” he says In this case, that means genetic engineering. “We have to move forward toward a better understanding of the software.”

To do that, however, Adami says that developing finer physical control of the cells may be necessary. At this point, the team has to physically build the xenobots, and although they’re hoping to eventually automate the process, Adami says the technology to simply 3D print such an organism is a lot way off.

“These things are embryos. They’re small. And I don’t think we have the machinery really to do this at the level you would like to do it,” Adami says.

Even in small numbers, however, the tiny beings could yield important information about how cells get themselves in formation.