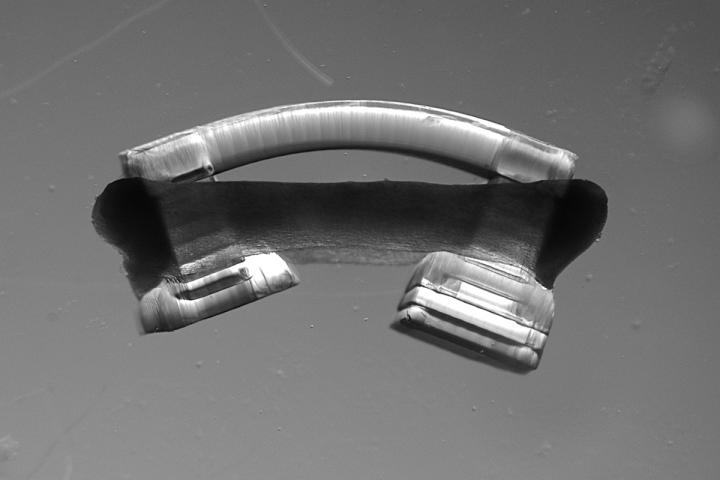 For the past few years, scientists have been experimenting with the best way to blend biological and robotic materials. Biological materials, they argue, can help robots in situations where they need to quickly adapt to changing conditions — useful for medical applications, like non-invasive drug delivery and implants with several different functions.

Now researchers from the University of Illinois at Urbana-Champaign paired engineered skeletal muscles with a 3D printed robot. When the muscle cells are exposed to light, they give the robot the power to walk, a system that is the first of its kind ever developed. The researchers published their work today in the journal PNAS.

How scientists built a muscular robot

To mimic muscles’ connection to tendons in the human body, the researchers created a 3D-printed skeletal frame that would support the cells and give them something to move.

Then, the researchers engineered the muscle cells so that they would contract in the presence of light. They grew these cells in rings of different thicknesses around the 3D-printed frame. By lengthening one side of the robot’s frame, it could display locomotion—its engineered muscle cells moving it towards a light source.

The researchers wanted to make the strongest robot possible, so they tried a number of different combinations of frames and muscle ring thicknesses, exercising them daily so that they got stronger.

The scientists eventually found that thin rings worked best in part because they allowed nutrients to enter the muscle from all sides. The researchers also measured the amount of a motor protein called myosin and using an algorithm to correlate its concentration to physical force.

“This is a much more flexible design,” said Rashid Bashir, a bioengineering professor at the University of Illinois and one of the study authors. “With the rings, we can connect any two joints or hinges on the 3D-printed skeleton. We can have multiple legs and multiple rings. With the light, we can control which direction things move. People can now use this to build higher-order systems.”

This study builds on Bashir’s previous work in which he moved a bio-bot with beating heart cells.

And though the applications for this work are exciting, it brings up ethical questions like those raised in the past. If this bot moves with contracting cells, is it alive? The researchers plan to pursue more complex bio-bots in the future, making them self-assembling or self-healing, and these questions are likely to get harder to answer as a result.