A Small Self-Aware Robot Showed Minimal Intelligence During a Test 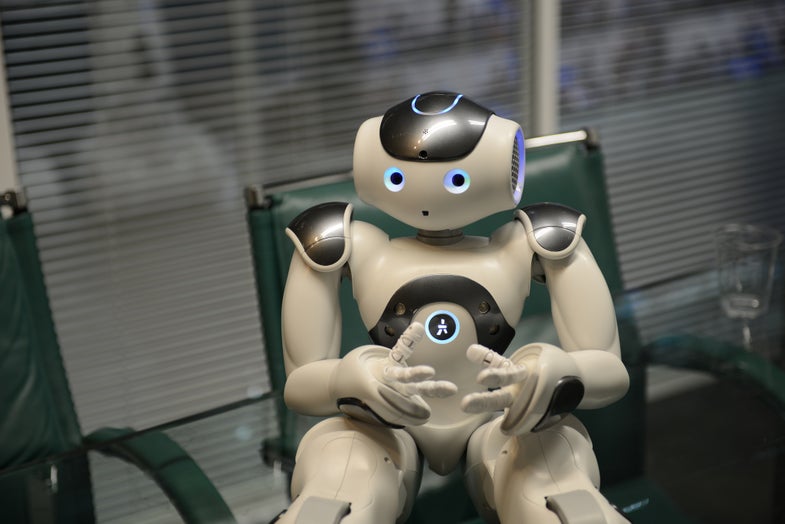 We’re a long way off from having a self-aware robot with an artificial intelligence close to what is seen in movies such as Her or Ex Machina. But for the first time, three humanoid robots showed a glimmer of self-consciousness by solving a classic philosophical problem.

The robotic trio was composed of three old Nao models, but the experiment that was conducted on them was extremely novel — and so were the results.

The robots were programmed to think that two of them had been given a “dumbing pill” that would make them unable to speak (actually just a button that silenced them). However, they didn’t know exactly which two of them had been silenced. When the robots were asked to answer which two had been given the pill, all of them tried to respond: “I don’t know.” Since only one was actually able to utter the words, the self-aware robot heard its own voice and recognized it wasn’t among the two who had been silenced. That robot then responded: “Sorry, I know now. I was able to prove that I was not given a dumbing pill.”

Not only are the Nao bots polite, the test requires them to accomplish very basic forms of self-awareness. Each robot must be able to understand the question, as well as to be able to recognize its own voice. They must also be able to infer that if they were able to speak, they weren’t one of the robots who had received the “dumbing pill.”

The test is a variation of an induction puzzle called “The King’s Wise Men.” In the puzzle’s scenario, a king decides who will be his new advisor by calling three of the wisest men to his court to participate in a contest, which he promises will be fair. He tells all three wise men that he’s putting either a white or blue hat on their heads, but the color of each hat can only be seen by the men not wearing it. The King goes on to tell the men that at least one of them is wearing a blue hat. The first wise man to figure out the color of his own hat becomes the new king’s advisor. In fact, the solution is that they’re all wearing blue hats.

Selmer Bringsjord, a professor at the Rensselaer Polytechnic Institute in New York, ran the test on the robots. He works on building artificial intelligence systems on the basis of computational logic. His work will be presented at RO-MAN, a robotics and artificial consciousness conference in Japan. The current theme of the conference, which runs from August 31 to Sept. 4, is “Interaction With Socially Embedded Robots.”

According to Bringsjord’s faculty bio, he claims that “‘armchair’ reasoning time has enabled him to deduce that the human mind will forever be superior to such machines.”

Watch a video of the test below.