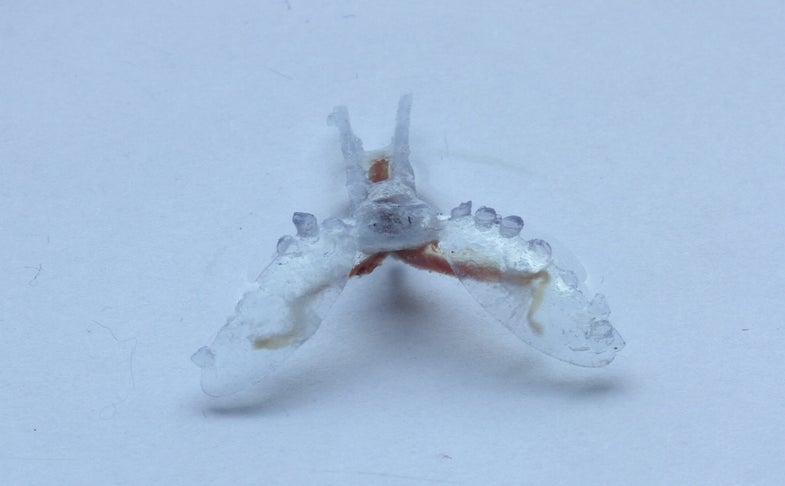 Sea slugs typically slither—a perfectly respectable way to get around—but recently a team of scientists saw additional locomotive potential in the odd-looking invertebrate. Specifically, they took a tiny muscle from the sea slug’s mouth and used it to make a robot crawl.

“We’re building a living machine—a biohybrid robot that’s not completely organic—yet,” Victoria Webster, the PhD student who is leading the research, said in a statement.

A sea slug might seem an unlikely source for robot parts. But according to the researchers, sea slugs are exceptionally tough creatures, and that toughness extends down to the cellular level. In the chilly Pacific Ocean, sea slugs endure large swings in temperature, salinity, and habitat as tides move them between deep water and shallow pools. This makes the slug’s muscles more adaptable than those of many other species in terms of the conditions in which they can operate.

The researchers started by harvesting so-called buccal muscles, from around mouths of the Aplysia californica, or sea hare—a species of sea slug. The muscle has two “arms” that the scientists attached to the body of the 3D printed polymer robot. When the muscle contracts, the bio-bot is able to pull itself along at a rate of 0.04 centimeters per minute (let’s face it: sea slugs are not speed demons).

“With the ganglia, the muscle is capable of much more complex movement, compared to using a manmade control, and it’s capable of learning,” Webster said.

The field of biohybrid robots is growing fast and has recently generated a variety of quirky projects. We recently wrote about robo-stingrays made from rat muscle cells.

One major advantage of these biohybrids, say the researchers, is that eventually they could be very cheap to produce. Then, in theory, they could be released in swarms to provide a variety of functions, such as pollution detection. And when they’ve finished their work, they could simply biodegrade.

The researchers will present their work this week at the Living Machines conference in Edinburgh, Scotland.