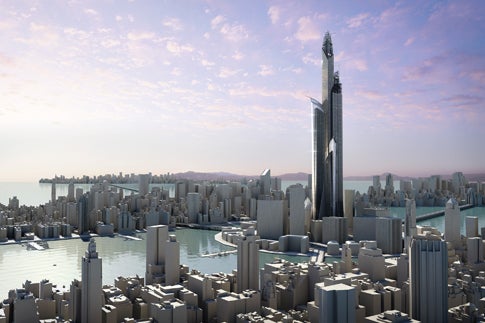 The centerpiece of Kuwait's entirely new City of Silk will be the Burj Mubarak skyscraper. Nick Kaloterakis
SHARE

The Empire State Building claimed the world’s-tallest title for four decades. Today’s record-holder, the more-than-2,300-foot Burj Dubai, will be lucky to keep it for four years. The Kuwaiti government is about to break ground on the City of Silk, a designed-from-scratch metropolis on the Tigris and Euphrates river delta with a 3,284-foot tower as its centerpiece. At that height, winds could sway a conventional skyscraper like a tree branch and turbulent vortices could shake it to smithereens.

So instead of building one shaky tower, London-based architect Eric Kuhne designed the Mubarak skyscraper as three interlocking towers, each twisting 45 degrees top to bottom to help stabilize it. The inside edges of the buildings meet in the center to form a triangular shaft through the middle. No matter which way the wind blows, two of the three towers will always brace the building.

Although the three-pronged design keeps the high-rise from swaying, it doesn’t counter the choppy winds that whip around the uppermost stories, which can cause damaging vibrations. So Kuhne is trying something never before done on a building: giving it vertical ailerons, the normally horizontal flaps on the trailing edge of aircraft wings that control rolling motion. The ailerons, which are only three to six feet wide, run the full length of each edge of the towers and mechanically adjust to redirect the changing winds around the structure and scatter the vortices, mitigating vibrations.

The Mubarak’s size is intended to accommodate Kuwait’s explosive population growth, with seven 30-story neighborhoods stacked atop one another, each with apartments, offices and hotels, and four-story “town squares” linking them. Even the height has a cultural significance, Kuhne says. “One thousand and one meters for [the classic Arabian fairy tale] One Thousand and One Nights. It’s the difference between bragging rights and telling a story.”

See more extreme engineering projects in PopSci’s look at the Future of Building!