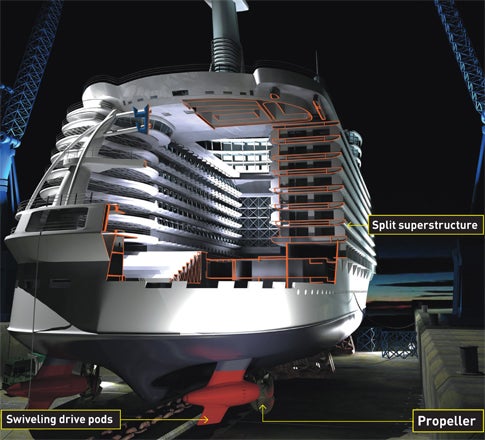 Name: Oasis of the Seas
Where: Florida
Cost: $1.2 billion
Estimated Completion: This year
The Challenge: Build an 18-story-tall superliner with more outdoor space

When the Oasis of the Seas sets sail later this year, it will claim the record for biggest passenger ship, with space for 6,300 passengers, 2,000 more than any other ship. But it will also claim the most rooms with balconies, the biggest onboard swimming pool, and the first at-sea, tree-filled, outdoor park.

Those features were possible because of the ship’s unique design. Traditionally, the top of the boat is built like one big box, with only a handful of rooms facing outward and an open deck area limited to the bow and stern. Instead, Royal Caribbean engineers widened the hull and split the box in half, erecting two six-story towers of cabins on either side, with enough space between them to fit the football-field-size park.

To maneuver this new giant, three 20-foot-tall propellers pull rather than push the boat through the water. The propellers are mounted on swiveling pods along with electric motors (powered by diesel generators in the ship) delivering the equivalent of 30,000 horsepower. This system is more efficient, because it eliminates the need for a long drive shaft, which typically creates drag under the ship. The propellers can rotate 360 degrees, so they also act as the steering system, allowing the captain to make adjustments in port of as small as one foot. “Ten years ago, we felt that 140,000 tons was as big as we could go,” says Oasis designer Harri Kulovaara. “Now that we’ve got the experience, we’ve taken a quantum leap.”

See more extreme engineering projects in PopSci’s look at the Future of Building!