Extreme Engineering: A City Beneath A City 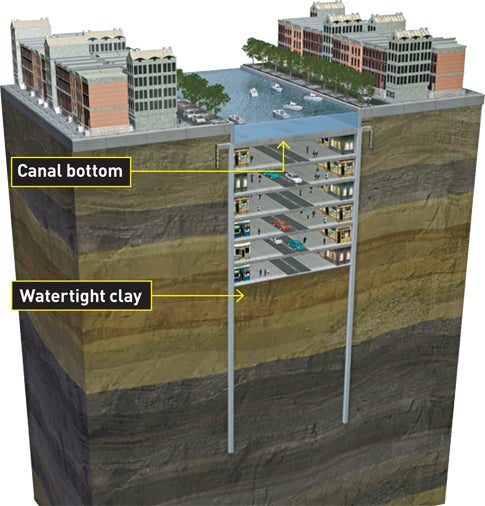 Waterlogged Amsterdam might seem an odd place to construct a sprawling underground city. But the same team of Dutch engineers and architects building Amsterdam’s subways believes it is ideal. That’s because it sits about 100 feet above a thick layer of watertight clay. Confine the new city to the space between this clay and the sealed canal floors, and you’ve got a nearly premade foundation and roof. Then just build concrete walls that follow the line of the canal banks and seal off the water table to form a six-story watertight labyrinth.

But the only way to create a stable construction site for the massive excavation on Amsterdam’s marshy ground is to fill in the 17th-century canals with sand and dig down through them. As engineers hollow out each 1,000-foot stretch of ground, they will reuse some of what’s removed to fill in the next stretch of canal, creating a second dry site. Once the outer support walls and top two floors of that stretch are done, they can reseal the canal floor and let the water flow back in.

The space will span 31 miles of canals and contain roads, malls, sports arenas, and anything else you’d find above-ground—except, of course, sunlight.