The world’s tallest building took five years to reach its 828-meter, 2,716-foot height, but a Chinese company wants to leave...

China's planned new skyscraper will be the tallest building in the world, overtaking the Burj Khalifa by 10 meters. CNNGo
SHARE

The world’s tallest building took five years to reach its 828-meter, 2,716-foot height, but a Chinese company wants to leave the Burj Khalifa in the dust. Broad Sustainable Building, which already built a hotel in two weeks, aims to erect the new Sky City skyscraper within three months.

The 220-story building would be the tallest in the world by 10 meters, according to CNN, which first reported on the construction plans. It was designed by a Dubai architect, in an interesting twist. The company would use pre-fabrication methods to construct it in record time — 95 percent of the building will be built before the ribbon is cut at the ground-breaking ceremony.

Despite its gargantuan size, the building will supposedly use one-fifth the energy of a traditional edifice, because its 6-inch-thick walls and quadruple-glaze windows will provide better insulation. When it’s complete, 104 elevators will connect 220 floors and 1 million square meters (10.7 million square feet) of usable space. This will include the world’s tallest hotel, living space and potential office space.

In an interview with Xinhua, machine-translated from simplified Han Chinese, BSB chief executive officer Zhang Yue said the company wants to break ground in November, and that the tower will be completed in January 2013.

If this seems overly ambitious, note that BSB has apparently done it before, albeit not on this scale. In December of last year, the company erected a 30-story hotel in 360 hours; watch a time-lapse video below.

Government agencies still have to approve BSB’s plans, but the Wangcheng district in Changsha, Hunan province, is already on board, CNN reports. We can’t wait to see the time lapse video of this one. 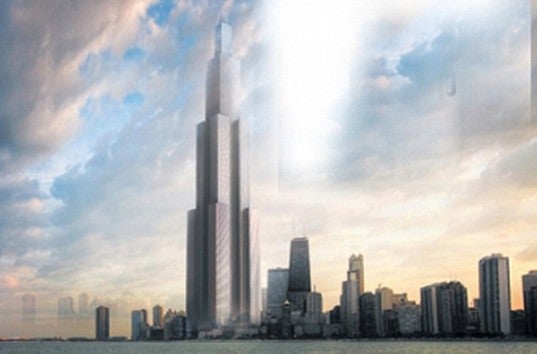