Already under construction, these two projects are saving humans from having to work in two of the most inhospitable environments... 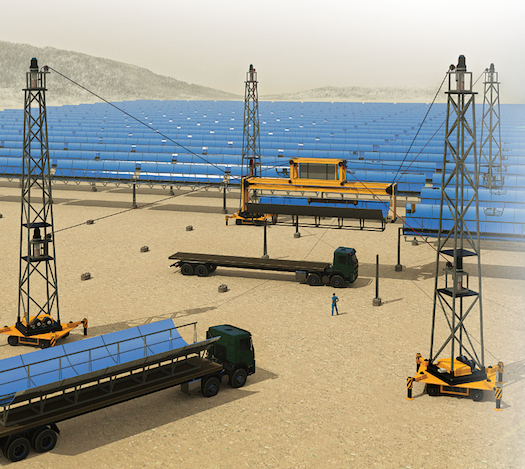 Already under construction, these two projects are saving humans from having to work in two of the most inhospitable environments on the planet: the Sahara Desert, and the South Pole in Antarctica.

BUILDING IN THE SAHARA

The Fraunhofer Institute for Manufacturing, Engineering and Automation in Stuttgart, Germany, is developing a robot to construct a 2,270-square-mile solar farm in the Sahara. The 100-ton Industrial Parallel Kinematics device (IPAnema) is similar to the Skycam that hovers above the field at NFL games: 2,000 feet of polyethylene cable strung between four mobile towers suspend the end effector, a box with jaws built for grasping solar reflectors. IPAnema will be ready for work in 2015.

End Effector: Built for grasping and lifting, the steel and aluminum end effector delicately picks up and places thousands of seven-ton, 40-foot-long solar reflectors. It then sets them down anywhere within the 26,896 square feet between the four support towers.

Winches: The IPAnema’s motor-driven winches rapidly spool and unspool eight cables that control the suspended end effector. The winches rotate the end effector on all three axes at almost 3 mph, and each cable can support nearly 10,000 pounds.

Force Sensors: At each end of the cable, attached to both the winch and the suspended end effector, are force sensors. The sensors synchronize the winch motors to within two milliseconds and track the end effector’s movement in space within millimeters.

Support Towers: The robot’s framing system—four modular 36-foot-high steel pylons—arranges itself on automated bases. The four towers create constant tension to prevent the payload from swaying, which will help secure it against accidents in high desert winds. —by Arnie Cooper 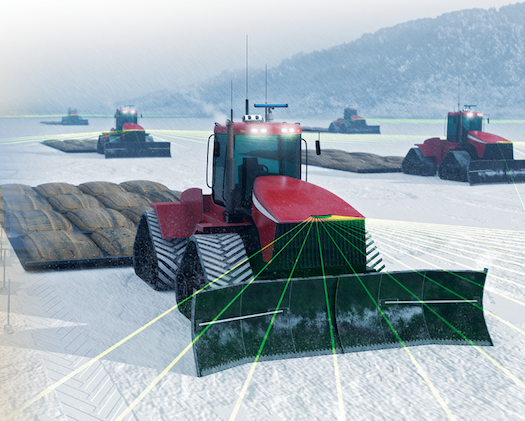 This winter the National Science Foundation and one of its contractors, Raytheon Polar Services, is shuttling fuel 1,040 miles from its coastal Antarctic base, McMurdo Station—the primary American logistical hub—to the Amundsen-Scott South Pole Station. A century ago, Norwegian explorer Roald Amundsen became the first man to reach the pole. He used sled dogs and skis; the NSF and Raytheon will soon use automated Caterpillar and Case tractors. The robotic vehicles will crawl across the continent at 5 to 12 mph for 24 hours a day, accomplishing in just a week and a half what took Amundsen nearly two months.

Bladders: Each tractor hauls at least ten 3,000-gallon fuel bladders and consumes nearly two of them during the 2,080-mile round trip.

Lead Vehicle: Onboard computers will determine the ideal speed and direction to maximize fuel efficiency, relaying the information to the rest of the fleet. Algorithms determine the “threat” of objects and reroute the tractors accordingly.

Twin Cameras: Positioned about a foot apart, the two cameras create stereographic imagery to distinguish between a pile of snow, a snowmobile, a person and an open crevasse. Then the cameras gauge the object or feature’s distance.

ARS-300 Radar: The vehicle uses its radar (the same kind Google has on its self-driving cars) to “see” through storms. Although the radar cannot read surface structures as accurately as the tractor’s laser scanners can, driving snow confuses the laser.

** Laser Scanner:** The tractor’s laser scanners fix on details in the terrain—up to 200 feet away—to create a map that is uploaded to the computer and used for navigating. The scanner also helps avoid collisions between tractors. —by Andy Isaacson